It’s confusing.  When you type in “Limp Bizkit’s new album, in Google — “Stampede of the Disco Elephants” comes up.  What the heck is a “stampede of the disco elephants”?  Why the long long ten-year wait for an album?  What were they doing during the 2010s? Is Fred really a middle-aged dad as he appeared to be at Lallapalooza?  I have so many questions.  Well, Wes had some, but not all answers in the quote below. 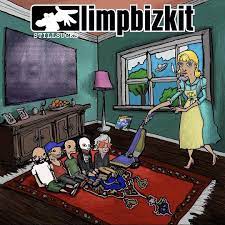 Borland provided an album update in June 2021, detailing the struggles with the album:

We’ve probably, in the last 10 years, been in the studio to try and complete the record, I wanna say, seven times, to different studios. And we’ve been working on stuff, working on stuff, working on stuff. And Fred [Durst] has been consistently kind of unsatisfied with where vision is, I guess…We probably have 35 songs recorded instrumentally, and he’s done vocals on them and then thrown the vocals away — done vocals and then [gone], ‘Fuck this,’ [and] thrown it away. So I think he’s finally at the point now where he’s gonna pick a set of these songs that he’s finally cool with and finish ’em and we’re gonna finish the record. So, fingers crossed.” (thanks Wikipedia)

The album is musically interesting at points as Wes is fantastic at his instrument.  It’s mostly enjoyable and head nod worthy.  There are a few shiny non-precious gems, and a few just rocks.  At times it’s silly and I wonder why Durst was so insistent on perfection; it’s a Limp Bizkit album after all.

The first three songs, “Out of Style,” “Dirty Rotten Bizkit,” and “Dad Vibes,” will likely capture you, you’ll think you are on to something…but you’re not.  The first three are the gems.

I think if you are a Limp Bizkit fan you’ll surely love it…after all, you’ve been waiting for 10 years to hear it.  I also think that if you are new to Limp Bizkit, or not really a fan of the band, I am not sure it will capture you.  Perhaps seeing them live will be the ticket on this one.