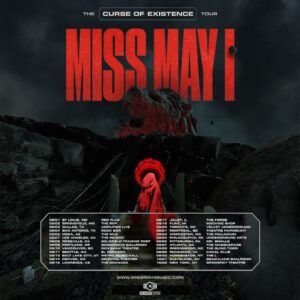 Local Portland metal band Illuscence snuck on the bill and launched the show a half hour early!  I was so happy that we were in and searched prior to their start.  I hadn’t seen this band before but am glad I had the chance.  They have the potential to be among the heavyweights of the Portland metal scene.

Up next was my second favorite of the night, France’s LANDMVRKS.  Full of energy and talent, they were humble as they were thankful for being in Oregon for the first time.  Young, but mighty, vocalist Florent Salfati was spectacular; the whole band was.  Groove driven, gnarly breakdowns, clean and dirty vocals, singing, talking, it was just fantastic.

Up next was Kingdom of Giants.  Guitar heavy, bouncy, innovative, passionate, angst driven, Northern California’s melodic metalcore men stole the night!  They were stellar.  I’m looking forward to what they do next after 2020’s Passenger release.

Currents is a band that can pretty much do anything.  Clean and pretty, dirty and controlled chaos.  Heavy guitar driven riffs, breakdowns, everything you’d expect from a great metalcore band and more.  Currents were well placed in order of support for Miss May I.  With so many bands in this genre, finding a band that sounds different is hard to do.  The difference between Landmarks, Kingdom of Giants, and Currents were all audible and visible.  Whoever put this tour together really did a great job.

Lucky for us, Miss May I’s “Curse of Existence” LP was released on the day of the show.  Ohio’s metalcore Miss May I tore the stage up!  With obvious influences that run the gamut of bands, they played an aggressive set with both with beauty and guts.