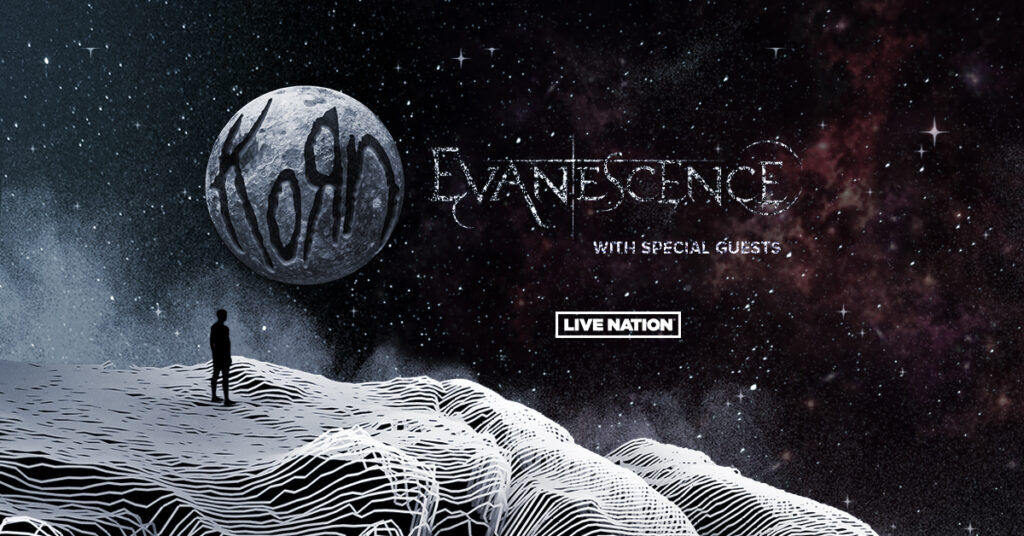 Getting to this venue seems to always be a bit of a struggle, but no matter how hard, I was not missing this show. Even though this was my twelfth time seeing KoRn, I still get super excited. Plus, I was looking forward to seeing Evanescence.  The last time I saw them it was with an orchestra when they co-headlined with Lindsey Stirling at the same venue.

There was a traffic jam, which made it to when we finally parked, walked to the gate, and found our way inside, the opening band was already on stage halfway through their set.

The opener was Dana Dentata, a shock rocker really in her very own category. Unfortunately, I missed her by the time I was able to get inside.  The chatter from fellow concert goers was mixed. Some didn’t know what to think, some loved it, and some just thought it was ok but not for them.  It really sounded like she gave quite a performance that would stand out in people’s minds, even if they didn’t love the music.

Next up was fellow nu-metal rockers, P.O.D. from California.  These guys have been around since 1992 and man, some songs took me back to my high school days back in the early 2000s. Kicking off their set was my personal favorite “Boom,” from the 2001 album Satellite. The guys from P.O.D do not seem like they have aged. The energy and sound were on point. Even though some of the songs transported me to a simpler time in my life, I was also reminded that there were still problems back in the early 2000s that we are still unfortunately dealing with today. Especially with the song “Youth of the Nation.”  It’s crazy how relevant that song still is. When the packed amphitheater sang back the chorus to the band, it absolutely gave me chills.

P.O.D did not disappoint; I am really glad they were part of this tour.

Keeping the nostalgia going, solid rock group Evanescence took to the stage next.  To say they put on a great show is a huge understatement. Every member of Evanescence filled the stage with great energy, moved around, and looked like they were enjoying themselves as much as we were.

Looking around, I notice that the crowd was not moshing as much as they were for P.O.D., but I think that is just because Amy Lee’s voice is so mesmerizing. Amy Lee has that voice that captivates and holds us fans by the heart. The beautiful sound juxtaposed with heavy rock music is a masterpiece. Lee shifts between soft and melodic, to powerful and demanding with ease.

All members of Evanescence kept the energy flowing.  The setlist mixed perfectly the old with new and soft with heavy.

Right before “Use My Voice,” off of their fifth studio album, The Bitter Truth, Amy took a moment to say, “do not to let anyone take your rights — your choice away.” With the background screen showing videos of protest, possibly from these last couple of years, it sent shivers down my spine.

“Bring Me to Life,” the song that catapulted their popularity, was a treat.  They brought up Sonny Sandoval from P.O.D., to take on the male vocals.  It was a match made in heaven. The crowd was so excited, it felt as if the venue itself was pulsing.

Music has a way of taking you back, or giving you that sense of empowerment, helping to mend a broken heart, etc. Evanescence gave just that; so much heart and soul on each song performed.

Finally, the reason why I was there, my all-time favorite band, especially to see live, Bakersfield, California’s own, the almighty KoRn!

To be in a place full of people enjoying amazing music, feeling every sound, lyric, and taking in all the visuals, is therapeutic. The track playing as KoRn took the stage was their song “4 U,” off their 1999 album Issues. A screen was placed in front of the band as KoRn played their first two songs. I must say, I am not a fan of the screen. It might be cool as a visual effect, but I much prefer the curtain that drops at the most opportune moment, giving us a visual of our beloved band. When the screen rose from in front of the band to above the band, I was pleased.

Even after all these years of KoRn touring, they still have so much energy and seem to enjoy playing songs they have played thousands of times. And as a fan, I appreciate that because I enjoy hearing and seeing them play the spectrum of their discography.

At one point, Jonathan Davis mentioned how they are celebrating 20 years of the album Untouchables, one of his personal favorite albums.  He said he doesn’t believe it could be made today. So, in honor of that, they played “Alone I Break,” which was one of my favorite parts of the show. I felt like it was therapeutic for Jonathan Davis to sing that song, as I am sure it was therapy for him to write it.

Another amazing part of the show was, of course, the encore. The last song played was “Freak On A Leash,” and Amy Lee from Evanescence came out to sing with Davis. Amy Lee, a self-proclaimed KoRn fan herself, did an amazing job, and you could tell she thoroughly enjoyed it. Two amazing vocalists singing one iconic song, what a way to end the show.

I personally could have watched KoRn perform for hours more; I wanted more.  This being the last stop of the tour, Jonathan thanked each band, crew, and the audience. He said: “I get to go home,” giddily, which I thought was awesome.

Sure, touring is part of your job as being part of a touring band, but after months of touring, I am sure getting to go home is something they really look forward to.

If you haven’t seen KoRn live before, you really should. You can thank me later.