You know that feeling that you have of a band…that perception?  Well, until I’d met John 5 a few years ago, I had a particular way I thought of Marilyn Manson. “John 5 licked my asshole” was the biggest thing I remembered from the DVDs. After meeting John 5, however, I felt a completely different way.

Canada’s (via Las Vegas) Palaye Royale opened the show. I was initially confused because I thought they were a three piece, but six of them came out. I was as familiar as I could be from YouTube, and I think they delivered what they promised from their videos.

I always feel like the opening band, especially one opening up for such huge giants as Zombie and Manson, should get the crowd ready, but be somewhat humble. Humble Palaye Royale was not. Scorching the stage like they were Aerosmith, this “The Darkness-esque” band was all over the place…literally. The stage presence of the Rolling Stones, with the sound of My Chemical Romance, they seemed an odd fit to open for the mighty duo. But I also don’t think you could ever have a good fit unless the tour was the “Triplet of Evil Tour” with Powerman 5000 or Static X (RIP Wayne Static) or Drowing Pool or even Ministry.

The anticipation was high for Marilyn Manson; you could feel it in the room. Meh. It 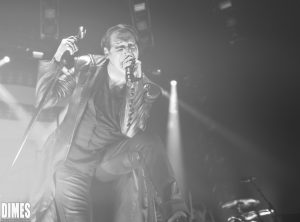 would be mean to write this review from my notes taken at the show. I’ve had a day to reflect and it will pack less punch. I guess I was expecting the Marilyn Manson of the 90s. And I do know it’s not exactly fair to compare an artist years later to their career high, but I have no other reference.

“The Beautiful People” was the highlight song-wise, but what I could not get over was the lack of energy that he exuded up until that point (which was the end of the show). By all accounts he is a man, however he tended to pout on occasion: “If you guys boo again, I’m going to walk off the stage,” dropping the mic after a song, etc. Through all of the costume changes and the paint masking his face, it felt to me like he didn’t really want to be there. Sloth-like movements, sort of like a Vegas lounge act, I was mostly engaged by wondering what he would do next…would he, or wouldn’t he have another tantrum?  Would he play a long set like he did in Montana, or would he play a short six song set like he recently did?  I’m glad I was able to finally see him live. I know the impact he has had on our culture; I know the magnitude of his fame and infamy. I applaud him for still doing this. But I wish he would have delivered his half of the advertised duo; sadly, in my opinion he did not. Halfway through “The Beautiful People” was what I had expected for the entire show. He finally gained momentum and the end of the show and it was leaps and bounds better than the first part. He dropped the expected “Irresponsible Hate Anthem” and “Coma White” for unknown reasons.

As Rob Zombie and his marvelous band took the stage,  I wondered how Marilyn Manson’s guitarist had felt knowing John 5 was to follow. John 5 and all of his brilliance always steals the show for me. However, on this night…I’d say he was slightly…. slightly…over shadowed by Mr. Zombie.

The fractured stage screens functioned as one, and played interesting visible translations of the sentiment of each song. “Portland, I should warn you. I do not get tired,” Rob Zombie opined, and he didn’t. With 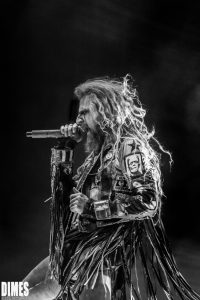 the energy of a 17-year-old high school lettered athlete, he danced, jumped, wiggled, and sang as if he was doing it for his life. Vocally great, musically great, theatrically great, Rob Zombie is a class act and brilliant front man.

“Ladies of Portland scream!  Ladies…where you at?”  “If you want to party scream ‘Mother Fucking Party,” Zombie yelled to a lacking response. “That was terrible,” he said. “If you want to mother fucking party, scream MOTHER FUCKING PARTY!” and finally Portland did.

Advertised as a two-night Rockfest with Disturbed and In This Moment the following night, the radio station(s) were nowhere to be found on night one. Yes, they had a ticket give-away in the parking lot of a local car dealership, but there was no visible radio station representative on stage. The chatter on social media immediately following was that you can’t have a Rockfest indoors, this was no Rockfest, and Portland NEEDS a Rockfest. Money, however, was well spent on these tickets for Rob Zombie. He climbed upon the barrier between the stage and the floor and sang to the people frequently. He took a walk around the floor of the arena during John 5’s solo. He had giant monsters. He had giant aliens.  “People wonder what it was like back in the day? Well, this is what it was 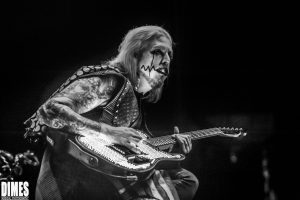 Towards the end of the long, intense, exciting, and entertaining set he played the trailer for “3 From Hell” his newest movie that comes out September of 2019. Immediately following the plug he brought out Marilyn Manson to sing a duet of “Helter Skelter.”  There wasn’t much interaction between Manson and John 5 until the end when Manson walked behind John 5 and draped his hands around John 5’s neck as if to pull him backwards. I wondered how John 5 felt about that. 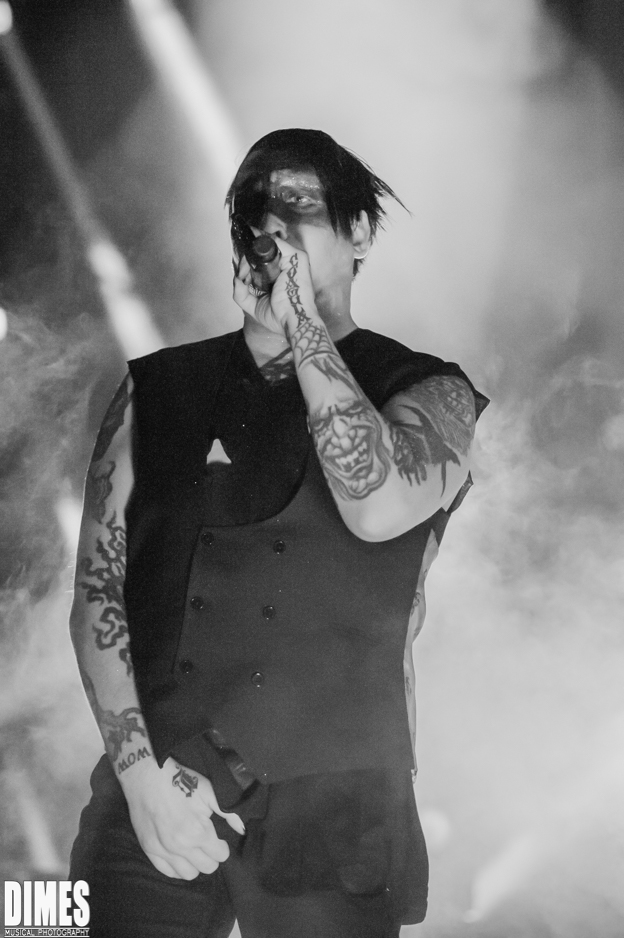 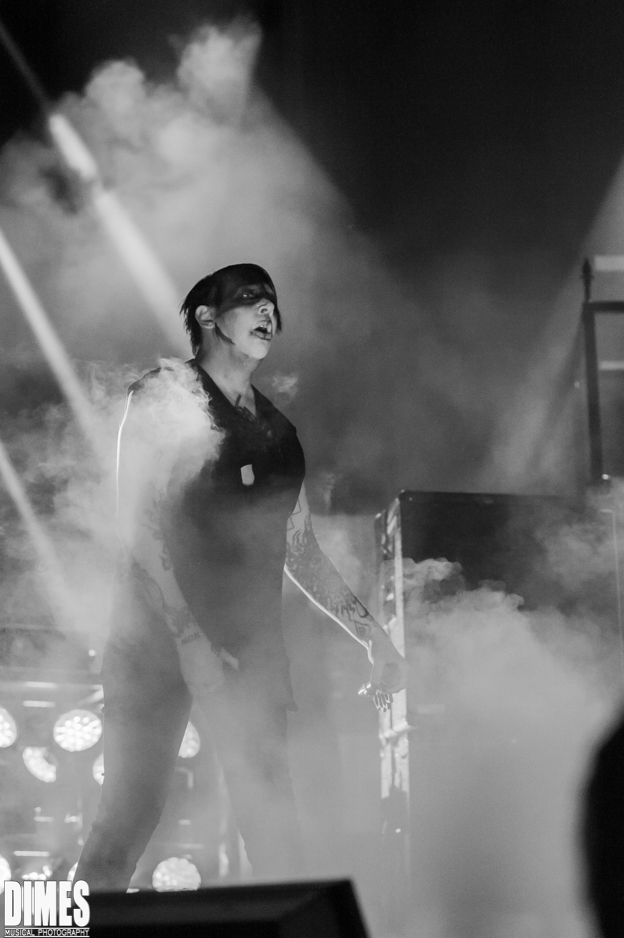 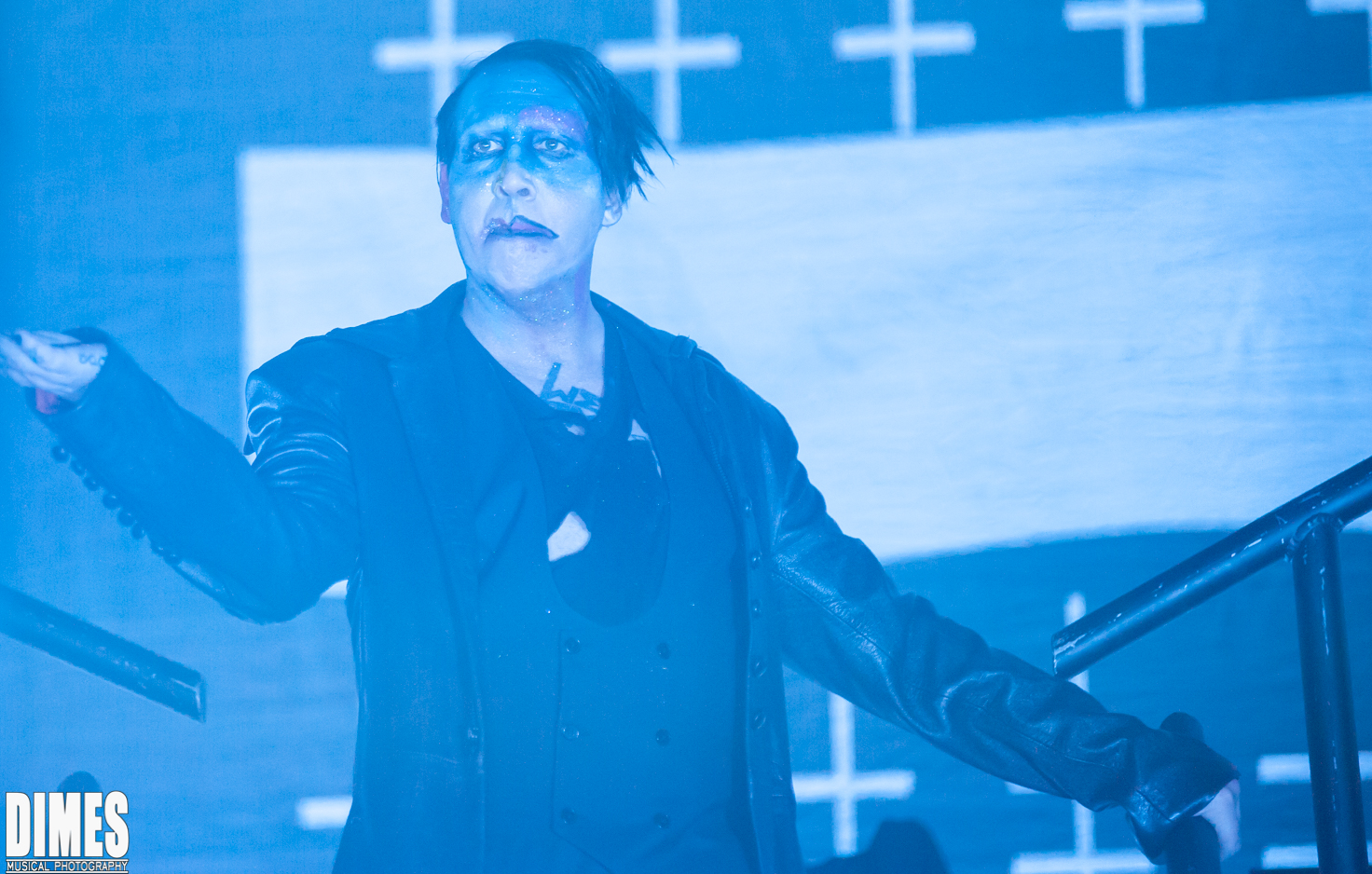 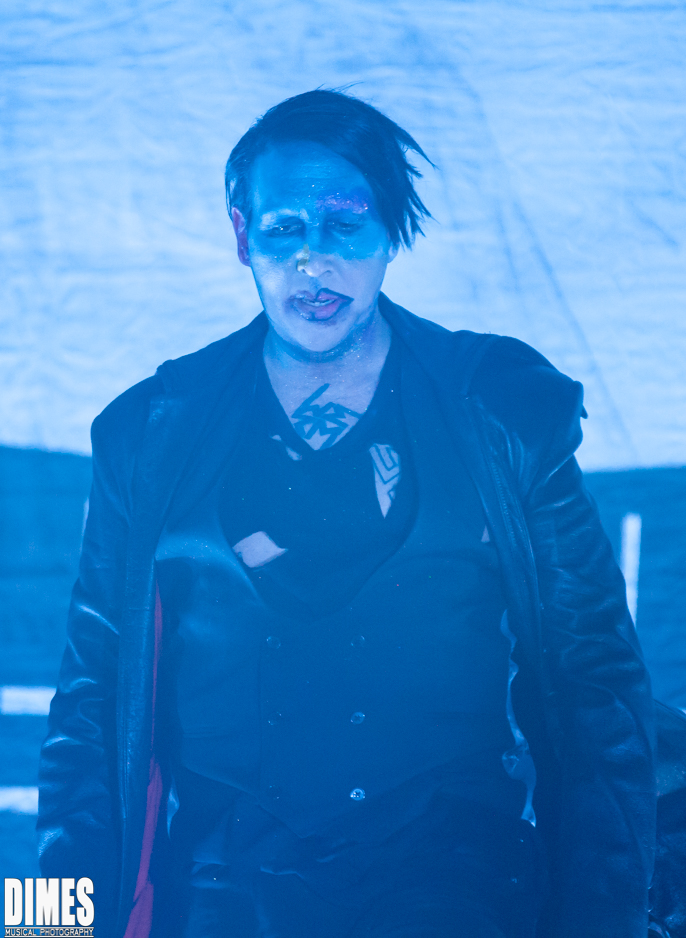 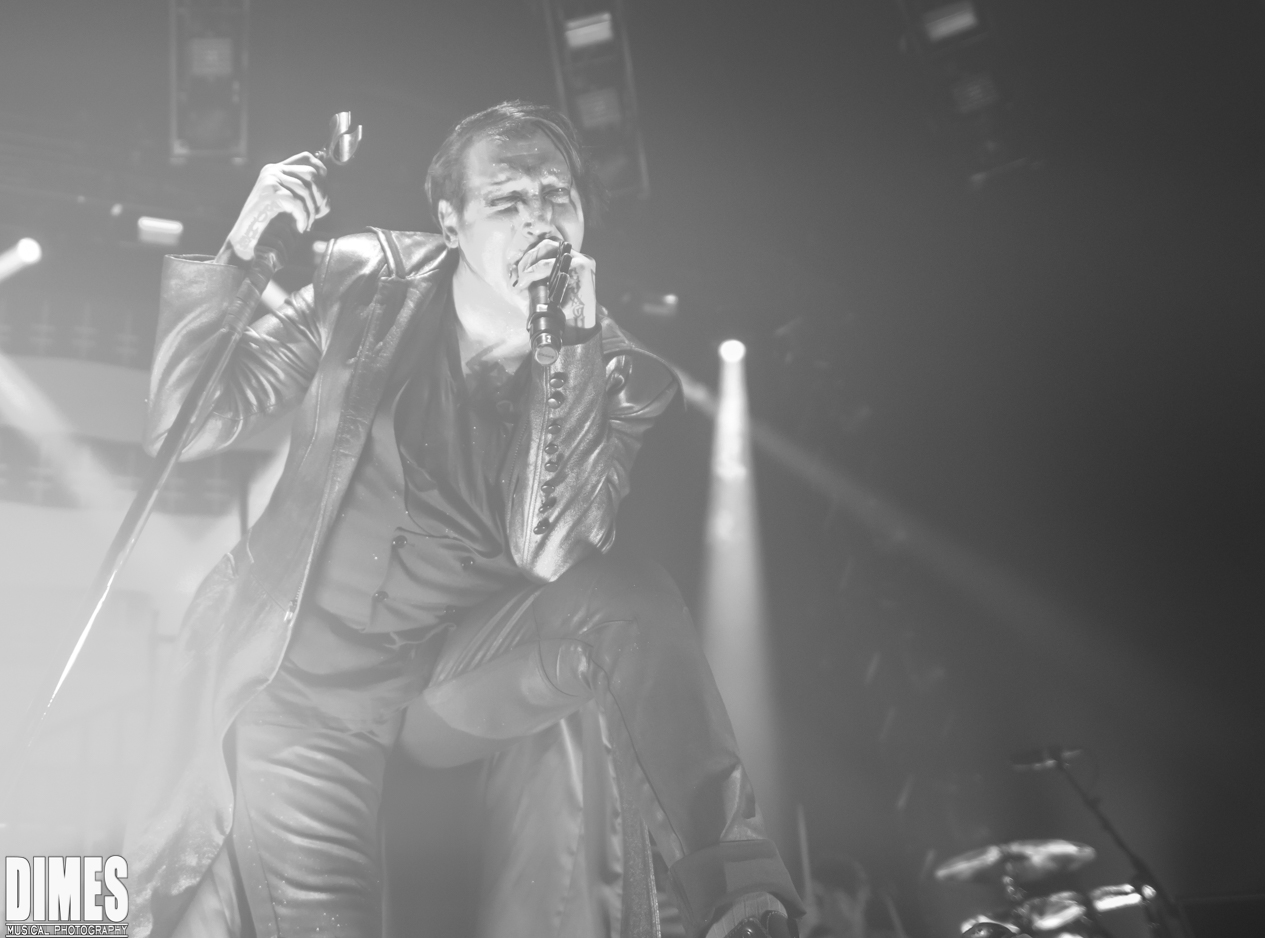 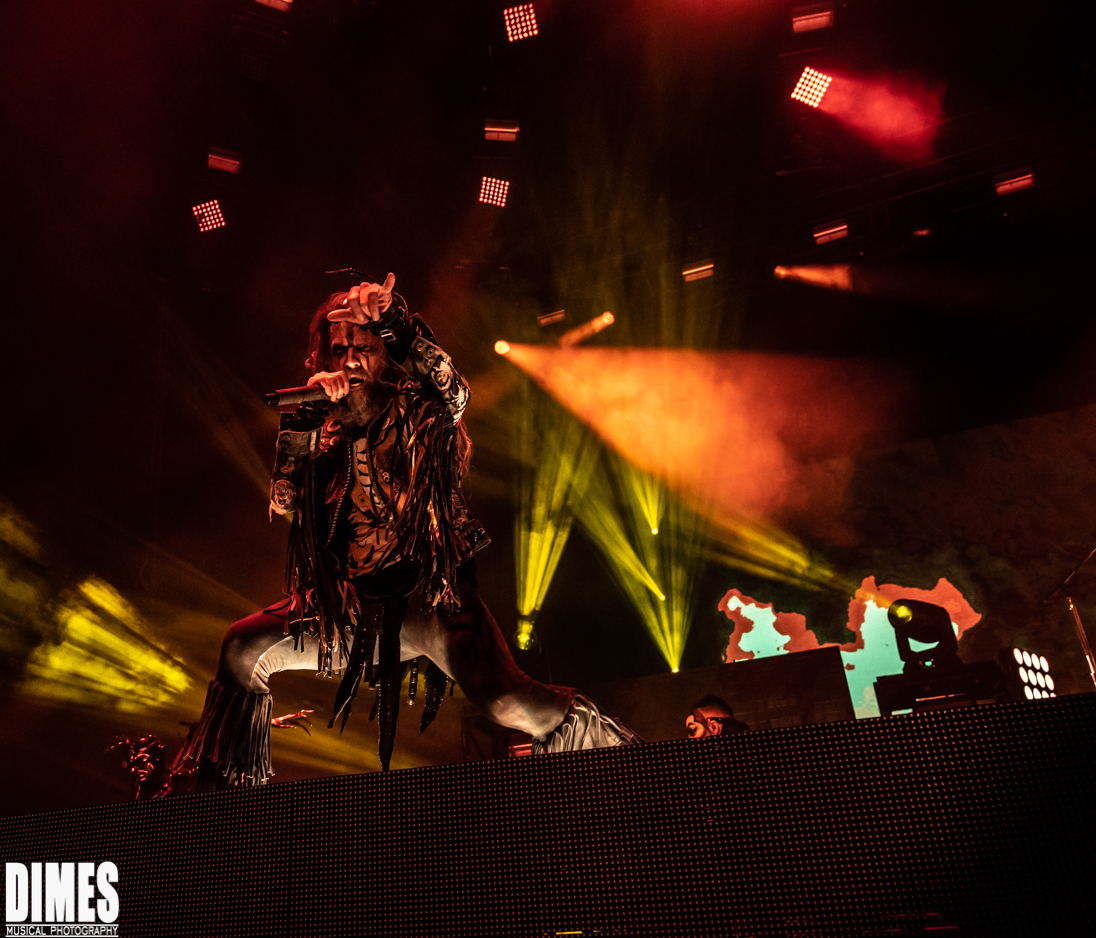 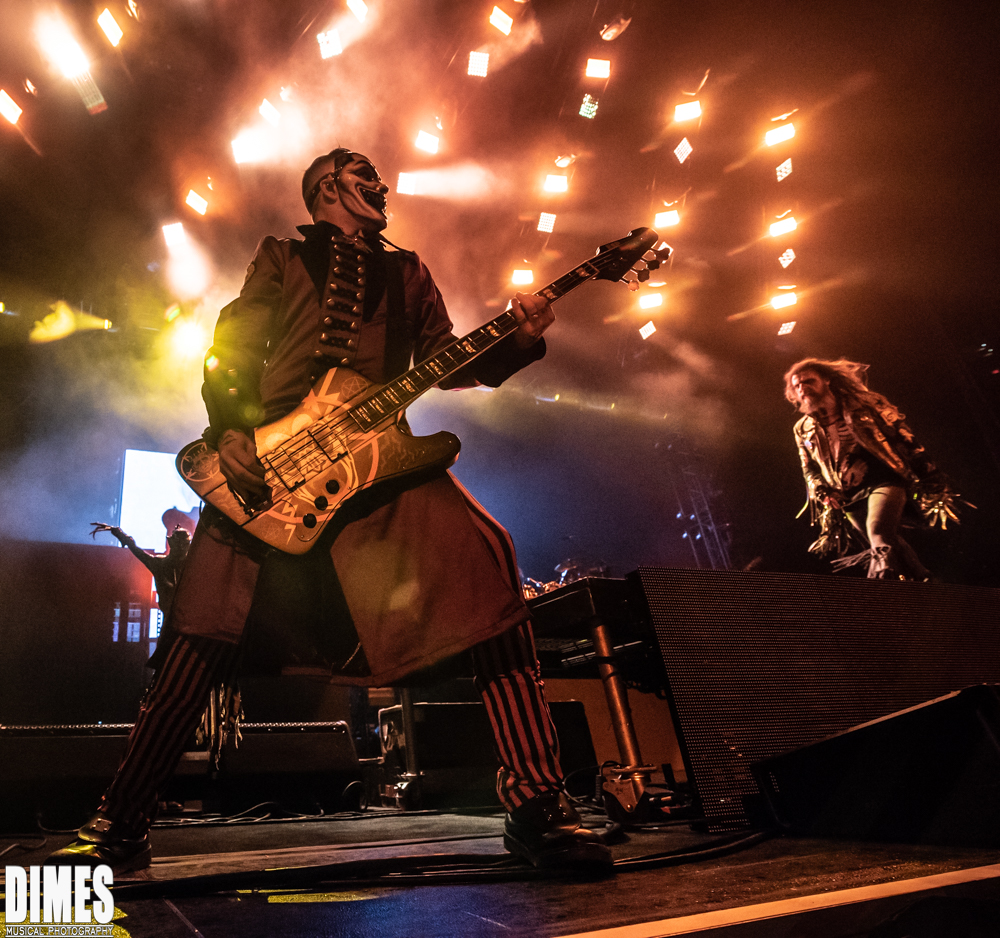 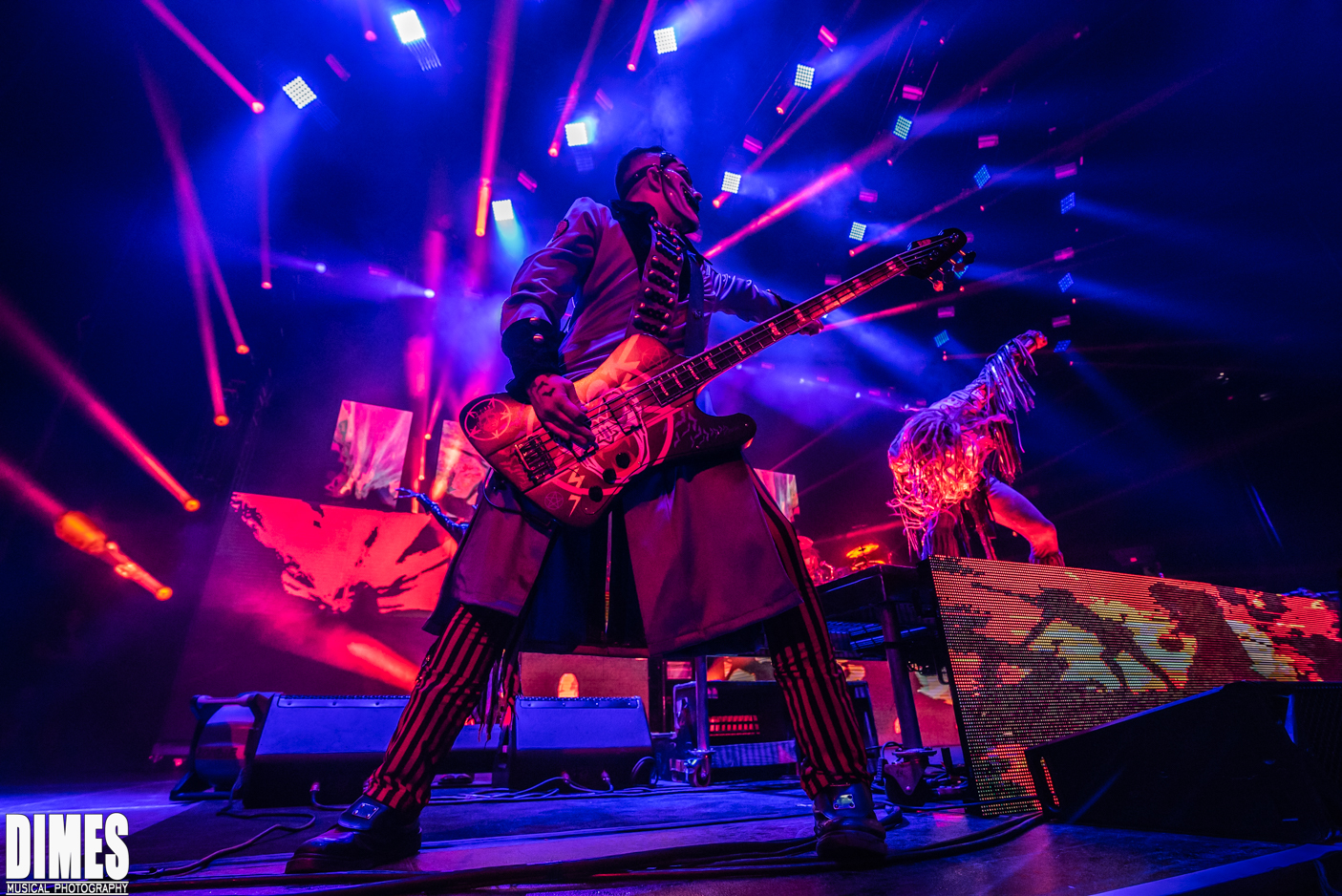 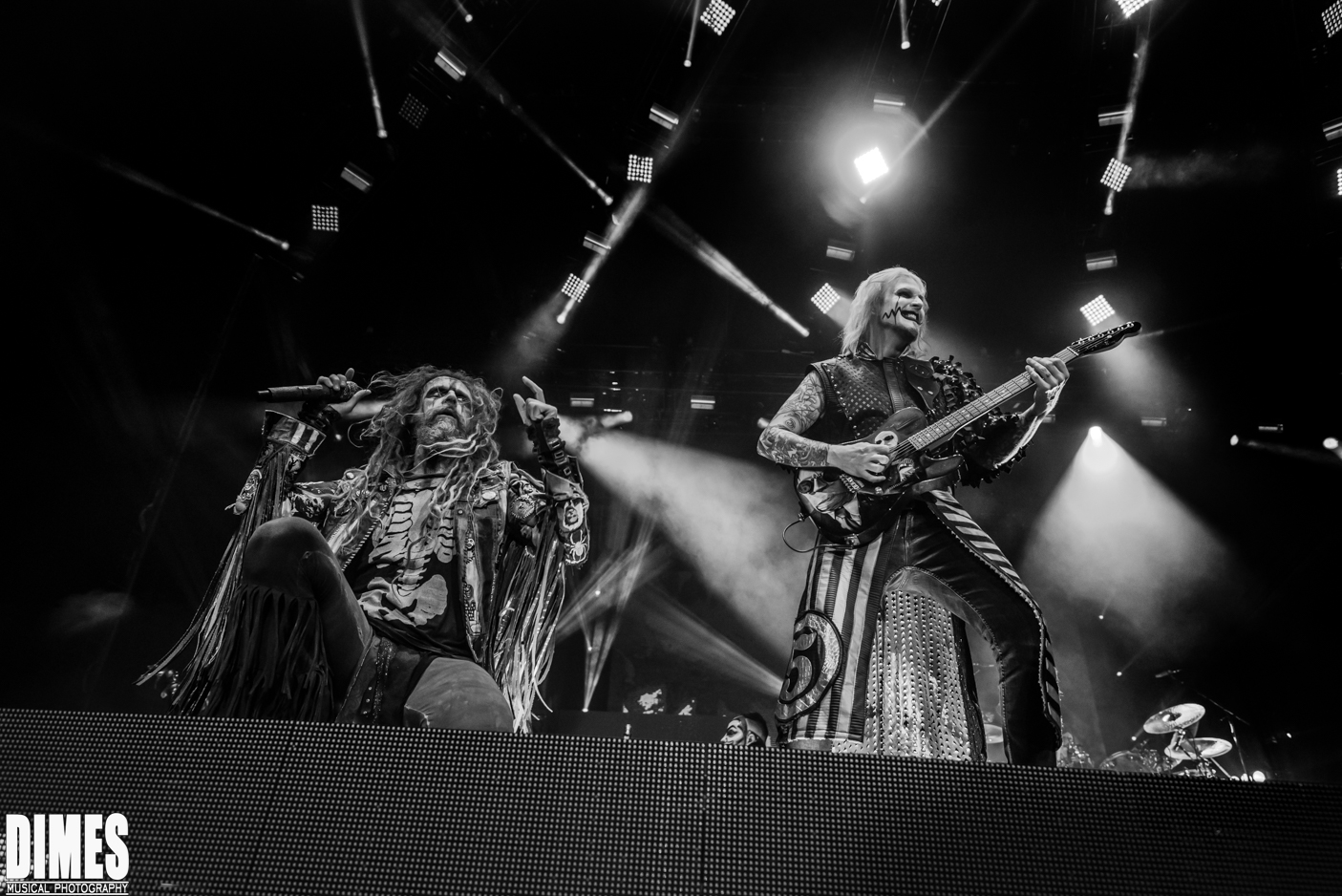 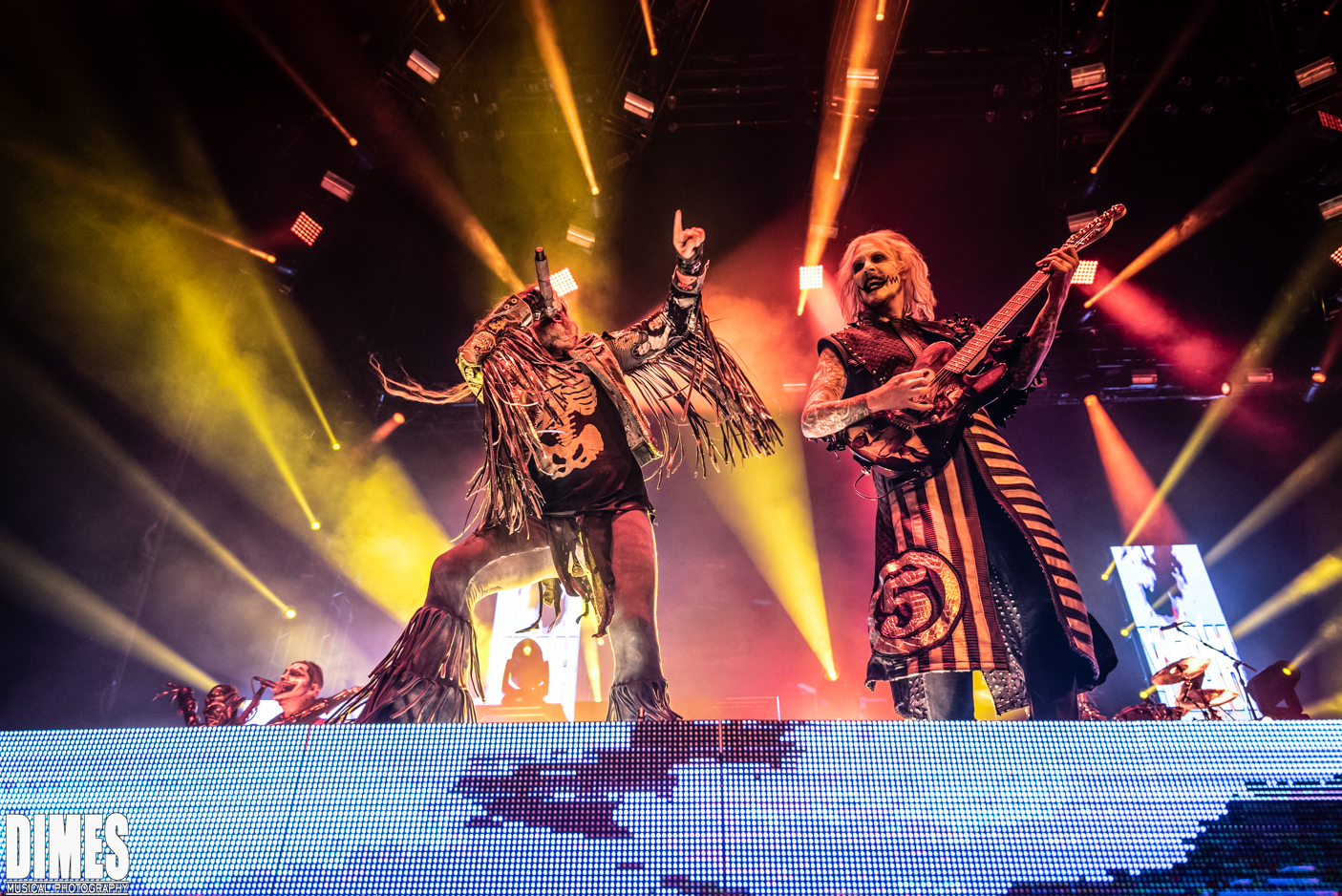 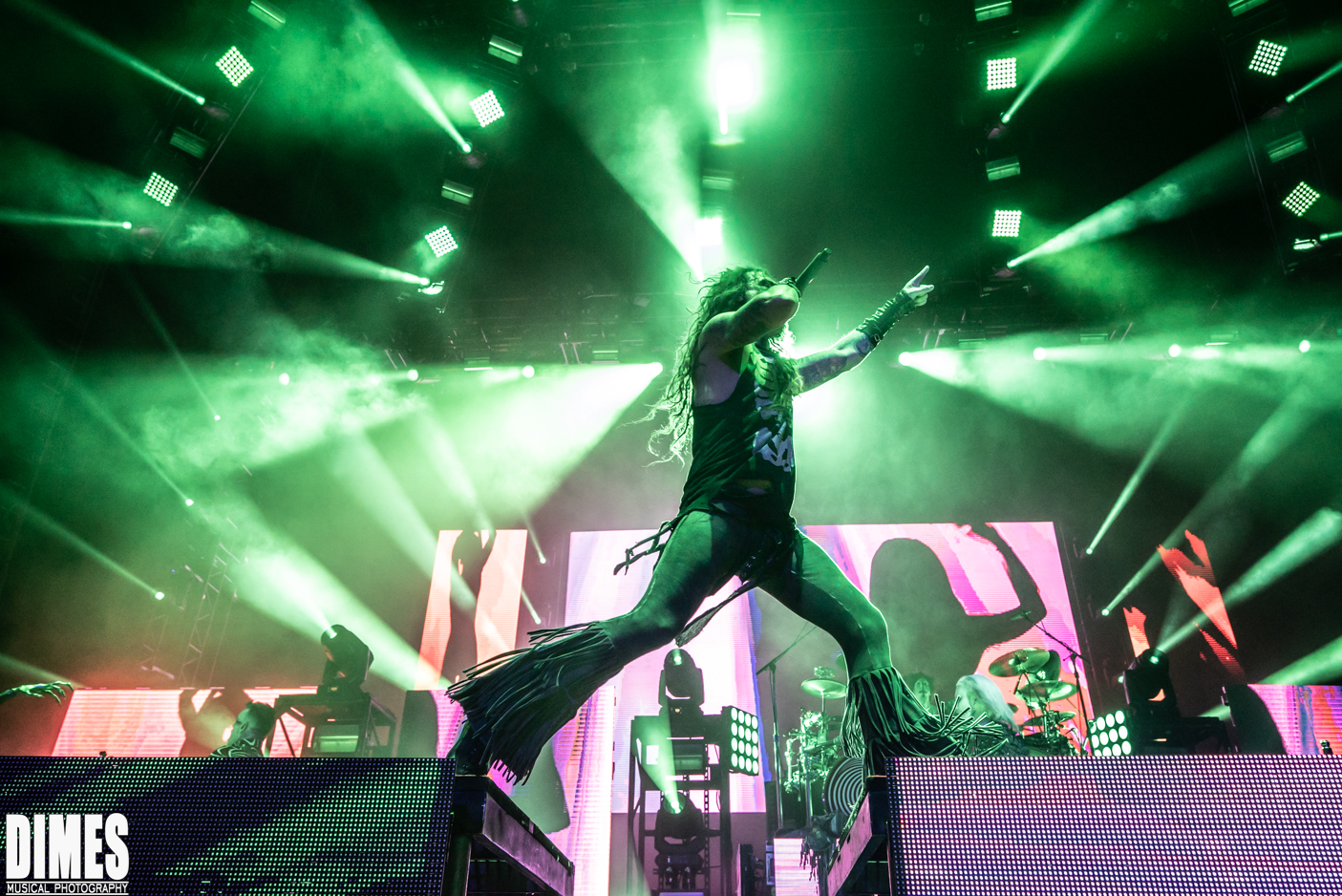 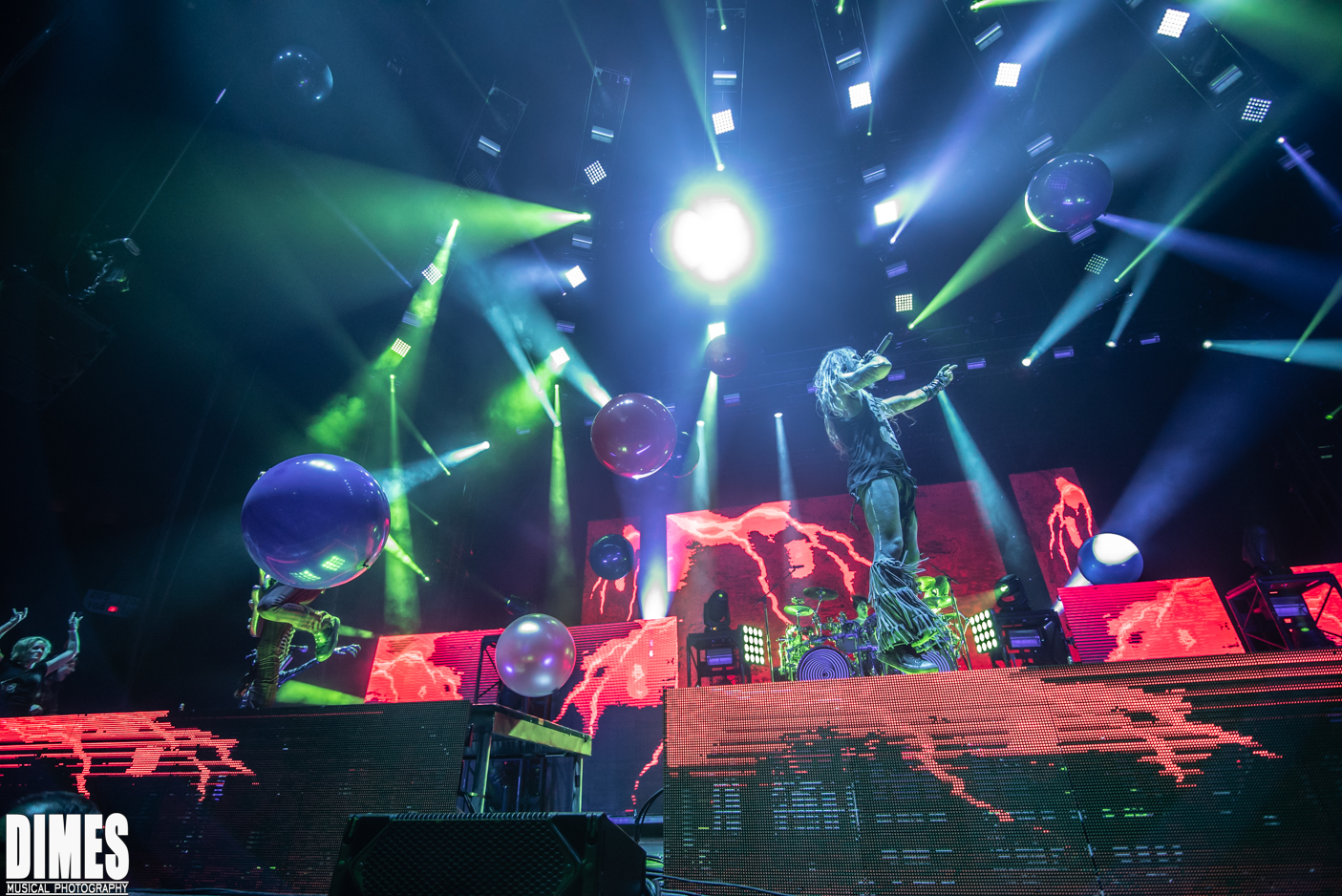 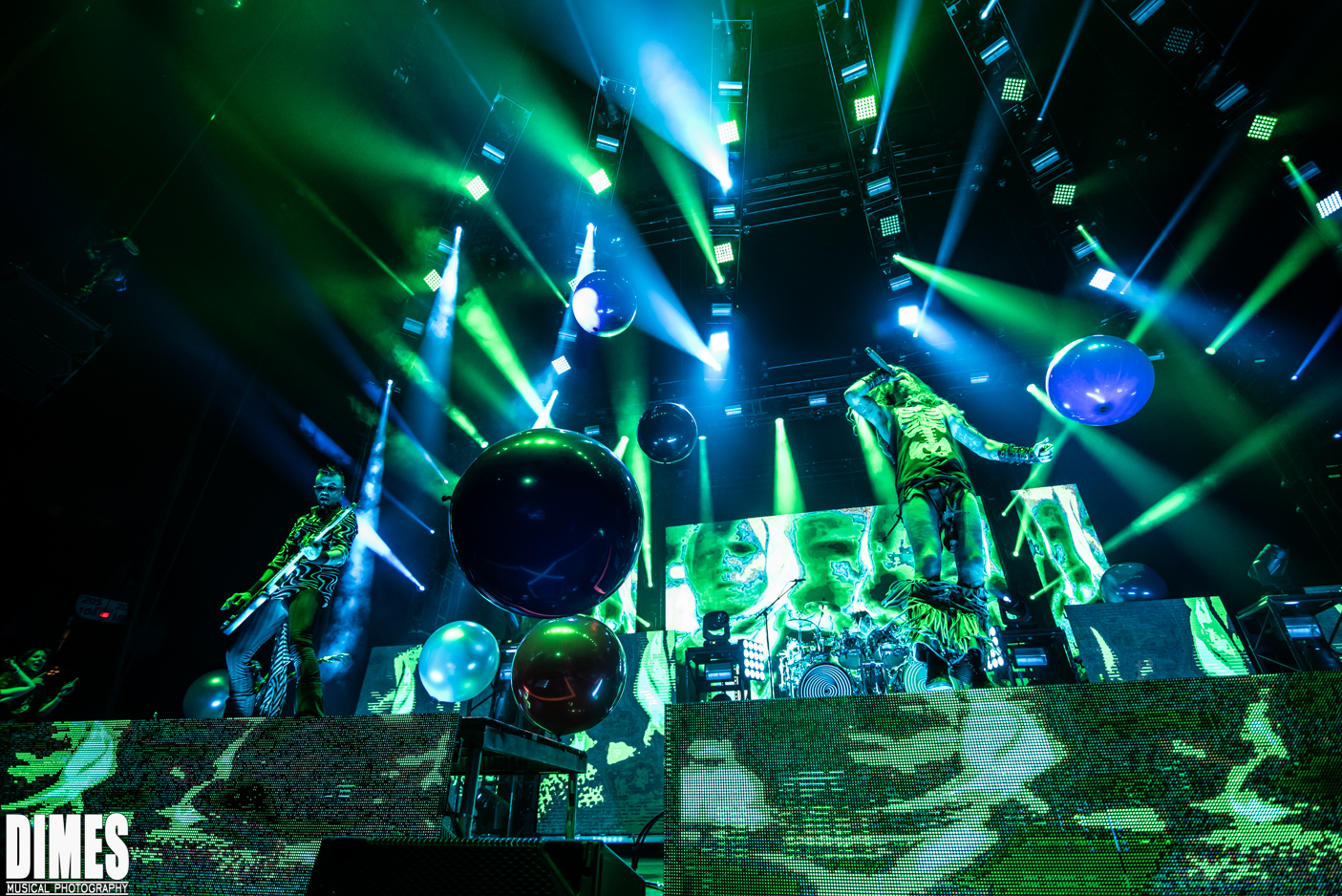 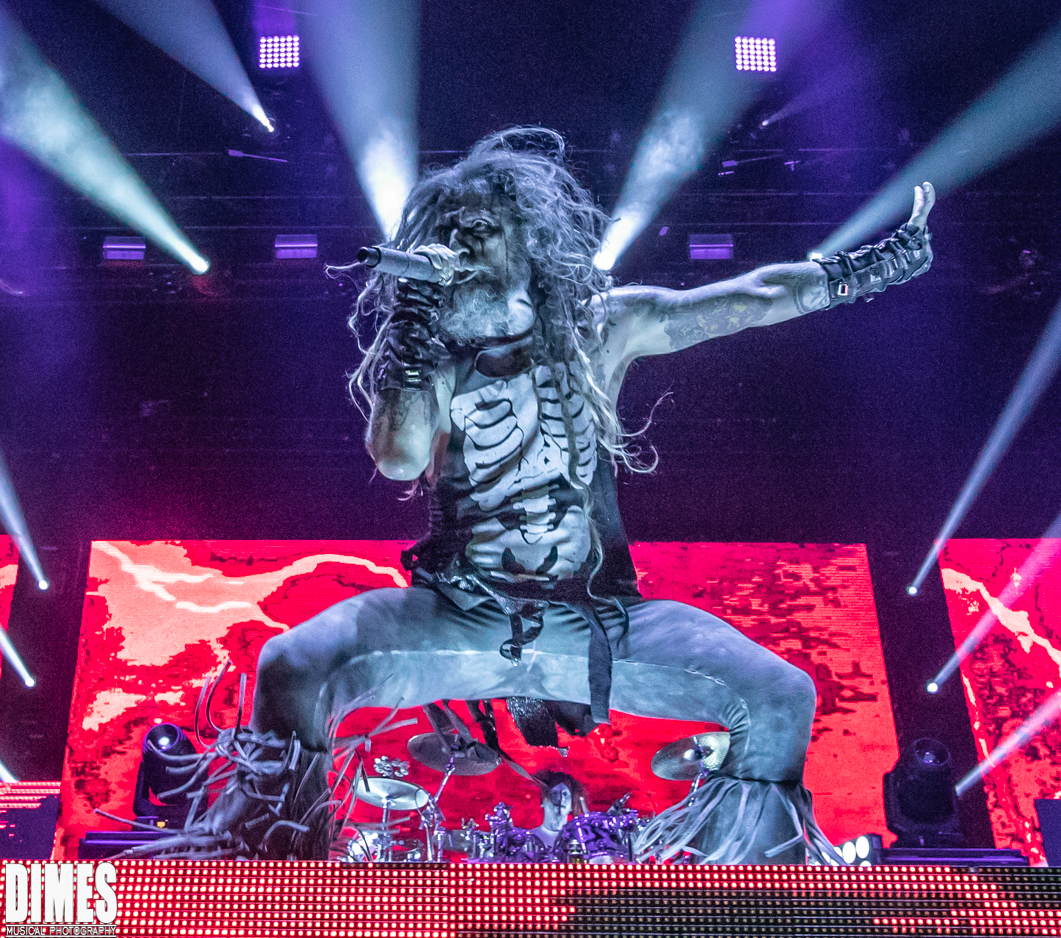 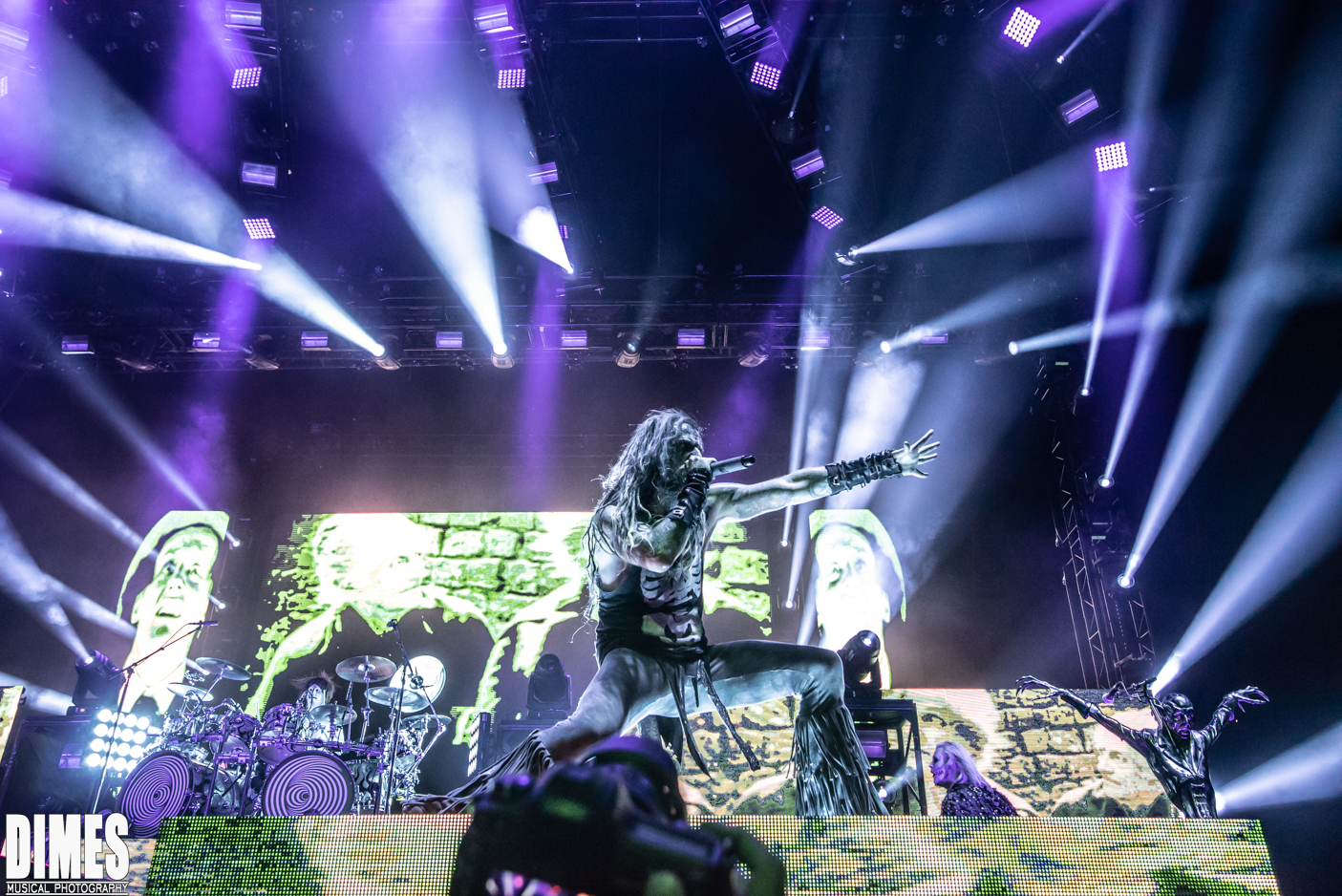 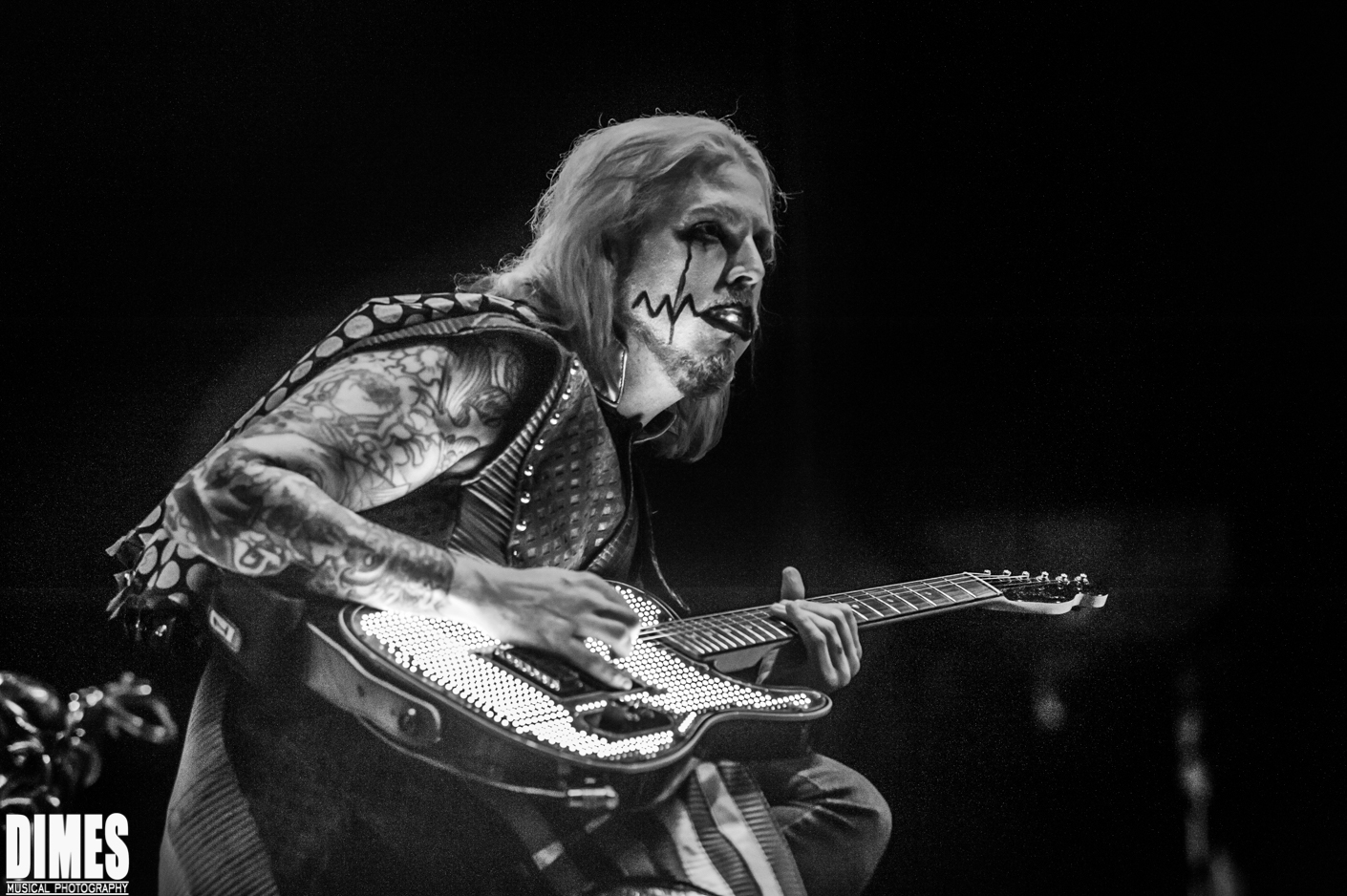 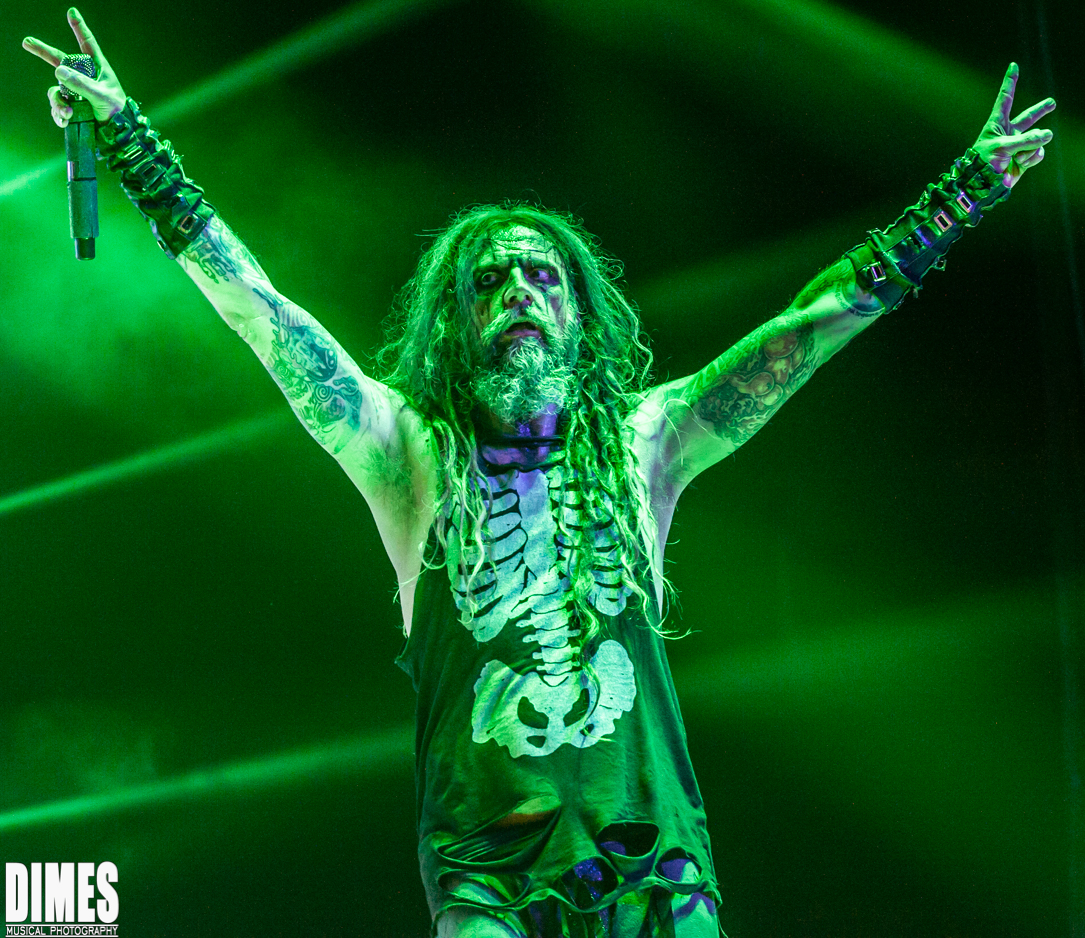 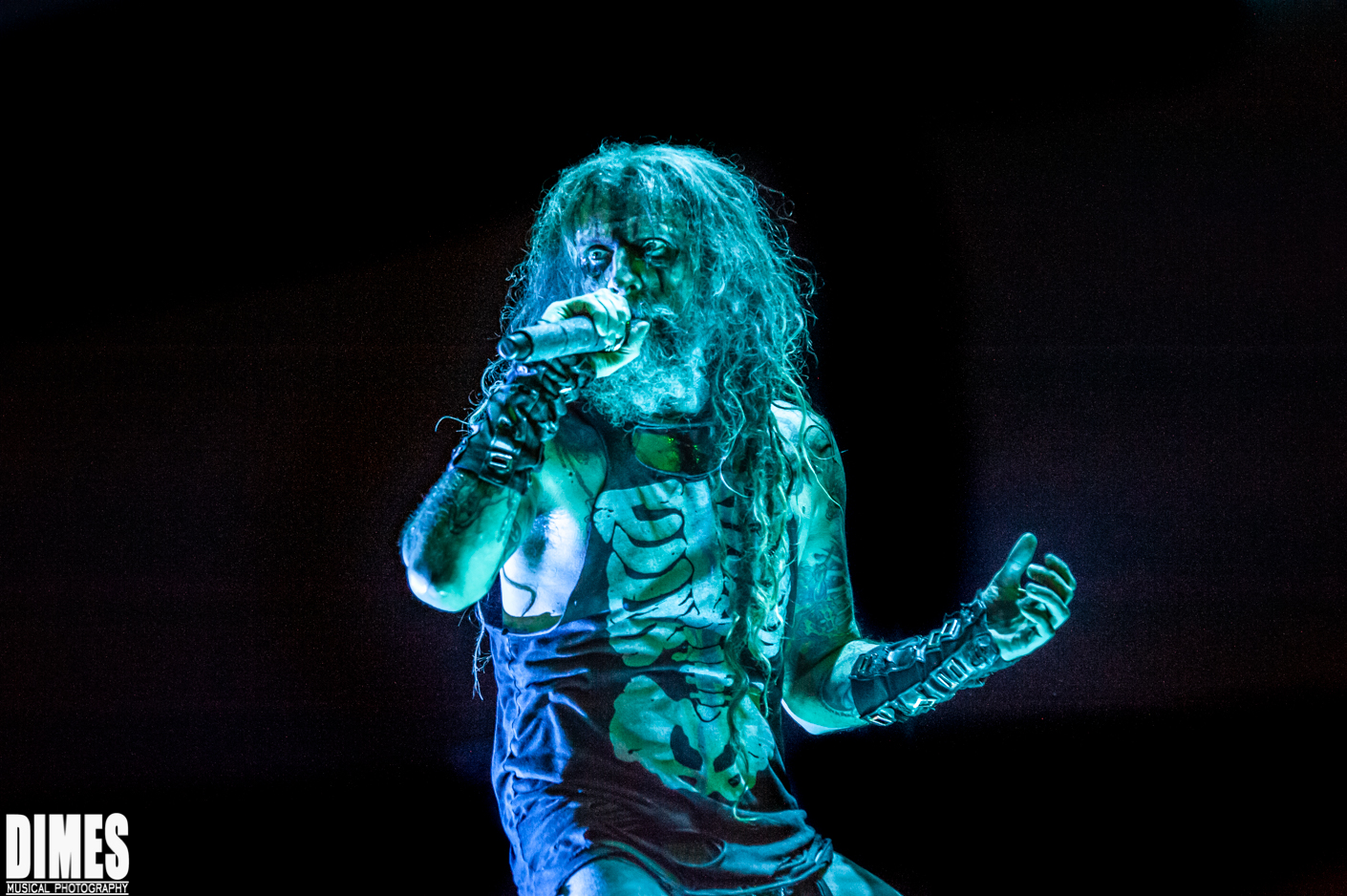 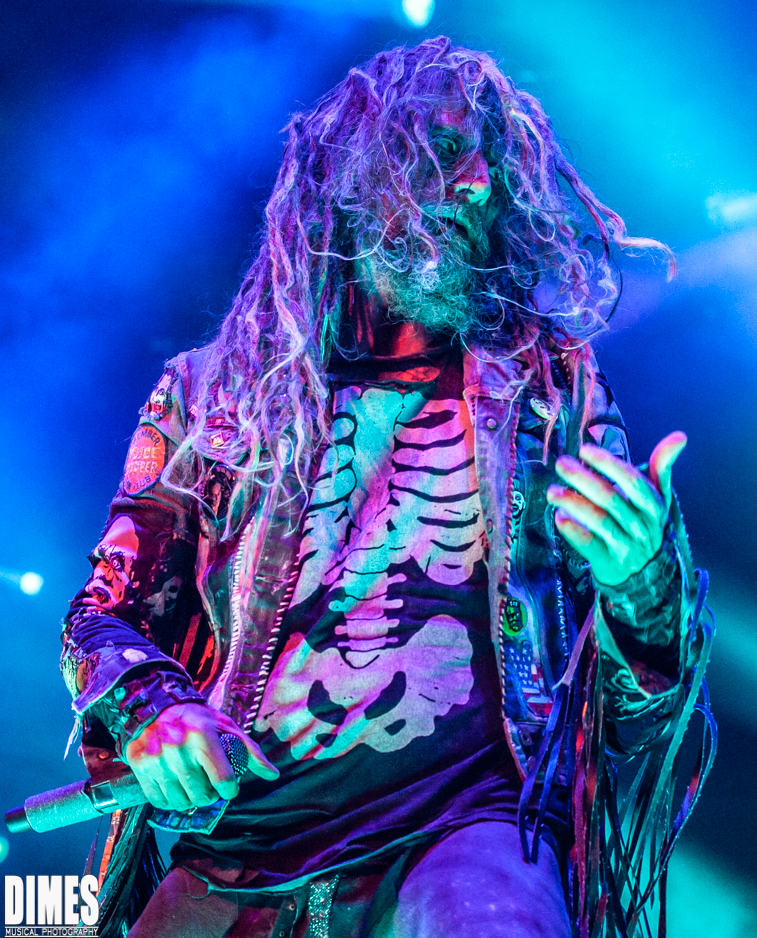