Eddie Van Halen has Died at 65 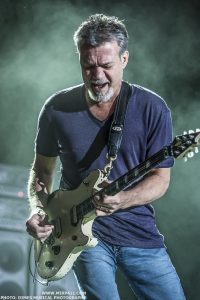 From the camp at Les Paul to Nikki Sixx, Sebastian Bach, Billy Idol, Flea, Jimmy Kimmel, past and current members of Kiss, Tony Iomi, just to name a few, tributes from around the world poured in today at the news of Eddie Van Halen’s death.

News was confirmed by Eddie’s son, Wolfgang, in an honest and heartfelt post:

“I can’t believe I’m having to write this, but my father, Edward Lodewijk Van Halen, has lost his long and arduous battle with cancer this morning. He was the best father I could ever ask for. Every moment I’ve shared with him on and off stage was a gift” and “My heart is broken and I don’t think I’ll ever fully recover from this loss. I love you so much, Pop.”

But perhaps the most heart wrenching was from his former wife, Valerie Bertinelli who wrote: 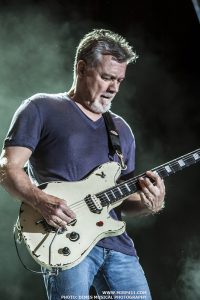 “40 years ago, my life changed forever when I met you,” she wrote. “You gave me the one true light in my life, our son, Wolfgang. Through all your challenging treatments for lung cancer, you kept your gorgeous spirit and that impish grin. I’m so grateful Wolfie and I were able to hold you in your last moments. I will see you in our next life my love.”

All accounts report Eddie succumbed to throat cancer.  He had battled tongue cancer from 2000 to 2002, coming out of that triumphant.  Bertinelli’s post above also mentions lung cancer.  Regardless of the how and why…the fact is that we lost one of the most influential guitarists of our time. 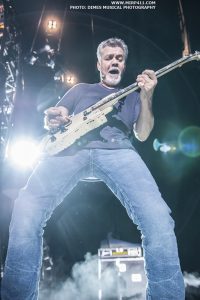 I remember when I first heard Van Halen’s Van Halen.  It was “Jamie’s Cryin.”  My friend had a crush on a boy here in town named Jamie, and she played it over and over.  My personal favorite song on that album is “Atomic Punk,” but there are so many classics.  That freshman album is chalked full of songs that we all love: “Runnin’ with the Devil,” “Eruption,” (the song that changed EVERYTHING guitar wise), “You Really Got Me,” “Aint Talkin bout Love,” “Little Dreamer,” and “Ice Cream Man,” plus the two I mentioned earlier and a couple of lesser known songs.

Van Halen II gave us “Dance the Night Away,” “Somebody Get Me a Doctor,” and “Bottoms Up!”

Women and Children First with “And the Cradle with Rock,” “Everybody Wants Some,” and “Take Your Whiskey Home.” 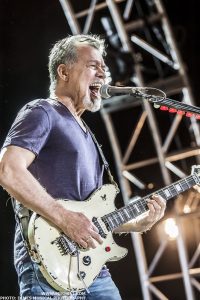 Fair Warning with “Mean Street,” and the uber popular “Unchained,” “Dirty Movies,” “Push Comes to Shove” (which is my favorite on this release) and “Fair Warning.”

Diver Down with “Where Have all the Good Times Gone,” “Dancin in the Street,” “Pretty Woman,” my personal favorite “Little Guitars,” and the ridiculous “Happy Trails.”

5150, their first with Sammy Hagar and their first of three tongue in cheek titles.  (5150 is reference to is a California law enforcement term for a mentally disturbed person.) It includes massive hits such as “Why Can’t This Be Love,” and a personal favorite song… “Love Walks In.”

For Unlawful Carnal Knowledge (or F.U.C.K.) if you didn’t know…with the incredible “Right Now.”

Balance with the monster hit “Can’t Stop Lovin You.”

Van Halen III with an attempt at success with Extreme’s vocalist Gary Cherone, which is really pretty, but yielded few hits.

And finally, A Different Kind of Truth, their last studio album, which I thought was horrible, and brought back the very dramatic and insatiably weird David Lee Roth.

Eddie changed rock and metal guitar playing and inspired nearly every guitarist after 1978.  Pair that with songs that became the soundtrack to our love life, partying, heartbreak, and challenges, and I’m not sure there is another who has touched so many in so many ways.

When I look through the catalogue of songs that Eddie Van Halen gave us, there is no doubt that his contribution to the world is larger than most.  Sixty-five is too young to die, but perhaps the beauty he provided gave him a first-class ticket to a more peaceful place.

Our hearts and thoughts go out to Eddie’s son Wolfgang, his brother Alex, his bandmates, family, friends, and fans.