This album could not have come out at a better time for me personally.  The first time I listened to it all the way through, I had just finished a difficult day at work at my day job. I was feeling useless, like I wanted to throw in the towel, and just go to bed. Putting this album on put a smile on my face.  I laughed at some of the lyrics, and the vocal range of Justin Hawkins made me feel warm inside.

The Darkness is one of those rock bands that you cannot ignore. The band is made up of brothers Justin and Dan Hawkins (Justin does lead vocals and guitar, Dan does rhythm guitar and backing vocals), Frankie Poullain on bass, and Rufus Tiger Taylor on drums. Their musical talent, flamboyant style, variety of musical styles, and the fun they exude makes The Darkness in a league all of their own.

Personally, I have not seen them live in concert, but the mental images that come to mind while listening gives me the confidence that a live show would not disappoint.

Below I dive into their latest album “Easter Is Cancelled.” 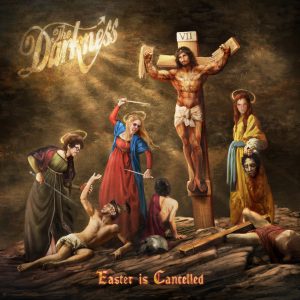 Kicking off this album is a track titled “Rock and Roll Deserves to Die.” The song starts off a bit slow with a beautiful acoustic guitar and Justin’s angelic voice. The chorus begins with “Rock and roll, your time has finally come, I am afraid you must die,” and on that last word…Justin reveals his fine-tuned, high-pitched, on point scream. The combination of Justin’s voice and the amazing electric guitar produces a song that truly rocks (even if it is talking about how it’s time for rock to die.)

“Live ’til I Die” is lyrically poetic.  It’s a song about wanting to be true to yourself. The song gives you the sense of the troubles or tough road that generally happens during the process of discovering yourself. “Live ’til I Die / Laugh ’til I Cry” on certain days, that can definitely be a personal anthem. Just as you begin to feel bit of depression, the drums kick in for “Heart Explodes.” This is the break up song on the album. The drums beat to a rhythm that made me think of running, and Justin’s voice singing lyrics that tells a story of a moment when you hurt so bad from a loss of love that you just “gotta” run. “Free to love again / Like the love you never showed / Free to love again / Love ’til our hearts explode.”

When I first heard “Deck Chair,” I was making dinner. This song feels like it should be played in an underground French bar in a dirty part of town, the smell of cigarette smoke, and the only light visible is a spot light on a stage where this song is being featured. The passion in this song is truly amazing.  The lyrics guide us through the story of a man, a man has lost his chair to the sea. I found myself taking a moment from making dinner to just imagine the predicament this man is in. I could feel the pain he was having, especially during the emotional guitar solo. I had added salt with the tears running down my face into the soup I was cooking. (Not really but could have.)

My absolute favorite song on this album is “Heavy Metal Lover.” It has the perfect dichotomy of a happy love song and a heavy metal song. The men of The Darkness know what they are talking about referencing heavy metal icons like Obituary, Meshuggah, and Cannibal Corpse. 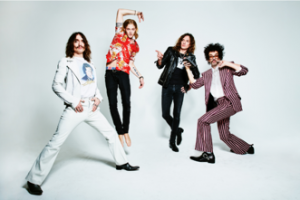 My other favorite on this release is “Choke On It,” which has a bit of a punk feel to it. Definitely the ‘fuck you’ song on the album…whatever you want to say ‘fuck you’ to, it will aide you in your plight.  Fuck heart ache, fuck users, take whatever…but just choke on it.

Thank you to The Darkness for writing an album that takes us on a journey…a journey that we can all share.

Hats off to you on this release.  Here’s to continuing to make music that breaks boundaries.