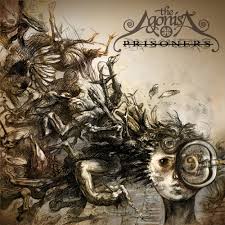 This Canadian female-fronted metal band is composed of members: Alissa White-Gluz on vocals, Danny Marino and Pascal “Paco” Jobin on guitar, Chris Kells on bass, and Simon McKay on drums. The Agonist has toured with bands such as: Chelsea Grin, God Forbid, Epica, and Alestorm. I first saw them when they opened up for Kittie here in Portland, Oregon, at the Hawthorne Theater. The very first thing you notice when you see them live, is the beauty and amazing vocal range of Alissa. She could ultimate goal with their music:  to get their audience to think for themselves. They have songs that bring to light some very controversial topics such as animal testing, drug abuse, environmental protection, and eating disorders, just to name a few.  Their controversial risks persuaded me to take another listen to their third studio album with Century Media, “Prisoners.”

The Agonist did not scrimp on heavy and fast on this one. Prisoners is more cohesive, and more progressive than previous releases. My favorite songs on this album are:  “Panophobia,” and “Everybody Wants You (Dead).” Both songs provided the right amount of heaviness to get me amped and excited. “Panophobia” would be a great first song to play live – it would no doubt get the crowd jumping and in the pit! “Everybody Wants You (Dead)” is the perfect FU song! The first single off this album, “Ideomotor,” shows the brilliant composition that The Agonist have created, dependent heavily on the strong singing/ screaming style of Alissa, the heavy bass and drums, and the amazing outro that stunned me!. After hearing this song, I remember why I love this band. The other songs I’d definitely recommend checking out are: “Dead Ocean,” and “Predator & Prayer.”

This album is a must have, and proves that a female-fronted metal band can kick ass. Other than the French speaking intro on the last song (because if you know me, you know I do not enjoy the French language, but it’s ok they are from Canada!) I loved this album. –SS11