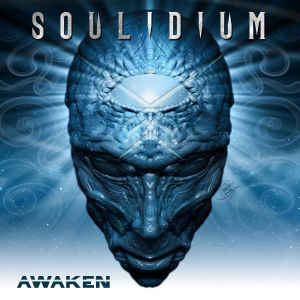 Soulidium is a Miami originated band that began in 2006 and just produced its second album, Awaken, which has an epic and theatrical, almost magnificent Rock feel to it, its layered textures, excellent musicianship and incredibly polished production are evident through all tracks here. They garnered attention with their debut album Children of Chaos a few years ago and went on to tour successfully with artists like Sevendust, Alter Bridge, and Puddle of Mudd while delivering memorable live performances.

The music has a rich tone, both in musical dynamics and in the production, where you can tell attention was paid to every detail of each song. Nothing was missed here.  Instrumentally It’s both heavy and radio friendly at the same time, genre-crossing in a time where the subgenre issue has become so muddied that its perfectly okay to just be ROCK again. This band has all the heaviness of its predecessors without feeling dated in its appeal. Melodic and edgy it has hooks for days and this is especially apparent in opening track “Calling” and one of my favorites the grooving and contagious “Fields of Fire.”

The slower burning “Fly 2 The Sun,” which features vocal pairing with Lajon Witherpoon from Sevendust and “The Devils on His Way” which really showcase McKnight’s vocal abilities with a diverse and harmonic range that stays in control while still wandering on a deliberate journey that will take you crashing along with him. Lyrically this song is incredibly strong as is “Sacrificing You” which is punctuated with angst yet still low end and melodically driven.

The second half of the album leaves plenty of room for repeated listening with songs like the heavier but chorus driven “Taking Over,” and another of my favorites “Son Of Anarchy” which seemed fitting, a change in the dynamics and over all feel – they stretched their wings a bit here musically, instrumentally and lyrically. There’s a faster, guitar driven version of Pink Floyd’s “Run Like Hell,” but being an old school Pink Floyd fan it took me a few listens for their faster tempoed version to kick in for me. It’s an interesting take on an amazing song. I think it’s a good idea for bands to put their stamp on a song when honoring a cover rather than copying the original. The last stretch of the CD is full of songs that could be considered singles, like “Betrayed” which I could see getting radio rotation, and I really enjoyed “Reluctant Goodbye.” They drive into the intro acoustic arena with “Shattered Man” and the last track is appropriately titled “The End.”

Overall I think this is an excellent effort.  I could make obvious comparisons here but I won’t because this band isn’t a copycat, it is just reminiscent of a sound of music that inspired a lot of new bands. They manage to retain this without sounding like anyone but themselves which is difficult in today’s musical landscape. While I admit to having never heard of this independent outfit before, I have to say I’m a new fan and would take the time to see them if they play near me, and keep an eye on any new albums of the future.