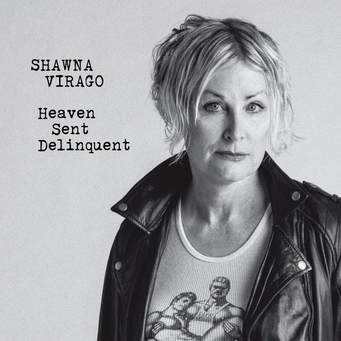 Ten tracks of very simplistic guitar work juxtaposed with ten tracks of true-life vocals, “Heaven Sent Delinquent” is an album that will resonate with some.  I applaud Shawna for releasing obviously what she had to get out of her being.  I applaud her for throwing art into the universe.  I applaud Shawna for keeping true to her dreams and making music that she likes.  That being said, “Heaven Sent Delinquent” is mediocre at best.  Without the small quantity of excitement via harmonica in “Burnout,” and the interesting guitarwork in “Land of Guns and Honey,” the release borders on monotonous and obvious.

​An album that will not be “everyone’s cup of tea,” “Heaven Sent Delinquent” is an emotional release that will be there when and if you need it.  When your experiences mimic Virago’s in any manner, it might be your best friend.  It may be the one thing that reminds you that you are not alone.

Virago’s guitar style is folk-punk with an “I recently picked up the guitar” feel to it.  Her lyrics touch on day to day happenings in life and love, and the struggles that can come with being transgender.

Shawna’s voice waivers from Courtney Love to Alice Cooper to Bob Dillan, culminating into a voice that is uniquely hers.  For the most part, the vocal patterns in this release are obvious, and vary little within a song. Upon first listen, you can generally tell where the music and vocals are going before they arrive.

​“These are the stories of my generation – a generation of transgender people who came out long before the internet, before transgender celebrities and reality TV stars … before anybody gave a shit about us.” – opined Virago.
Stand out tracks are: “Bright Green Ideas,” where Virago sings in the style of Courtney Love circa “Doll Parts.” The classic blues riffs solidify the simplistic feel of the song.  There is an uncomfortable series of notes at 2:14, which is likely intentional.  I doubt Virago intended this album to be comfortable.

“The Ballad of Miss Suzy Texas” is a catchy song that is more complex and has a brighter overall feel.

“Anniversary Song” is the best song on the album.  Through repetition, it becomes catchy.

​“Burnout” features harmonica parts which add considerably to the song.  Again, her choice for uncomfortable notes are present causing a bit of discomfort.

Throughout the album, you get the feel that Virago has seen and felt a lot in her life and always comes out on top.  Through her choices in both composition and recording, she captured those feelings in a raw manner that is best described as:  someone captured her 10-song performance at open mic night on a good night.  The feeling of rawness and simplicity runs through the entire album like a swift underground river.

If this album doesn’t catapult Virago to stardom, likely one of her other many talents will.

·        The Advocate named Virago’s song Objectified as one of the nation’s top transgender anthems.

·        She is a published writer and her work appears in Gender Outlaws: Next Generation and in the anthologies Trans/Love: Radical Sex, Love & Relationships Beyond the Gender Binary and Take Me There.

·        She has been featured in documentary works on PBS and NPR.

Stream and share the full album via Soundcloud: https://soundcloud.com/shawnavirago/sets/heaven-sent-delinquent-full