Separation of Sanity – The Crucible 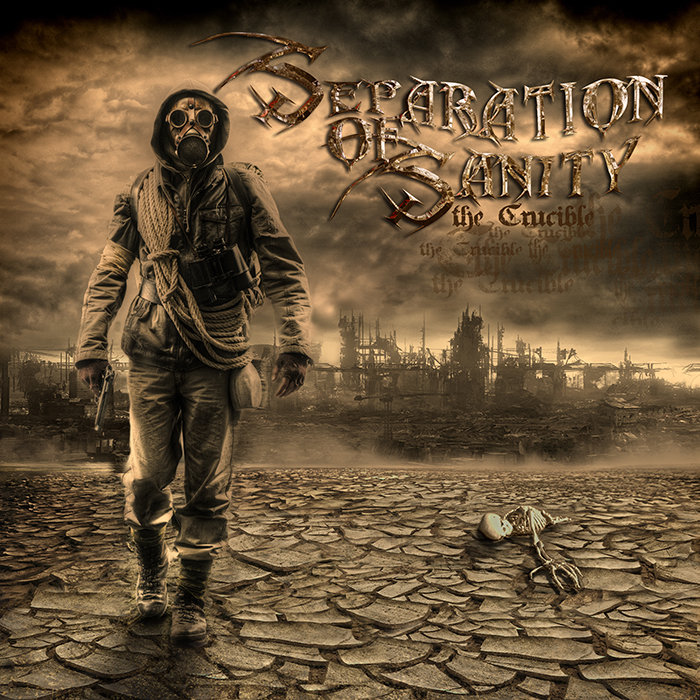 Separation of Sanity​ release their long gestating album – does it live up to the hype? The answer is yes, and then some, largely due to the strength of their song writing and lush production. The album starts off with the​ brooding escalation of​ “End of Days” a​ two-
minute musical intro which sets the tone and pace for the album. As “End of Days” crescendos into “Pandemic” you get your first taste of the greatness that this release has to offer​
.
“Pandemic” has it all, killer riffing, drumming that catapults the song forward, and a great “LEGION” chant that makes the song a staple of their live sets.  Frontman Jason Carpenter sounds as pissed off as one can be and still sound musical.  His vocal delivery over flawless music execution helps make this release memorable.  This song stomps, the only time it slows down its do add some dynamics before it just take off and steamrolls again.  Yeah, we’re all legion​!​

“Armed” is up next and you get a taste of the great production on the album along with another great song.  Killer riffs, great lyrics, another catchy chant, and hooky grooves and guitar effected riffs help make this mid-tempo song strong.  Two for two on the great song count.  Next up is “Greed” and this is where the band starts spreading it wings into a slightly more melodic territory right off the bat.  Melodic riffing and great drumming build up to one vocal and bass hook after another.  Bassist Ivar Forkbeard comes in with a great chorus hook that’ll stick in your head for days.  The interplay between Ivar and Jason is classic and helps keep the song driving forward.  There’s also a great melodic solo at the 1:50 section that lasts for about 30 seconds and shows off the bands chops.

“Pain” is a musical interlude that builds up to the next song, “Grinder”.  I think I would have ditched the interlude and just kept the train on rolling as Grinder is another high energy tune and that break in between seems forced.  But that’s damn near my only gripe on this entire release. “​Grinder”​ is another song that starts with the thunder and then morphs into an epic chorus sung beautifully by Ivar, and then transitions seamlessly into a great breakdown.

Skipping forward to “Flesh and Bone” we hit a song that starts off near ballad-ish, but has that dark undercurrent throughout.  The bass and drumming keep it grinding along as the guitars build up to the explosive riffing we expect at 1:24.  Just when you think you have the song figured out and you would expect vocals to kick in, there’s another musical break which show off Keith and Randy’s guitar skills.  These guys are tight and play off each other effortlessly. Sebastian Phoenix provides guest vocals here and shines bright.  He and Jason provide a great dynamic and are a pleasure to listen to their interplay.  The vocal build up at the end of the song is beautiful and will make you want to hit replay multiple times.
​
This is a great album and one of the stronger releases from a Portland band in some time.  It’s a fully realized album, not just a collection of songs.  Snag it. Spread the word.
​ ​

​*Editors Note:  There is a bonus track at the end worth mention. All of it’s good, but at the end SOS covers Prongs infamous “Snap Your Fingers, Snap Your Neck” in an aggressive all out frontal assault they pay homage to the legends while adding their own unique spin. Totally Dig it! Amazing song, amazing cover. Good call boys!  -RS