First, just let me say that seeing Ligature Marks live is always a pleasure.  But seeing Gojira and Ligature Marks…well, it was a fantastic evening for sure.

Gojira, hitting Portland on a one-off show the day before Seattle’s Pain In The Grass, was truly unbelievable.  I’d seen them many times before (and they are one of my all-time favorite bands), but on this night there was something special in the air…I’ll go so far to say that the night was magical.

I left my day job early, drove fast to downtown Portland, changed in the car (Killswitch Engage or Sunflower Dead shirts were the options in my trunk)…so KSE it was.  I parked quickly and ran to the venue, as I was sure there would be a line wrapped around the building.  It was 4:00 PM and the doors were at 7:00 PM.  I was fifth in line.  It was hot, and I quickly made friends with those around me.  In front of me were a couple from Colorado, both donning Gojira shirts, and to the other side of me was a couple from Eugene.  Everyone was talking about Gojira.

Generally, when you go to a metal show, you wear a black band shirt, but generally not of the band you are seeing.  You choose carefully within the genre, but generally not the actual band.  Not on this night.  I’d say 50% or more of the people waiting in line were already wearing Gojira merch.

Besides Gojira knowledge and past Gojira experiences, the hum was about Ligature Marks:  “Who are they?” “How did they get this coveted spot?” “I checked them out and they are good.” “Their website has videos and everything.”  “I’m looking forward to hearing them.”  As the chatter reached me, I was proud to call them my friends, and told everyone around me everything I knew about them.  As I was taking there was a tap on the window behind me.  It was Ligature Marks Singer Benjamin Charles, mouthing and gesturing with his hands, “I heart you.”  That solidified my pedigree, and I was now the Ligature Marks expert.

We killed time watching the homeless people and the freshly off work business people unite on the streets.  Promptly at 7:00 PM the doors opened.  I raced to will-call got my stamp… ran upstairs to my coveted seat (stage left, front row balcony.)  I draped my slipknot hoodie over the chair and sprinted back downstairs to the merch booth and bought up just about everything they had to offer.

Ligature Marks took the stage timely to a packed house, and made Portland proud.  Their polish, finesse, and talent equal veteran national bands that have played Portland’s Roseland Theater.  There is no doubt in my mind that Ligature Marks will continue to climb in popularity, not just locally, but as far as sound reaches.

The intermission was brutal.  The wait for our beloved Gojira felt like hours.  The standard System of A Down singalong was fun, as was the conversation.  8:00 PM promptly, Then the atmosphere dramatically changed, the smoke rolled in, and Gojira took the stage.

Gojira is special; they are more than a metal band.  From the tones produced from the guitars, to the off beats and time changes, they layout more th 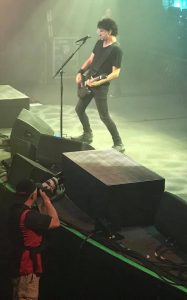 an a metal show.  I’d go so far to say it’s even spiritual.  It was one of those few and far between moments when the artist and the audience fully connect, intertwined by the universal sound that everyone understands.  Joe even said mid-way, “Put your cameras down…you aren’t even going to watch the footage…engage with us, feel this magic together,” – that might not be exactly word for word what he said, but the sentiment is spot on.  And people did put their cameras down.

Each member of Gojira has a special talent, but Joe is the superstar.  Sometimes he moves like a teenager jamming in the basement, and sometimes he looks like a sophisticated, polished rock star.  Flawless in delivery. both vocally and musically, this night was the best version of Gojira I’d ever seen.

They played a long set, and knocked Meshuggah off the pedestal in my mind of the best live show Portland has seen in the last two years.

I feel sorry for the fans at Seattle’s Pain in the Grass; the rumor was they only played five or six songs.

That is a travesty.

On this night Gojira’s set-list included:

The Gift of Guilt