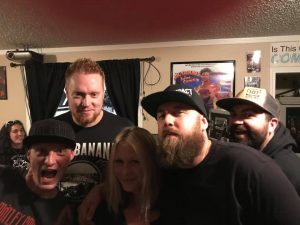 Ligature Marks.  One of the most anticipated bands to come out of Portland, Oregon in a long time.  While Kyle, Karl, Ben, Dave, and Josh aren’t new to the scene by any stretch of the imagination, the band they have put together is.  I recently saw their first live performance when they opened for Insomnium, and I can say that the buzz throughout the venue was more about them than the headliner.  The talent in this band, is impressive.  They’ve managed to put together a band that provides something new in a sea of common; their songs are smart, well written, excellently produced, and HEAVY.

Not only are they excellent musicians and songwriters, but they are also a well-rounded business machine.  Not only are they obviously brothers (which you’ll clearly see in the recent interview) but each member provides a pivotal role in the actual running of the machine that is Ligature Marks.  Notably, one member had the vision to put on a listening party at OMSI (Oregon Museum of Science and Industry) and program the light show to their music (you know…like Laser Floyd back in the 80s). If that fancy feature wasn’t enough, they arranged for an open bar with top notch beer, cider an alcohol.  It was a great success, as is their debut release.

They could be pretentious and unreachable with their metal pedigree, but they aren’t in the slightest.  You can find any one of them supporting the scene at any given time.  This band does not ride on the coattails of their other successful projects (36 Crazyfists and Vintersea, to name a few), rather, they fly solely on their talent and passion for music.

Ligature Marks is one of those special bands that assembles every once in a while.  They are intriguing, genuine, honest, funny, talented, and I have no doubt will go all the way.

Check out my recent interview with the band: