Damage Overdose is one of those bands that you like immediately.  While their playing is complex, the primal beat provides easy access to be part of the audience.  Even if you aren’t familiar, they are enjoyable.  But really, who isn’t familiar with these metal musicians?

From Warm Springs, Oregon, this native band, and their special Rez Metal sound, they invoke a unity in all who attend their live shows.  They’ve been around since 1997 and have five releases.

I saw them play at Riverafest (an amazing gathering of Oregon/California metal fans in what can only be described as an organic and rare event).  They obviously took advantage of the time not touring to write some really heavy songs.

I had the pleasure of sitting down with Chuck, founder, guitar player, and vocalist of Damage Overdose recently. 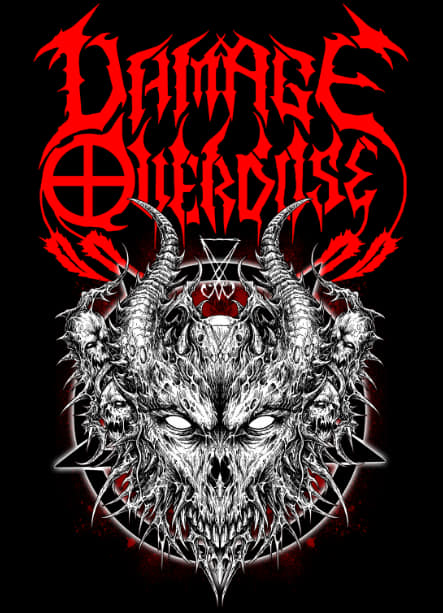 MIRP:  Was Riverafest the first show for you post-pandemic?

Chuck: It was the second show for DOD post.  We played May 1, in Kelso WA at the Erebus

MIRP:  Had you been to Riverafest before, and if yes, how many times?

MIRP: If it was your birthday and you could have any five bands play your party, who would they be?

MIRP: Did the time between the last show pre-covid and your first show in 2021 cause more nervousness or more excitement?

Chuck: More excitement because we took the time off to practice for shows.

MIRP:  Wrote quite a few new songs…how did the pandemic impact that?

Chuck: The pandemic really didn’t affect the writing, we usually write about this stuff.

MIRP: Was there ever a time you thought perhaps there wouldn’t be a future for DOD due to the pandemic?

Chuck: I thought the pandemic would make us stronger, which it has, with our new bass player we have been in writing mode.

MIRP: Was there ever a time you stopped playing guitar during the pandemic, or did you practice even harder?

Chuck: No, it made me play guitar more at least every day, which should be practiced daily if have the opportunity

MIRP: Did you pick up any new hobbies during the pandemic?

Chuck: I haven’t picked up any hobbies, just did my usual regime.

MIRP: Rez Metal, or all Native bands like Damage Overdose, do you find a commodore with other Rez bands such as Warpath or Hemlock or is there a competition…even a healthy one?

Chuck: It’s more a commodore or brotherhood, we support each other because it’s such a minimal culture of bands but grows stronger

MIRP: What is the status of new recordings/releases?

Chuck:  We are in talks of maybe recording or going into the studio in fall of 2021

MIRP: What is the subject matter of the new material?

MIRP: Tell me about the Liquid Metal on Sirius XM experience?

Chuck: Liquid metal was cool to be on especially on the native hour on Sundays, we have been on it many years ago but was honor to be on it again along with our other native brother’s bands, more exposure over satellite is always good.

MIRP: You have a new guitar player…how did he come to be in Damage Overdose?

Chuck: We have had a new member, Robert Johnson, since November of 2019, he played in MRSA and Victims of Eternal Decay, we have known him for a while doing shows and the scene.

MIRP: What are some of the releases for 2021 so far that you are enjoying?

MIRP: What are your hopes for the remainder of 2021?

MIRP: Where can people check out or purchase DOD merchandise and music?

As always, it’s been a pleasure.  It was so nice to see you at Riverafest!  I’m looking forward to your next release and show!