I love Corrosion of Conformity.  I love Crowbar.  Both bands got me through some rough patches in my life and I will forever love them.  To this day I can only listen to America’s Volume Dealer and Odd fellows Rest in their entirety.  I’ll pull over in a parking lot to let them finish once started.  I was thrilled to see these to amazing bands together in this small and intimate venue.

Ok, now for the openers in the style of Cliff Notes:  North Carolina’s Weedeater I hated and Texas’s Mothership was just OK.

The show was sold out.  I got to the front thanks to my friend Terry.  I wasn’t sure what to expect with Mothership, but was quickly blown away by their confidence and style.  A little Motorhead, a little Nashville Pussy, they were good, and they knew it.

Up next was Weedeater.  I heard quite a buzz in the audience: “They are awesome.”  “They are horrible.”  I started out open minded and was enjoying the show until bassist Dixie Dave Collins let a long thick snot blog drip out of his nose.  That was horrific. What came next doesn’t even have a word…he stuck his tongue out to catch it and then slurped it up with his mouth and back into his nose.  I gagged…for like 5 minutes.  As a matter of fact, I’m gagging as I recall it.  His antics were entertaining, and but for the snot, I may have possibly enjoyed it. 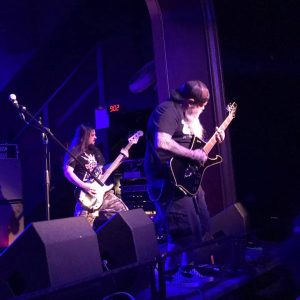 I had my friend hold my spot and I raced over to the merch booth to get a new COC shirt and a Crowbar beanie.  Back in time for Kirk and his band to take the stage.  Few front men achieve the respect that once was reserved for the likes of Phil Anselmo, but fellow New Orleans guitarist/vocalist Kirk Windstein definitely has it.  You could see both men and women gaze at him with admiration, and he soaked it up without the feeling of arrogance.  His small stature transforms into a giant the moment he hits that first chord and belts out that first word.  It always feels like Kirk is a long time friend and he seems to embrace that sentiment when he comes to town.  Playing songs that spanned their nearly 30-year career, they were flawless and fun.

Pepper Keenan and his bandmates stole the show.  I’m a huge fan of Deliverance, Wiseblood, Animosity, and America’s Volume Dealer, and was thrilled that they played many songs off of those releases, in addition to supporting their newest release “No Cross No Crown.”  I had the privilege of interviewing Pepper in Down a few years back and have always admired him for being a pure, genuine 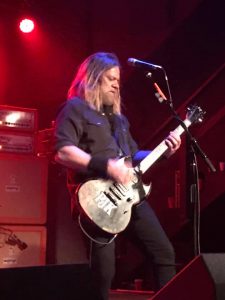 e, no nonsense musician who generates a sound, both with his voice and guitar, that is undeniably his.   They played:

Bluesy and melodic, energetic and loud, Pepper performs with a sexiness that is rarely seen.  Corrosion of Conformity continue to produce relevant releases and they look like they love those older, beloved songs just as much as we do.