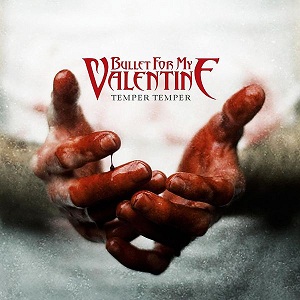 Bullet for My Valentine (originally named Jeff Killed John) is from Wales, and was formed in 1998.  It consists of members Matthew Tuck (lead vocals and lead guitar), Michael Paget (lead guitar and backing vocals), Jason James (bass guitar), and Michael Thomas (drums.)  Their debut album “The Poison,” was released in 2005. Bullet for My Valentine has toured with Metallica, Bleeding Through, Black Tide, Killswitch Engage, and Marilyn Manson, to name a few. “Temper Temper” is the band’s fourth studio album. Since I am a fan of their albums “Poison” and “Scream Aim Fire,” I decided to check out “Temper Temper” to see how it stacked up. “Temper Temper” is a classic Bullet for My Valentine album.  It has some kick-ass fast paced songs, and some heavy ballads in the mix. The songs that stood out to me the most were:  “Riot,” “Breaking Point,” and “Tears Don’t Fall (Part 2).” The song that starts the album sets the bar very high, which unfortunately some songs on the album never reach. “Breaking Point” would be my choice to open a live show.  It will no doubt get the crowd going. “Riot” is a classic Bullet for My Valentine song with classic guitar riffs, and clean singing that leads into screaming vocals.  There are more ‘ballads’ on this album than I would have liked, but my favorite one is, “Tears Don’t Fall (Part 2).”  It has just the right elements – the whisper, a lyrical buildup to the guitar solo – it is a timeless Bullet for My Valentine ballad.

Bullet for My Valentine collaborated with Chris Jericho from Fozzy on the song, “Dead To The World” which is another ballad that has strong lyrics that evoke sadness. Of course, no album would be complete without a ‘FU’ song, which in this case is “Leech.”  The deluxe edition of “Temper Temper” comes with a few live songs and an AC/DC cover song “Whole Lotta Rosie.”

So, while I feel that “Temper Temper” is not Bullet for My Valentine’s strongest album; I do think there are enough classic-BFMV songs on this release, that will keep them a relevant band. – SS11