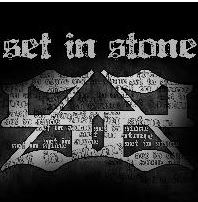 Set in Stone is a Pacific Northwest hard rock band that was formed in 2008 in St. Helens, Oregon (a suburb of Portland, Oregon) and consists of five band members that have all resided in Columbia County for most of their lives. Their unique heavy-rock sound has been referred to as the likes of Seether, Breaking Benjamin, and Alter Bridge. Set in Stone offers a wide-range of styles and musical diversity, which is the foundation of their unmistakably unique and all-original sound. Their deep guitar crunches, solid riffs, ground-pounding bass, heavy-handed rhythmic drums, and mesmerizing vocals are all reasons Set in Stone has quickly attracted the attention from all over the Pacific Northwest.

Set in Stone released their first self-titled album in April 2009. Their first professional album ‘Open Doors’ debuted in May 2011. The album consists of 11 professionally recorded, mixed and mastered tracks recorded by Black Diamond Studios in Portland. This album can be streamed or downloaded for free on our ReverbNation website: www.reverbnation.com/setinstonerocks.

In 2017, they released their second professionally recorded album “What Remains.” Also recorded, mixed and mastered by Matt Jefferson of Black Diamond Studios. Both albums can be found on most widely-used music platforms.

Set In Stone (AJ): We have a lot of energy. We get on stage and give everything we’ve got and even though we don’t have a gimmick or something like that, we make an impression on people.

Set In Stone (WB): We would probably say Apophis Theory. Those guys get down

Set In Stone (WB): We don’t think we will do anything different. We are going to be running the streets and social media promoting this show just like any other. We just want to play music for people and hope that they can relate.

Set In Stone (AJ): Make it 100K!!!! Haha seriously though it would be a dream come true. The most we have played for is 3500. This would be a day I would never forget.

Set In Stone (AJ): I would say when I went to my first concert, which was Rockfest 2004, I saw Chevelle, Trapt, Korn, and Disturbed. Just watching those guys on stage and seeing how thousands of people connected and interacted with each other just triggered something inside of me. At that moment I was like, “Yeah. That’s what I want to do with my life.”

Set In Stone (WB): To get enough recognition for us to do what we love for a living.