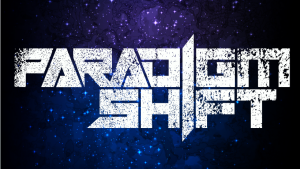 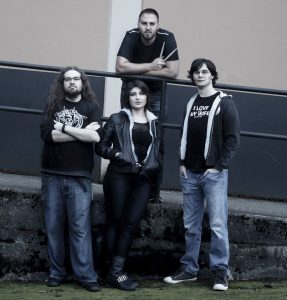 Paradigm Shift (Chris): I’ve been playing music for the majority of my life.  I’ve never played for a crowd on the scale of Wacken. To be able to play our music for so many people and see the crowd vibing with what we do would be a very special thing.  I can’t think of a more fulfilling payoff for a musician.

Paradigm Shift (Fern): As Chris said, I haven’t ever performed at a venue or festival as large as Wacken and think it would be incredible to have an opportunity like that. The more I see of the metal scene, the more I want to play in front of those crowds!

Paradigm Shift (Chris):  I think what sets us apart is a seamless blending of styles.  Our members come from a diverse set of musical backgrounds. The meshing of classic metal with progressive and pop influences really resonates with people in a new way.

Paradigm Shift (Chris): I’m most worried about our friends in Pitch Black Mass.  We’ve played a bunch of shows with them and they bring it every time.  Their music is good and their stage presence is awesome. I’m a fan of theirs – so I want to root for them as well (but not too hard).

Paradigm Shift (Fern): I also think, though we really are different, they were one of the first local Oregon bands that we played with that we really meshed well with and felt there was a similarity in the music. I found Jonathan’s stage presence and comfort very inspiring.

Paradigm Shift (Chris): Honestly, I try to play my heart out and conduct myself with professionalism at every gig – so I’m not going to change much.  I might have to contend with the extra nerves a big prize will bring, but that’s about it.

Paradigm Shift (Fern): I’ve been going back and forth with this and what I can say is, I’m only as good as my last show. As someone who has less experience being a “front-woman,” each show is a chance to be bolder and more interactive with the crowd.

Paradigm Shift (Chris): As a huge live music fan, I’ve been on the other side of the stage in these giant festivals.  I cannot imagine the feeling of playing my music for so many people! I get excited just thinking about it!

Paradigm Shift (Fern): I’ve always dreamed of playing in front of that many people. It makes me really nervous, but also excited. I think it is one of those feelings that can’t be explained until you’ve done it.

Paradigm Shift (Chris): Metallica.  I picked up the guitar to learn how to play One from And Justice for All.

Paradigm Shift (Fern): I can’t think of who that might be. My parents might have stories! I think as a singer I was inspired by lots of artists and genres throughout the years. But I think the band that made me want to be a rock musician was probably Evanescence.

Paradigm Shift (Chris): This is a tough one!  It would be pretty terrible to only listen to two bands all year!  I’ve been very into Jinjer recently, so I’ll add that to the list. I’d also pick a non-metal band in Thrice.  Their old stuff means a lot to me and their new stuff is excellent as well.

Paradigm Shift (Fern): Our bassist Galen introduced me to the band Karnivool, and I feel like they’ve been at the top of my list for the last year and I’m not tired of them yet! In addition, I think I could rock some of The Pretty Reckless for a year. Their style keeps evolving, so it’s like you get a little bit of everything in the rock/metal category from them.

Paradigm Shift (Chris): I really just want to share the music we’ve made with the world.  My dream is to get that music in front of as many people as possible.

Paradigm Shift (Fern): I would hope, as I always hope, that our music reaches people. That it resonates with them and that the lyrics mean something unique to them. I’ve done a lot of healing by listening to music and I would love to be able to do that for others.