It’s been on my mind all day.  This album is a cherished friend when I’m happy, when I’m sad, when I’m lonely; besides the fact that it is a perfect album, it is nearly perfect for any emotion I am feeling.

I wrote a review of the album on the day it came out, and had the privilege of interviewing Jake E. with Jesper in the room.  As I read the words I penned many months ago, I still feel the same.

Here is my review of Cyhra’s “Letters to Myself.” 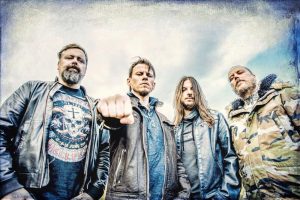 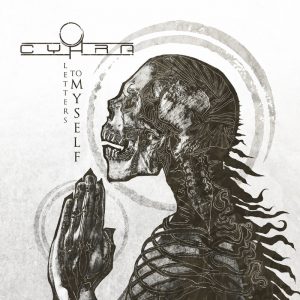 I should have had this album earlier, but due to many causes, there was a delay and I received it today…the day prior to its official release. As I listened from track one, when I got to “Letter to Myself,” I realized beneath the documents entitled “Cyhra Review,” and “Cyhra Interview,” on my computer, was a document entitled, “Letter to my Father.”  A letter that had been sitting on my computer waiting to be written to my father to try to rid me of my guilt for not being there when he passed four years ago. I realized that the letter to my father was really a letter to myself in an exercise to forgive myself. I realized I was writing a letter to myself while listening to “Letter to Myself,” on the eve of the anniversary of his passing. The delay in getting this album was not unintentional; I needed a soundtrack for the experience.

This is an album that you will listen to in its entirety. No song will outweigh the other. As you sing and feel every note and every lyric…you will feel great satisfaction. It will become the soundtrack to all things tragic and triumphant in your life. The solos communicate the emotion, the lyrics communicate the topic. Each song has everything, but is distinctly different from the last. You will not only hear the music and lyrics…you will feel them with every cell in your body.

Every song has a catchy chorus. Every song has a beautiful solo, and every solo communicates the emotion of the song. It is beautifully recorded, smartly composed, perfectly performed, and is simply a stunning release.
Jesper interjects emotion, (often beauty) in every song through his melodies and solos. Be it aggression, anger, hope, despair, love, sadness, victory, you will be clear on the intention. It’s unlike anything you’ve ever heard. It’s familiar, but new. It’s modern yet classic.

While a first release, and the men in Cyhra may have had something to prove to fans, an industry, and past bandmates, they need not prove anything anymore. This album is stellar, brilliant…and a shiny example of perfection by musicians who have written exactly what it is they were supposed to write. Clearly Jesper and Peter were in In Flames and Jake E. was in Amaranthe, but they won’t always be known for that; they will be known for this. With “Letters To Myself,” Cyhra have proved any and everything they may have thought they needed to prove.

Karma
The perfect opening song. It is In flames meets Amaranthe. As if to say, “Yeah, we know where we came from…but look where we are going. We will give you a little taste of what you expect, we know there will be a comparison…but just wait…just wait.”  Jesper’s alluring extended limb, his guitar, communicating beauty in a fast-paced, energetic song, capped off with a pounding aggressive chorus that is vocalized perfectly.

Heartrage
Its frantic pace communicates anxiety…with a sudden beautiful surprise of a chorus that cradles the condition. Subtle messages?  Perhaps, but you don’t care. “And so, I fell into oblivion, revenge is running in my mind.”  A song to prove something they don’t need to prove. “I know that I am my own worst enemy, I hold the future in my hands.”  This song is pure triumph.

Here to Save You
In the event you wondered…Jake E. can sing. His vocal range in this song is astonishing. Nothing is too much in this song. All instruments are properly heard evenly. “When there is nothing less to prove…I’m coming to get you.”  An amazing solo is followed by a beautifully held note. At 2:53 it’s one of the coolest breaks I’ve heard in a long time. The lyrics are brilliant. This song is a testament to Jake E’s vocal abilities. You are assaulted in the most beautiful way by Stromblad and caressed back to life by Lundberg.

Muted Life
This is a great solid song. “I’ll be the first in line to see a world go down in flames.” The accompaniment is well placed. The chorus is catchy as hell, and once again, if you weren’t paying attention to the lyrics, Stromblad will show you what’s up.

Closure
The heartbeat; the sirens….
A melody worthy of a solo at the start. Hauntingly sad, with pretty acoustic guitars. Where a verse could end, they add something extra…an extra bar or note that makes it unique. You think the song will go somewhere in particular, but they surprise you with the direction, yet it is easy to follow and familiar. There are well placed effects. “Getting ready to fight…we fight for our lives.”  When you think the note will go up…it may go down…. but you are happy it did, even though you initially thought the opposite. It has incredible flow and melody. “This is my last goodbye,” followed by a heartfelt solo. The guitars sound as if they are actually crying. Listen with headphones to this track to pick up everything that is going on. I felt incredible sorrow at this significant song.

Letter to Myself
By far my favorite track on this album.  I will be so bold to say it is the song I’ve waited my whole life to hear. The lyrics are applicable to any of life’s tragic lessons. “For a life I obsessed you now it’s time to forget you, and no matter how hard I try, cross you heart and swear you’ll try.”  The notes Jake E. hits make the hair stand up on my neck and arms. The chord choices and melody are dazzling. I must admit that I burst into tears when I heard: “I run, I crawl, please wait for me, I hold my breath just as I’m drowning…feels like I’m flying.” Stromblad provides one of the best solos I’ve heard to date. Cyhra is successful in making you feel the drowning and then the soaring flight.

Dark Clarity
Full of feeling and fast-paced, every member has moments of brilliance, however, Jesper and Jake E. are clearly the superstars. Iwers and Landenburg seem to hold steady, taking a step back to let Stromblad and Jake E. shine. The vocal pattern on the chorus is interesting, and the lyrics feel straight from someone’s personal experience. “It’s hard to face the fact you are on your own.”  Another heartfelt solo, crying out alone…communicating that clearly. The ending… is it victory or defeat?

Holding Your Breath
It’s electronic-heavy. It’s a song about love. Jake E’s high vocal range is highlighted here in an amazing way. “All I ever wanted was you to love me.”  Musically, it is a solid, straight forward rock song. Vocally, it is an impressive portfolio within one song.

Rescue Ride
It’s an interesting song with cool vocal patterns. It’s another great example of Jake E.’s capabilities. It’s the song that most resembles a pop song, with bursts of catchiness that will stick with you long after the song ends. As in the rest of the songs, the chorus is ridiculously catchy and the emotion communicated by Jesper is elegantly audible.

Black Wings
The lyrics will get you on this one. It’s about losing someone, relying on yourself, loving someone who isn’t good for you, knowing your own downfalls, picking yourself up, caring for someone…so many different options for applicability in your own life. There is a lot going on in this song under the surface. “When there is no one to blame, and you are left with shame and standing alone left to fight off my demons.”  Just after the sincere solo, at 3:04, the note bend seriously stabs you with emotion… you actually feel it.

Inside a Lullaby
The nuances in this song are plenty. “I hear you whisper in my ear, I’ll be here. So, this is why I cry when I’m asleep, I am fragile, I feel week, without you I feel hollow. I’m alive, I dream with open eyes, when darkness turns to why?”  It’s a very pretty and dramatic ballad. Everyone with any life experience has felt what this song communicates. The accompaniment communicates empathy as the story unfolds.

Dead to Me
The only strange song on the album, but somehow fitting both in placement and construction. It is a song that starts with commentary with acoustic accompaniment. It felt like Ice T should be a part of this song. It feels angry and throws you a memory of In Flames circa “Square Nothing.”  It seems to be a very honest song. Is it an apology?  There is an uncomfortable repetitive piano part that runs nearly throughout, but I think the song is supposed to make you uncomfortable. Its bold lyrics admit to being broken. Fragile. Alone. Then you are escorted to the sweet, Spanish-style portion of the song, but you don’t stay long…you are delivered square into an amazing rock song. The commentary appears again. The song is comprised of very distinct parts that you’d think wouldn’t fit, but do.

The album ends with: “You are all dead to me.”

As if Amaranthe and In Flames were stepping stones to what they were meant to do. “Letters To Myself” is a masterpiece.