AT RADIO WITH “KILLING ME SLOWLY ” 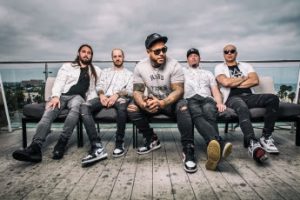 New York, NY – January 28, 2020: Global rock sensation Bad Wolves are proud to announce a summer 2020 tour that will bring the band to major markets throughout the U.S. Bad Wolves will hit the road on Disturbed’s “The Sickness” – 20th Anniversary tour with other special guests, Staind, on July 15th in Maryland Heights, MO at Hollywood Casino Amphitheatre. The tour will run through September 12th in Auburn, WA.  The announcement of the U.S. tour comes at just the right time – as the band’s current single hits the very top of the Active Rock charts.

Senior VP of Promotion, Jackie Kajzer says of the accomplishment “I am incredibly grateful to our good friends at Rock Radio for supporting this band, as they have with all Better Noise Music artists.” COO Steve Kline adds “We are proud to partner with Bad Wolves to attain this incredible achievement. Talented artists with undeniable songs combined with strategic touring and sustained hard work is an unbeatable combination. They are the perfect representation of the success of our artist development philosophy here at BNM.”

Their global breakout single, “Zombie,” is platinum in the U.S. and Sweden, double platinum in Canada, gold in Australia and IMPALA Diamond in Europe. The track has topped charts worldwide, including the U.S. iTunes overall and rock charts, Billboard’s Mainstream Rock Songs chart, Spotify’s Global Viral 50 chart, while also reigning atop the Active Rock radio chart for three straight weeks. The official music video for “Zombie,” a tribute to the late singer Dolores O’Riordan of The Cranberries and an homage to the original, has garnered over 255 million views across platforms. On June 19th, 2018, Bad Wolves presented a $250,000 check to Dolores O’Riordan’s four children, with a continued promise to donate all of their royalties from the song to them.

In 2019, they continued that momentum with their sophomore album, N.A.T.I.O.N. The stunning 12-track follow-up to their debut album, Disobey, is a bit of a departure – staying in the same realm musically, but breaking beyond. N.A.T.I.O.N. came in at #1 upon its release on the Top Hard Rock, Current Hard Rock and Billboard Hard Rock charts.

Bad Wolves is currently on the road with Five Finger Death Punch and special guests Megadeth, for their winter European tour, which started on January 22nd – in Stockholm, Sweden, and runs through Thursday, February 20th in Budapest, Hungary.

8/23 – Noblesville, IN at Ruoff Music Center

8/27 – The Woodlands, TX at The Cynthia Woods Mitchell Pavilion