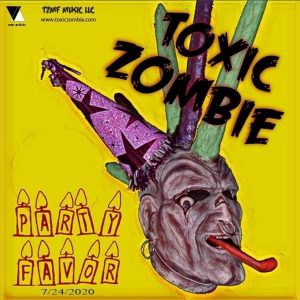 One of the most fun, happiest bands around, Toxic Zombie have a new video for “Party Favor.”

The song starts out simple but effective; Bishop Freeman Manfree and his guitar.  The singularity of the guitar is accompanied well by the simple black background with whited out silhouettes.  I couldn’t predict what would happen next, vocally or visually, which is always the sign of a good song…and I was right.  The addition of the beautiful Starbie SixtySix’s voice and the visual color explosion was awesome at 30 seconds in.

But wait!  At 1:00 it gets even better…. speeds up, fuller as the band sings: “I’m not your party favor.”  Then Bam!  At 1:30…that’s Toxic Zombie at its best.  Just a little more to 2:23 and Lugz provides a fast and fantastic drum fill, followed quickly by a signature Freeman Solo.

There were two parts of this song that caught me off guard: One was Dead End Johnny’s vocal contribution, (I’ll let you hear that for yourself) and the other was Freeman’s last four notes to the song; Brilliant.  When I say caught me off guard, I mean unexpected.  And now…I see exactly why the members of Toxic Zombie composed it that way.

This song is really great.  If you are a Toxic Zombie fan, you’ll love it.  If you haven’t caught on yet, this one just might do it.

The video is visually pleasing.  The characters are always interesting.  The musicianship is top notch.  And best of all…the members are some of the nicest people in the scene.

Tonight, I went from a Post Grunge Spotify playlist to a Toxic Zombie listening extravaganza.