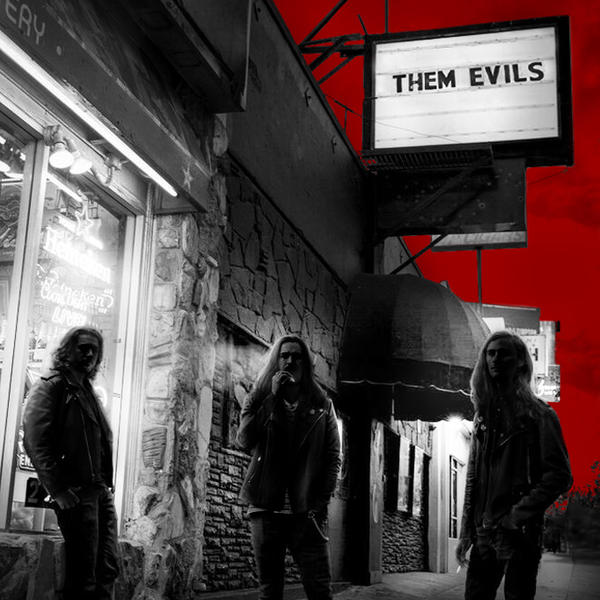 Twenty years late to the famed Sunset Strip, three piece rockers “Them Evils” are reviving the scene…well at least they are trying.  A little 1970s Zeppelin, and a little The Darkness, Them Evils have created a groovy somewhat enjoyable four song self-titled EP.

With a reputation I suspect worse than they really are, Jordan Griffin (lead vocals and guitar), Jake Massanari (bass), and David Delaney II (drums) are the ones we will hold responsible for keeping good old groovy rock and roll alive in 2016.With self revealed classic inspirations AC/DC and Led Zeppelin, and with two-thirds of the band coming straight from the underbelly of Las Vegas, perhaps their reputation as depicted by their namesake is true.

“We pretty much made our own scene,” Grifﬁn says. “We started out doing straight up rock and roll, and that’s what we’re still doing… that said, we’re always evolving.”

Track 1:  “Untold” is raw and guitar-driven, catchy song.  The lyrics are a bit corny but hey…most everything from the Sunset Strip, circa anything 1980s or 1990s is corny now.  Actually, I think it will be corny until the end of time.  This track is by far the best one on the album.

Track 2:  “Put Your Love on Me” is a faster, more upbeat song, reminiscent of 1984 Raven from England.  “Something new gonna kill me today, you don’t care if I die anyway.”

​Track 4:  “Get You Out” is straight up Black Crowes meets the Darkness meets Queens of the Stone Age…in a garage, at a party in someone’s one car garage.  this track is by far the worst track on the album.