Soulfly is always exciting to see live.  Max Cavalera is the epitome of a rock star.  Humble, approachable, and appears to live and breathe music.

I arrived timely and met up with my friend Mandi.  A quick search and proof of vaccination with ID was conducted and then we were in!

Local Portland band Within the Pyre were up first.  I’ve seen this band quite a few times, and they are friends of mine, but I’m not sure what happened over the pandemic, but they got AWESOME.  Full of grooves and riffs, they absolutely crushed it!

Up next was the very talented Damage Overdose.  Chuck Hudson and his band looked and sounded like a top-notch band, one worthy of headlining any show.  I was positioned on the wrong side of the stage to see founder, vocalist, and guitarist Hudson, but had the pleasure of being directly in front of Damage Overdose’s new guitarist.  Looking super cool and having a great time, his guitar sound was hot a zippy.  I’m sure there is another word for it, but that’s what I concluded.

To my right was a man and his two sons.  One maybe around 8 and the other around 12.  The father was a friend of Damage Overdose, and had seen Soulfly the night prior in Bend, Oregon.  Having the proper ear protection, the kids absolutely loved it.  The older boy got in the pit for a minute and he was beaming with pride.

Third spot on the bill was Short Fuse from California.  The keyboardist had a keyboard on a metal rod that rotated side to side, and front to back…actually, I think it was also 360.  I was a pretty sure I wasn’t going to like them when the keyboardist came out in a fur coat complete with ears, but as soon as they started, I saw the weirdness and uniqueness and enjoyed their very groove driven brand of metal.

The mosh pit grew in size and intensity with every band, and everyone took a little breather while Soulfly’s set was perfected.

Out comes the band complete with Max.  There was no gleaming moment when Max graced us with his presence; he was one with the band, and I thought that was really humbling and cool.  With Max’s son Zyon Cavalera on drums and Mike Leon on bass and backing vocals, I wondered with the exit of Mark Rizzo, how Dino Cazares of Fear Factory would fare. 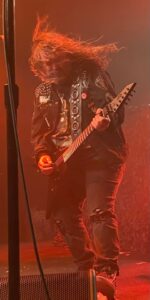 Performing classics along with a few Fear Factory songs inserted, the show was a success.  I pussed out after I took a flying person to the thigh, and watched from the side wall.  The mosh pit was insane.  I overheard someone say, “they really mosh heavy here in Portland.”

I’ve seen Max in Sepultura, Soulfly, Cavalera Conspiracy, and Nailbomb, and think he is absolutely brilliant.  I’ve interview Max twice in my career and when he speaks of music, you can physically feel his passion.  Sadly, I had heard due to covid he wasn’t doing interviews, and being a bit covid phobic myself due to my brother dying of it in May, I was cool with that.

I enjoyed the energy of Dino in the band and thought he did quite well.  Zyon is a monster on drums; Max and Gloria must be so proud.

Unfortunately, I heard it from the source that there was a groping incident after the show by one of the members.  It wasn’t Max, Zyon, or Mike, and I hope it doesn’t tarnish the reputation of the always appropriate Cavalera family.  I understand there was an apology by the one with bad judgement, but many saw it and the person most affected is quite traumatized.  I’d like it to be said that no matter what a woman is wearing, or how star struck or enamored by a rock star hero he or she is, it’s never OK to inappropriately touch someone without consent.  Shock and saying nothing are not consent.

I love Fear Factory and hope t hat this incident is a one-off that doesn’t happen again. Yes, I know alcohol and adrenaline and rock star status can alter one’s perspective of entitlement, but fortunately or unfortunately, depending on who reads this, I am a writer and write about what I see and hear…and in this case, the victim was my friend.  I didn’t personally see it happen, but I heard it from the source.

I dance at two bands:  Soulfy and Prong and tonight was no exception. Max never disappoints.