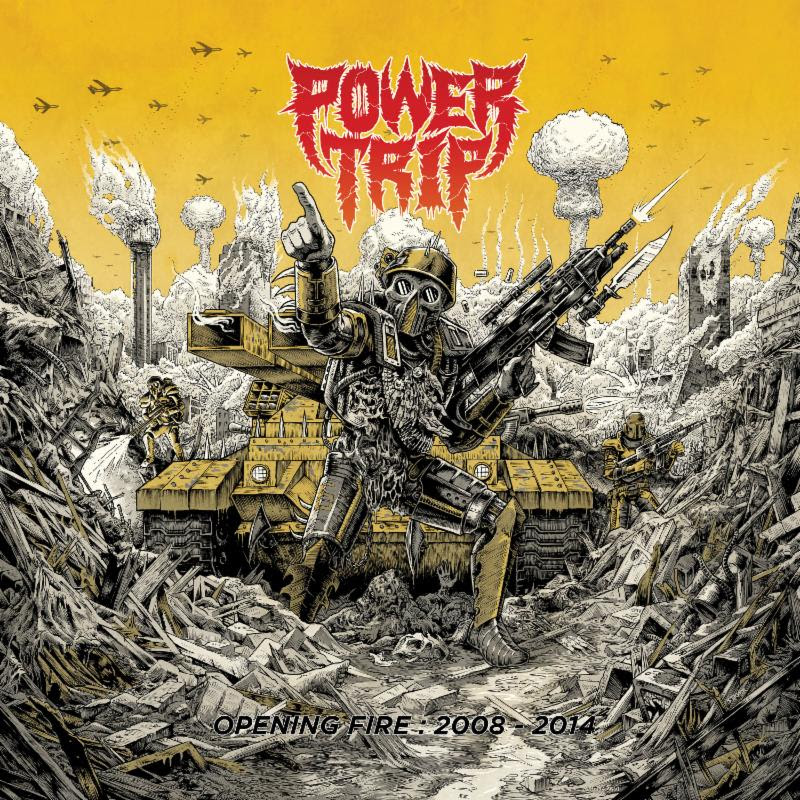 Following its digital release in early 2018 and the vinyl release later in the year, Dark Operative now presents POWER TRIP‘s Opening Fire: 2008-2014 on CD. The CD drops as the band is featured on the cover of Decibel Magazine, and days before the premiere of “Wayne,” the new YouTube series, featuring music from POWER TRIP.”
A collection of the band’s earliest non-LP output, the compilation documents POWER TRIP‘s self-titled 7″, the “This World” single from The Extermination Vol: II LP compilation on Flatspot Records, the “Hammer of Doubt” 2010 version from America’s Hardcore LP compilation on Triple B Records, and the entirety of The Armageddon Blues Sessions. All tracks have been here been remastered by the band’s longtime producer Arthur Rizk and the release completed with bold artwork by illustrator Matt Stikker.
POWER TRIP’s Opening Fire: 2008-2014 is available at Bandcamp HERE and through the Dark Operative webshop HERE.
A track from POWER TRIP has been used in an episode of the YouTube Premium series Wayne. The show follows fifteen-year-old Wayne who sets out on a dirt bike with his new crush Del to take back the 1978 Pontiac Trans Am that was stolen from his father before he died. It is Wayne and Del against the world. The series launches on Wednesday, January 19th, on YouTube Premium.
Also check out the February 2019 issue of Decibel Magazine where POWER TRIP is featured on the cover of the issue RIGHT HERE.
POWER TRIP‘s Southern Lord-released breakthrough album, Nightmare Logic, has earned praise from The New Yorker to a Pitchfork’s Best New Music, to countless best-of/year-end lists. The band was awarded the Best Metal Album Of The Year from Loudwire and song placement in the WWE. Touring relentlessly, the band has headlined tours across North America, Europe, and Japan last year, recently supported Danzig on several US shows, and is and confirmed to support The Original Misfits alongside Fear and Venom Inc. in Chicago this April.
POWER TRIP:
4/13/2019 White Oak Music Hall – Houston, TX @ Hell’s Heroes II w/ Razor, Exciter, more [info]
4/20/2019 The Park Theatre – Winnipeg, MB @ Manitoboa Metalfest
4/27/2019 Allstate Arena – Rosemont, IL w/ The Original Misfits, Fear, Venom Inc. [info]
6/16/2019 Donnington Park Circuit – Derby, UK [info]
6/23/2019 Plein Air – Dessel, FR [info]
6/28/2019 Suvilahti – Helsinki, FI [info]
Opening Fire: 2008-2014 Track Listing:
1. Divine Apprehension
2. Suffer No Fool
3. Brainwave
4. This World (2014)
5. Hammer Of Doubt (2010)
6. Armageddon Blues
7. Lake Of Fire
8. The Evil Beat
9. Acid
10. Questions
11. Vultures