Nile: The Age of Vile Divinities US Tour 2022 – Show Review

I was so excited for this show.  I love watching Karl Sanders play.  Smooth, happy, deliberate.  One of my favorites to interview, I decided no in person interviews for a while due to the pandemic.  My brother died of covid, and I was still a bit leery.

I found myself to be second in line.  Doors opened 15 minutes late and it was cold.  I entered the venue, checkout the merch table and purchased a beautiful new Nile Hoodie and took my regular spot, stage right, front row at the barricade.  I always take this spot because the moshers are generally on the other side, and worst-case scenario, I can ditch out the backstage door to the parking lot.  Portland’s Hawthorne Theater is one of my favorite venues, but I hadn’t been there in two years.  It felt like home.

Soon my friends Terry, Chuck, and Garrett arrived, and the first band came on, “I AM.”  From Dallas, Texas, this band, unknown to me, was really great.  I always try to see all bands at shows and was really quite impressed.  They had a nice groove that everyone could understand and got the crowd going a bit.  The guitar player was exceptional.

Next up was Century Media’s “Sanguisugabogg”, a death metal band from Ohio.  Sanguisugabott means “bloodsucker” in Latin, per Wikipedia, however I have no idea how to say it.  Technically good, the singer was energetic, and they continued to engage the group and the mosh pit picked up even more. 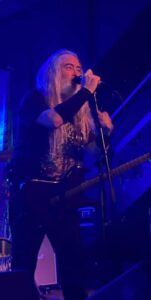 Incantation.  They are always a pleasure to see John McEntee and his band that is Incantation that day.  While members seem to rotate through, I was lucky enough to stand in front of Luke Shively of dismemberment on guitar.  They did a group get together in front of the drums, with their backs to us, prior to starting, and I found that to be uplifting.  The talent level was raised by leaps and bounds.  With great ease, Incantation put on a powerful set.  The mosh pit exploded, pushing those of us in the front row into the barricade; I held on to the barricade for what felt like dear life during Incantation’s full set; it was awesome. 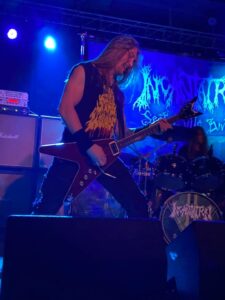 I’m short, which always makes me the doorway in a crowd, or an easy target for someone to push their way into a spot that isn’t really available.  This night was no different.  A pretty girl behind me tapped me on the shoulder and pointed to the spot between my friend Terry and I.  She said smugly with a fake smile, “It’s my birthday and I’m going to be standing right here, so don’t take offense.”  I looked at her and said, “I’m not moving.”  She said, “You better watch your ribs.”  I said, “You better watch YOUR ribs.”  The two of us ladies had a stare off.  I felt like a bad ass for one second, then worried she may stab me or something by her pouting glare.  But, I held my ground.  Obviously not into Nile, the expression on her face when they eventually got to the stage (seemed to have technical issues for a few extra minutes) was priceless.  She looked so surprised and scared, and not happy.  I, however, was delighted.  She managed to force her way a little further down, and all was right in the world, I guess.

Nile, nearly 30 years in existence is lead by guitarist and vocalist Karl Sanders.  Hailing from Greenville, South Carolina, Nile is spectacular to see live. Sanders, with his effortless appearing complex guitar style brings class and maturity to the stage.  Like Incantation, the musicianship and performance was kicked up many notches.  Drummer George Kollias is a fantastic drummer who is also a pleasure to watch live.  Relatively new to the band are Brad Parris on bass and vocals, and Brian Kingsland on guitar and vocals). They are loud and complex, with sexy grooves interspersed between the technical brutal and death metal onslaught.  Supporting 2019’s  Vile Nilotic Rites through Nuclear Blast, they were phenomenal.  Once again hanging on for dear life and unfortunately had to leave my spot for a moment.  Sweaty and bruised, my friend Monique slid into my spot to hold it and I almost literally crawled my way through the mosh pit and crowd to the ladies room.  I was never able to regain my spot, so watched the rest of the show from the back.  I closed my eyes (plus I couldn’t see a thing) and enjoyed the remainder of the show.