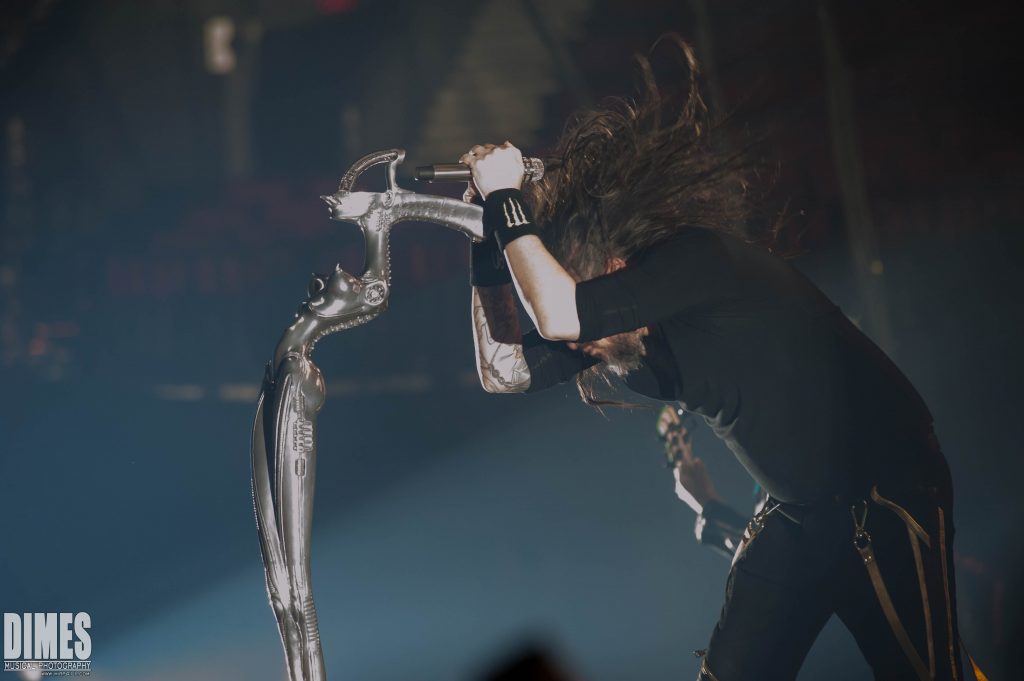 KoRn is one of my favorite bands of all time and definitely one of my favorite acts to see live. I’ve seen them twelve or more times, but this show really special to me because it was the first show my mom was able to attend. When I was in school and listening to KoRn, my mom didn’t really like it or approve, but a few years ago she told me she wanted to see KoRn with me the next time they were in town, and we finally made it happen on this tour.  Part of the appeal for my mom was trying to understand my love of KoRn, and my mom has been a big fan of Brian “Head” Welch’s since she met him on his book tour a few years ago.

KoRn’s stop in Portland was of the last shows of this Winter Tour with supporting acts Breaking Benjamin and Bones UK. During the entirety of the show, there was a raffle going on to help raise money for St. Jude’s Children’s Hospital. The winner of the night would go home with a guitar signed by all the members of both Breaking Benjamin and KoRn. I found it to be pretty awesome that the bands cared enough to give back to the community.

I am very happy to report that the Moda Center was packed with super KoRn and Breaking Benjamin fans. The energy seemed elevated, likely because it had been a while since KoRn played Portland, Oregon.  Everyone around me was nice and we shared concert stories and love for the bands that were about to take the stage.

First up was an upcoming band from London, Bones UK. They were a solid rock act with a heavy blues undertone. Bones UK is a three piece band consisting of singer Rosie Bones with her beautiful smooth voice and rhythm guitar skills, Carmen Vanderburg and her amazing talent on lead guitar, and Heavy on drums, laying down the beat. I really enjoyed Bones UK; they are definitely going to be one of those bands that I continue to listen to after this show. I especially love the part where Bones UK did a cover of the legendary David Bowie’s “I’m Afraid of Americans.” Rosie talked about how our society gives us the message, especially for women, that we need to be perfect, that we need to be perfectly beautiful, as she led us into the song “Beautiful is Boring.” It was clear that the goal was to communicate that we should be proud of who we are and that imperfections are beautiful.

Rosie continued by telling us about a show in London where a guy came up to the band and said basically, they put on a great show…but that they would never be as good as his band because girls can’t play guitar as good as men. He said it is impossible…biologically impossible… that a woman can play as good as man. That was the inspiration for “Girls Can’t Play Guitar” which was one awesome, rock-blues song that really showcased the vocal range of Rosie.  It packed great lyrics, and showed just how well a woman can play guitar! Carmen killed it!

Bones UK, you got yourself a new fan in me and likely thousands more.

Next up was the Pennsylvania native rock band, formed in 1999, Breaking Benjamin. They kicked off their set with the hit single off their 2006 Phobia album, “Diary of Jane.” Most everyone was on their feet, singing along with Benjamin Burnley as the timeless songs took us back to a simpler time. Breaking Benjamin is made up of Benjamin Burley (vocals), Jasen Rauch (lead guitar), Keith Wallen (rhythm guitar, back vocals), Aaron Bruch (bassist, back vocals), and Shaun Foist (drums). Breaking Benjamin is one of those few bands that sound exactly the same live as they do on their albums. Their act is solid and the harmonies are beautiful. With Breaking Benjamin, you can bank on the fact that you’re going to get a great performance when they take the stage, even with the line-up changes they have encountered. They played some of my favorites such as “Believe” and “Polyamorous.” For their last song, “I Will Not Bow,” Breaking Benjamin brought fans up on stage and everyone was on their feet singing along. At the end, Benjamin gave a very sincere thank you to the audience and to KoRn. He said there wouldn’t be Breaking Benjamin if it wasn’t for KoRn. 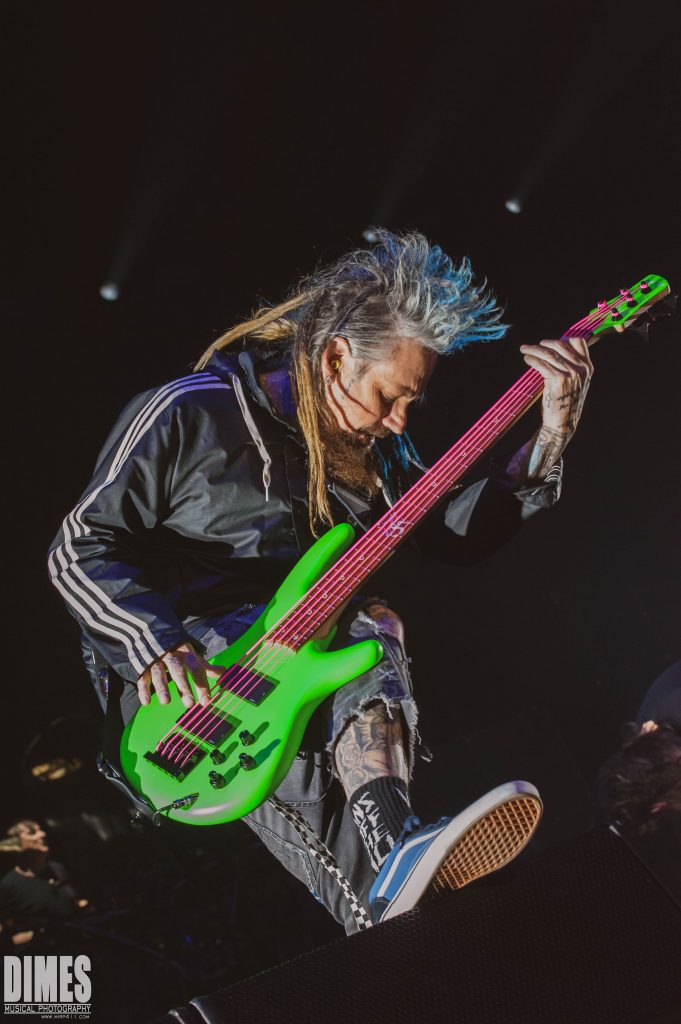 Which brings me to the epic-ness of the night. KoRn! The stage was covered by a huge curtain with an image of a person entangled in cords. An image off of KoRn’s latest album The Nothing. The anticipation and the obstruction of view of the stage via the curtain enhanced the anxious feeling held by everyone in attendance. KoRn is made up of Jonathan Davis (singer), Brian “Head” Welch (lead guitar), James “Munky” Shaffer (guitar), Fieldy (bass) and Ray Luzier (drums). Once the music started, the audience screamed with excitement as the curtain dropped and KoRn kicked off their set with one of my personal favorites, “Here to Stay” off the album Untouchables. This song reiterated to all of us that they aren’t going anywhere, no matter what life throws at them. In case you didn’t know, front man Jonathan Davis lost his estranged wife to an accidental overdose in 2018. The setlist was perfect planned with a great mix of old and new songs including older songs such as: “Blind,” “Clown” (another favorite of mine), “Somebody Someone,” “Faget,” “Got the Life,” and of course “Freak on a Leash.” The newer songs were: “You’ll Never Find Me,” “Cold,” and “Can You Hear Me,” all off KoRn’s latest album The Nothing.

The stage set up was simple but amazing. There were huge columns of what seemed to be just mirrors but would sometimes morph into screens. Ray’s epic drum set is a work of art, Fieldy had some crazy cool hair and a neon bass that you couldn’t miss, and Jonathan with his iconic mic stand. Each member was amazing to watch individually, but when put all together…it was magic.

One awesome moment was when Jonathan brought out the classic bagpipes. All KoRn fans know what song is coming next: “Shoots and Ladders.” KoRn threw in a little teaser of their cover of Metallica’s “One” during this song and it was both seamless and amazing. 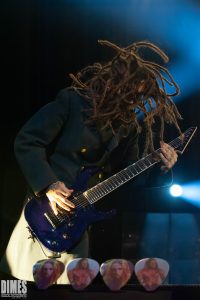 Soon after “Shoots and Ladders, the lights dimmed, the band exited the stage with a little “Good Night.”  The venue was deafening while we all chanted “KoRn” in unison and yelled and screamed for them to come back.

KoRn did not disappoint. They came back on stage with lights moving slowly in all directions to “4U” off the album Issues.  This “thank you” to the fans always feels like a very deep connection between Davis and fans.  Davis has even said playing shows for us is therapeutic for him, and it is definitely therapeutic for us.

I’m not going to lie; I had a tear or two in my eyes during this short song due to the “feeling” and connection Davis made with the crowd.  The comradery between fans and band felt like love and made me smile.

The encore continued with “Twist,” off Life is Peachy, the catchy “Coming Undone,” off See You on The Other Side, with a little “We Will Rock You” Queen cover thrown in.

The show ended with the classic “Falling Away from Me,” off Issues. Jonathan, Head, Munky, Fieldy, and Ray all take to the front of the stage, tell us thank you, drive safe, and goodnight!

What did mom think of the show you might be wondering? Well, my mom really enjoyed her first KoRn concert. She even bought a KoRn t-shirt that she wears proudly. Her personal favorite was “Coming Undone.” 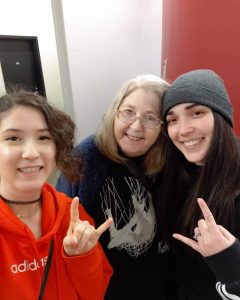 My sister, mom and me.

KoRn put on arguably one of the best live shows around. Not even arguably.  Hands down, they are the best. They take us on a journey through the catalogue of albums that were created and made for different times in their lives, that in turn helped us with different moments in our life. The songs are full of emotion and the energy is high. I am proud to say I am Still a Freak and will be riding on this night for a while.

Thank you KoRn.  Thank you for doing what you do. 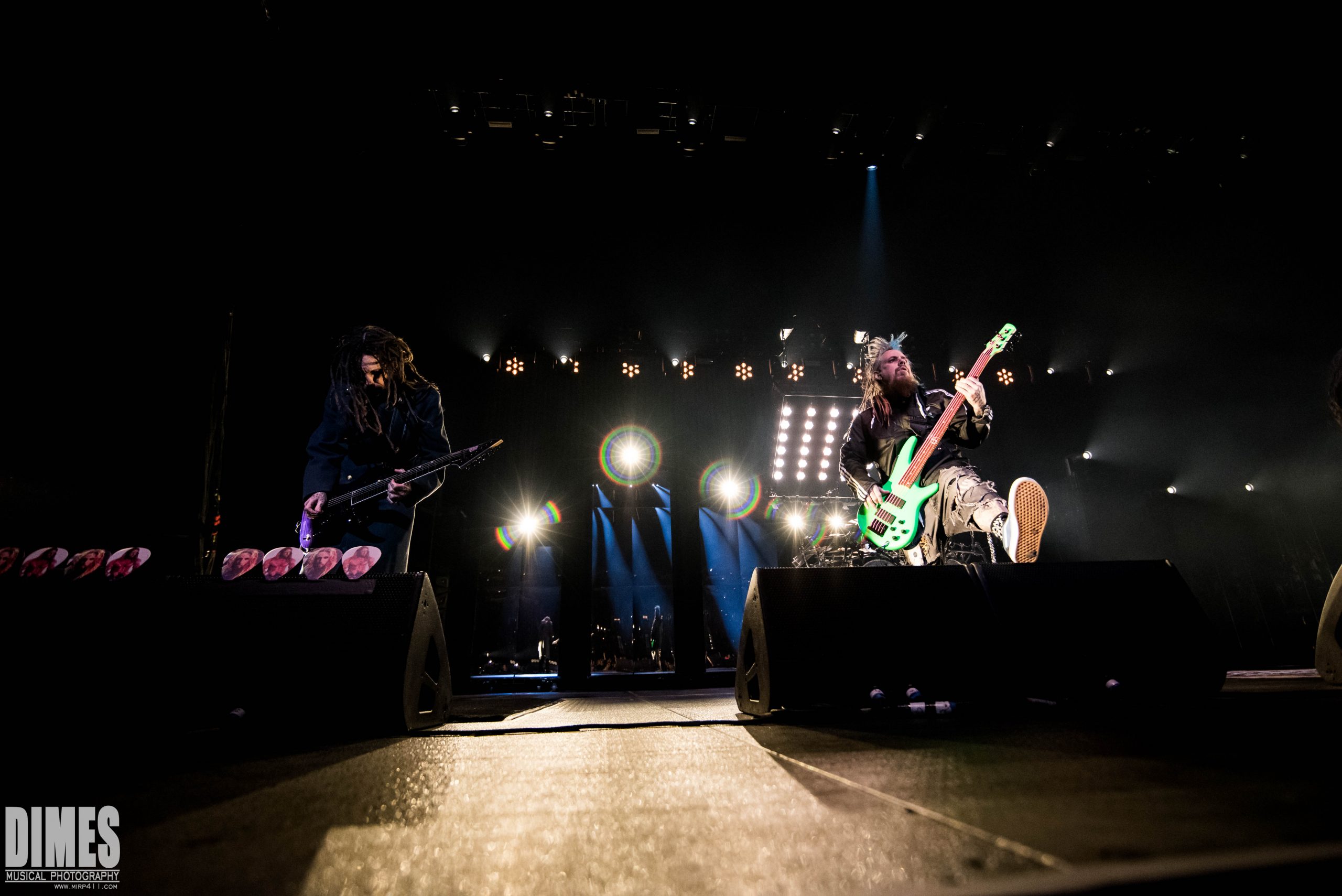 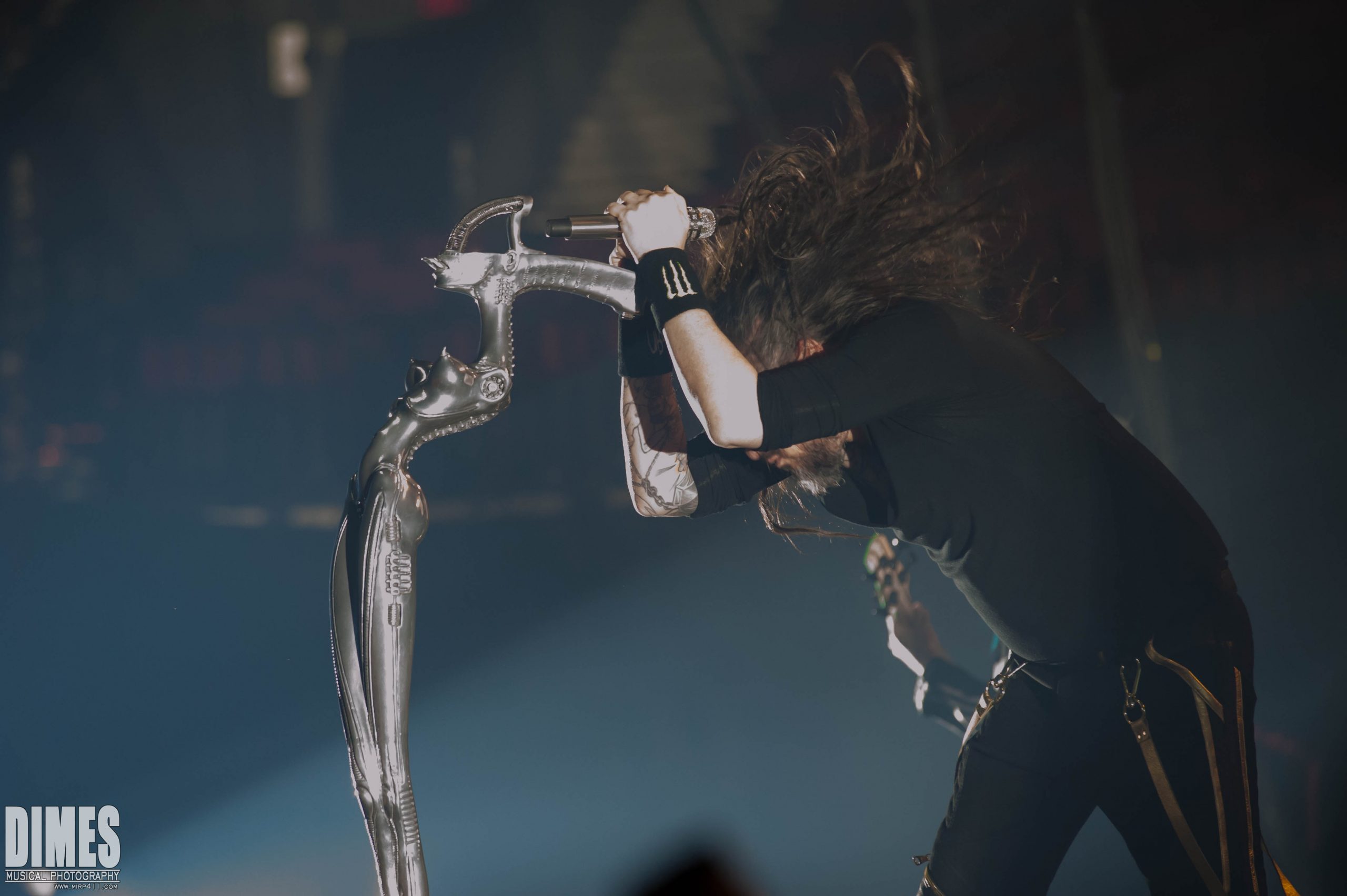 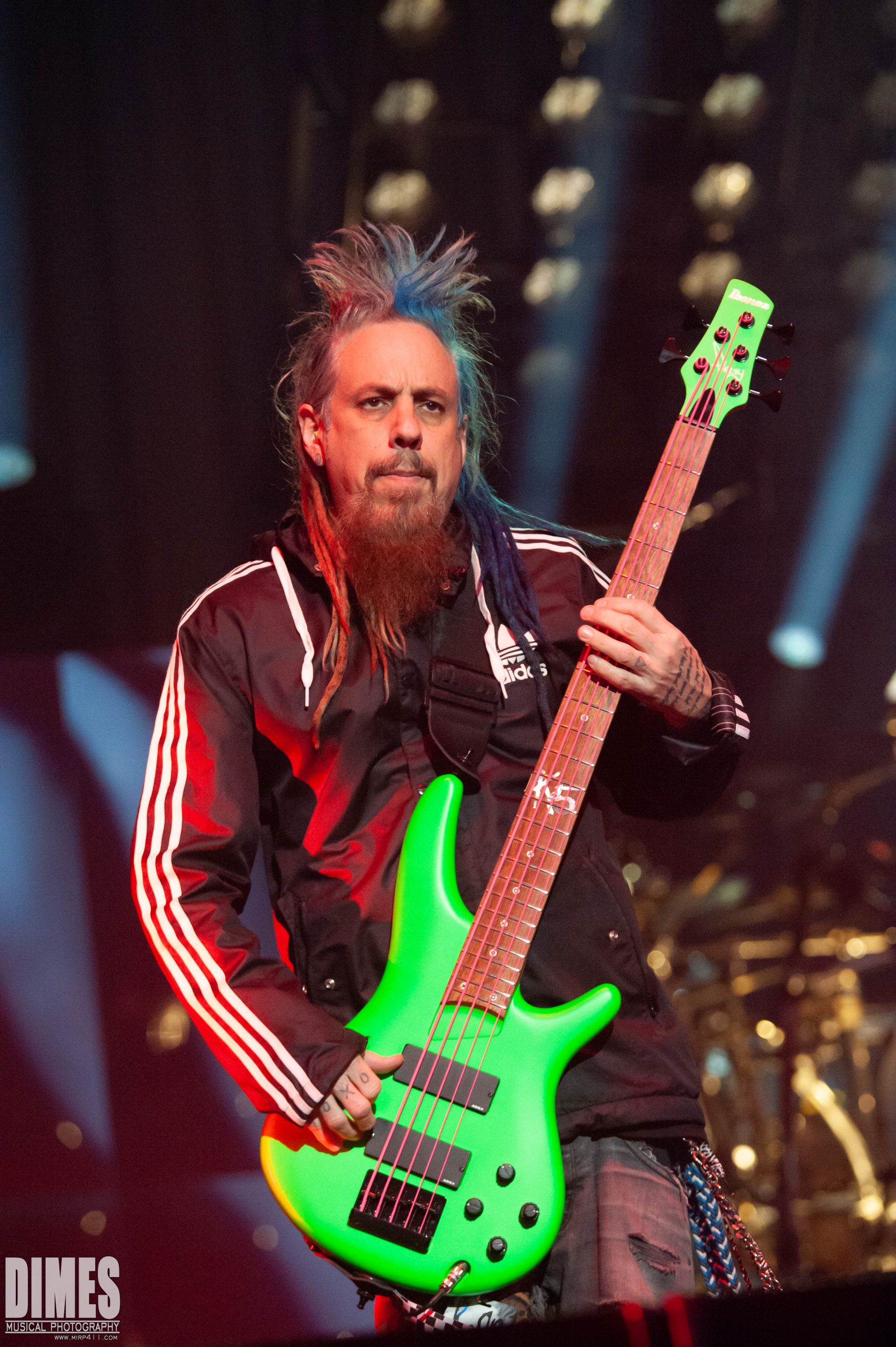 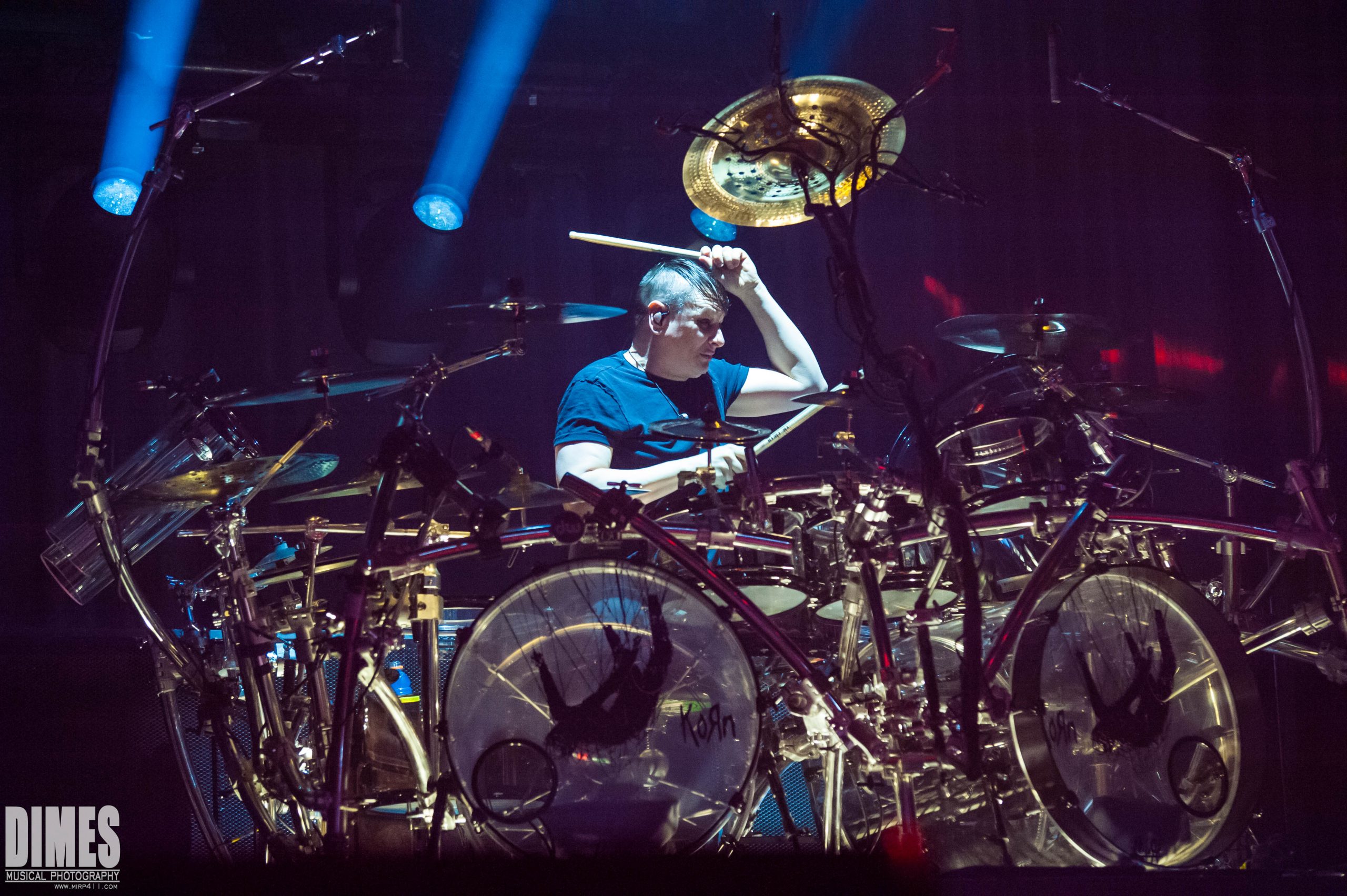 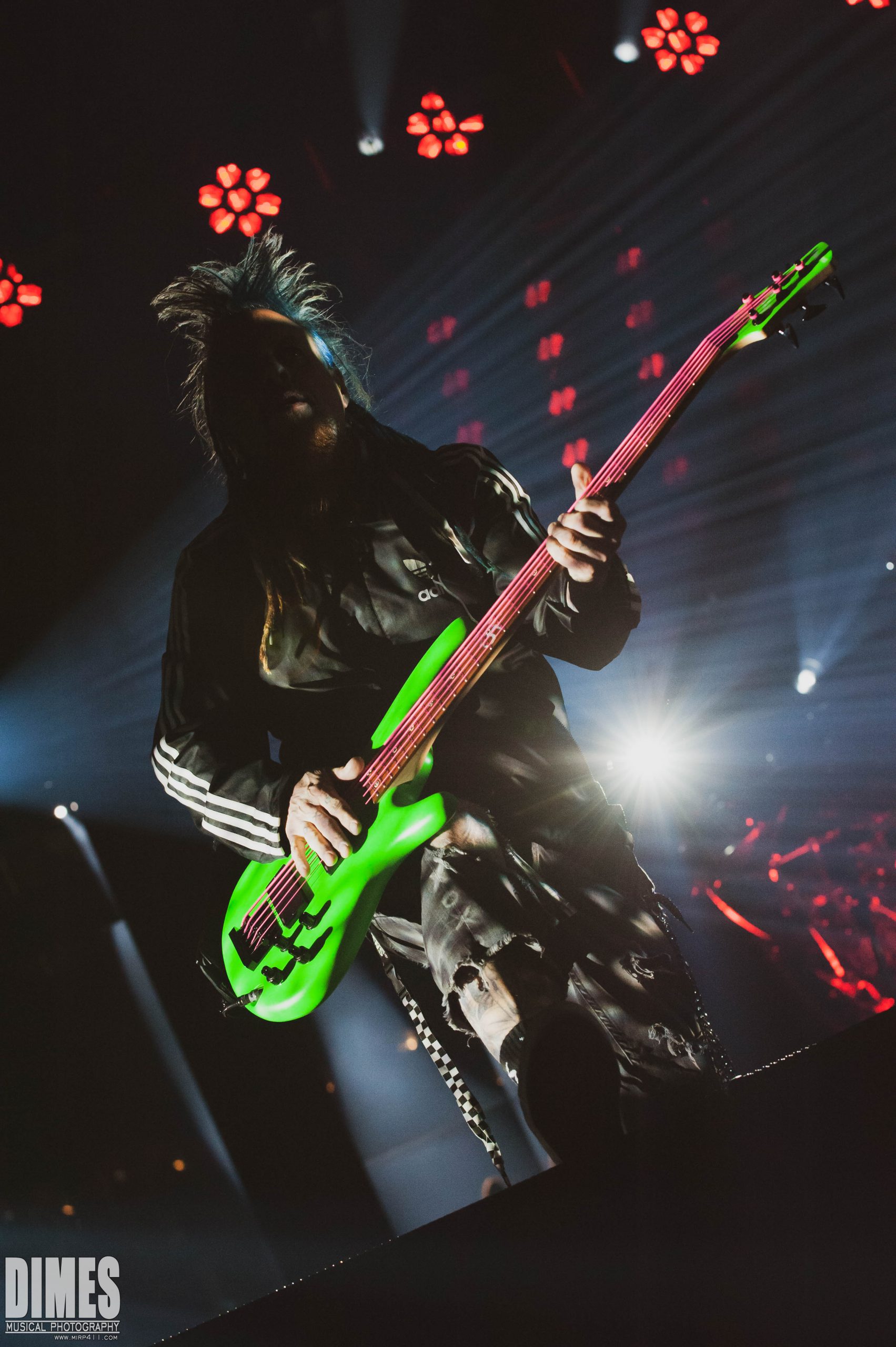 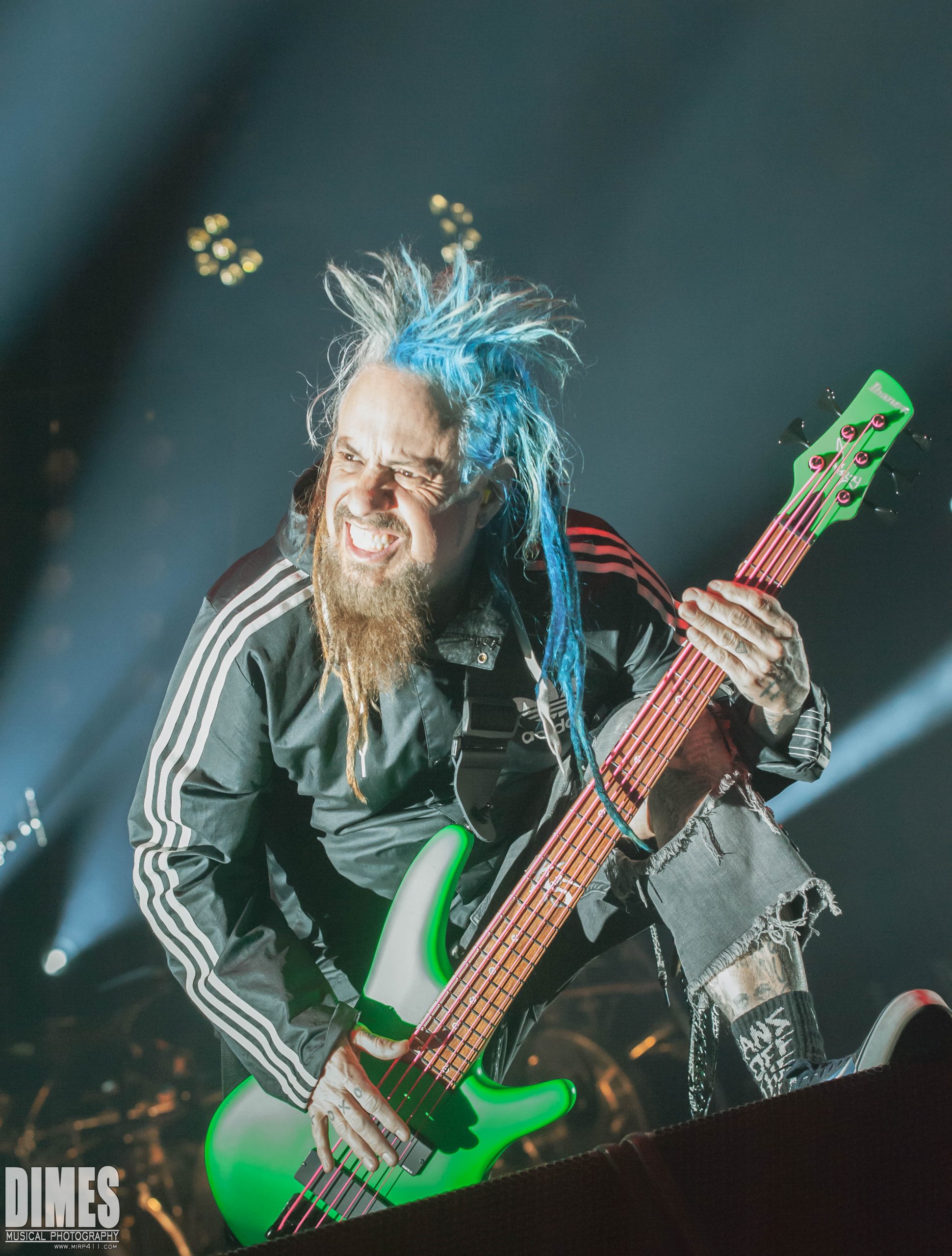 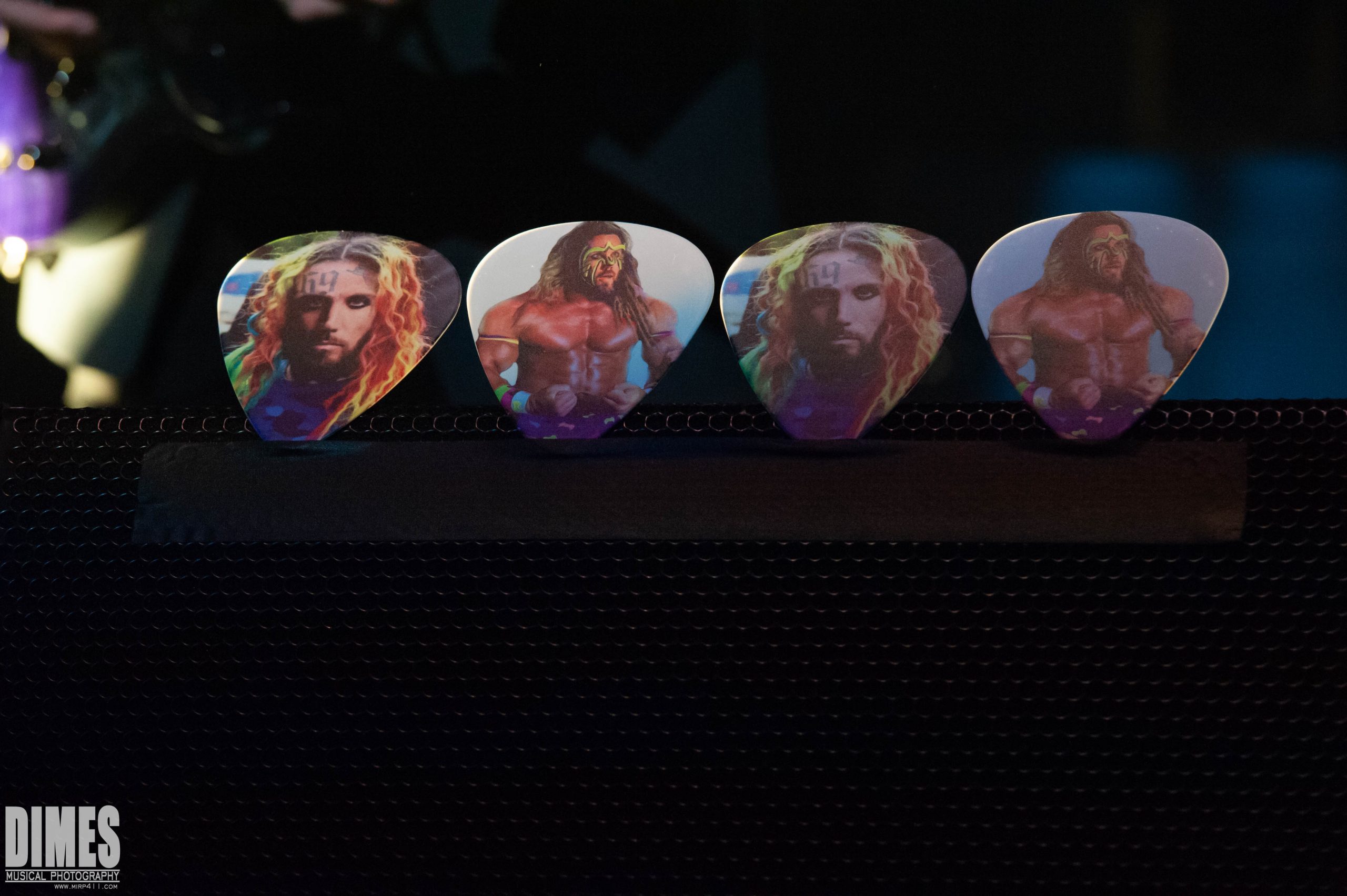 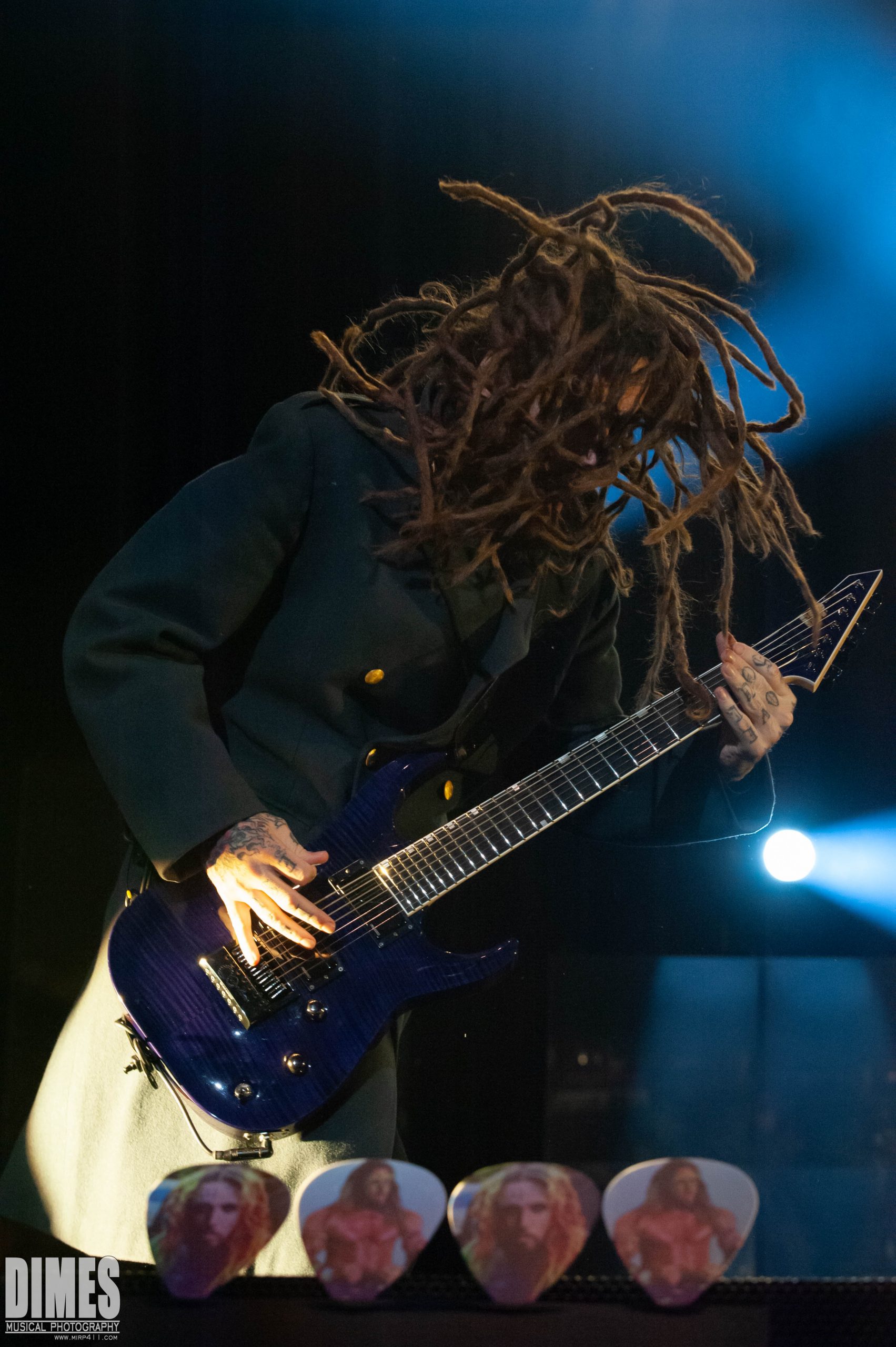 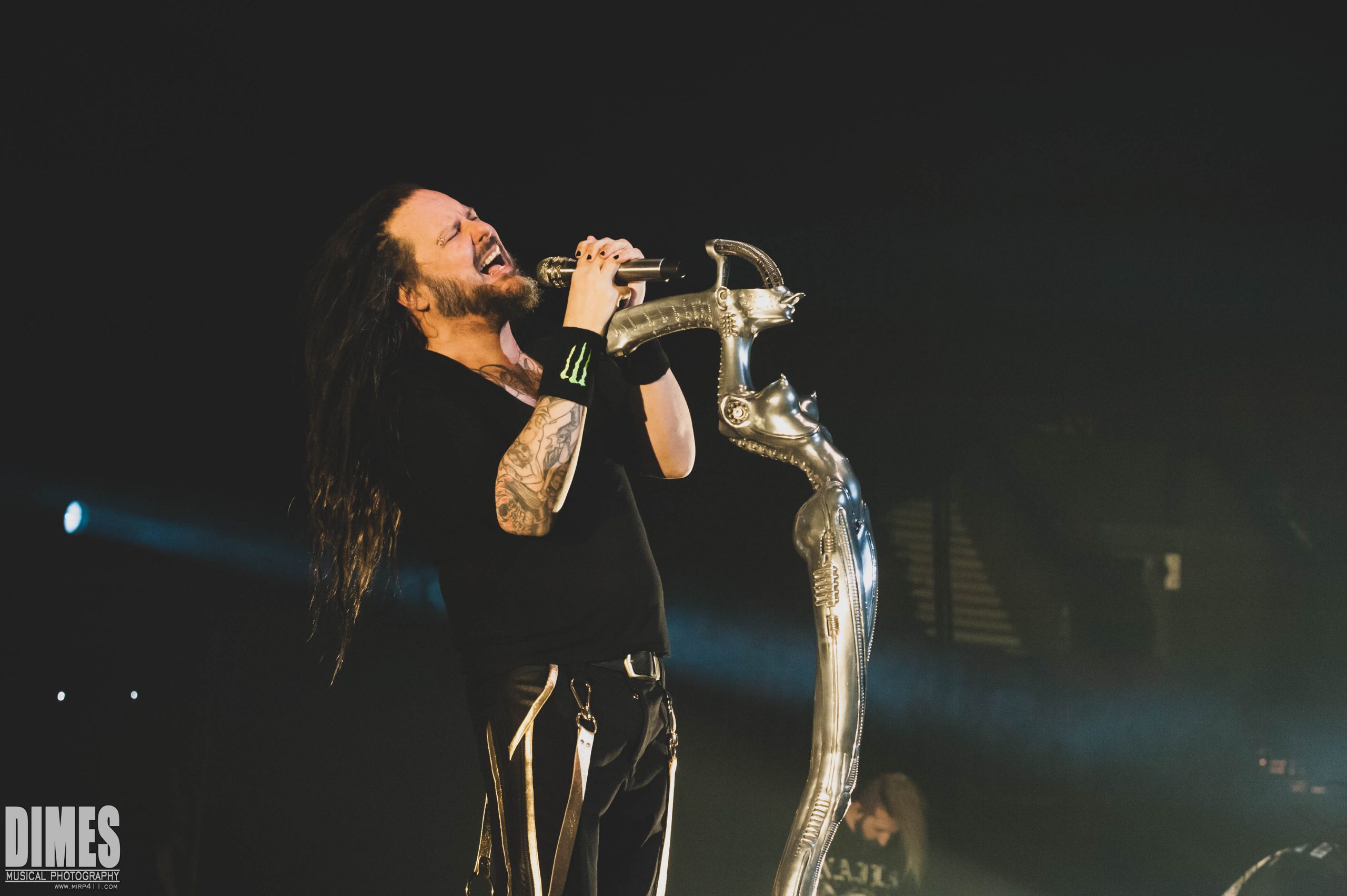 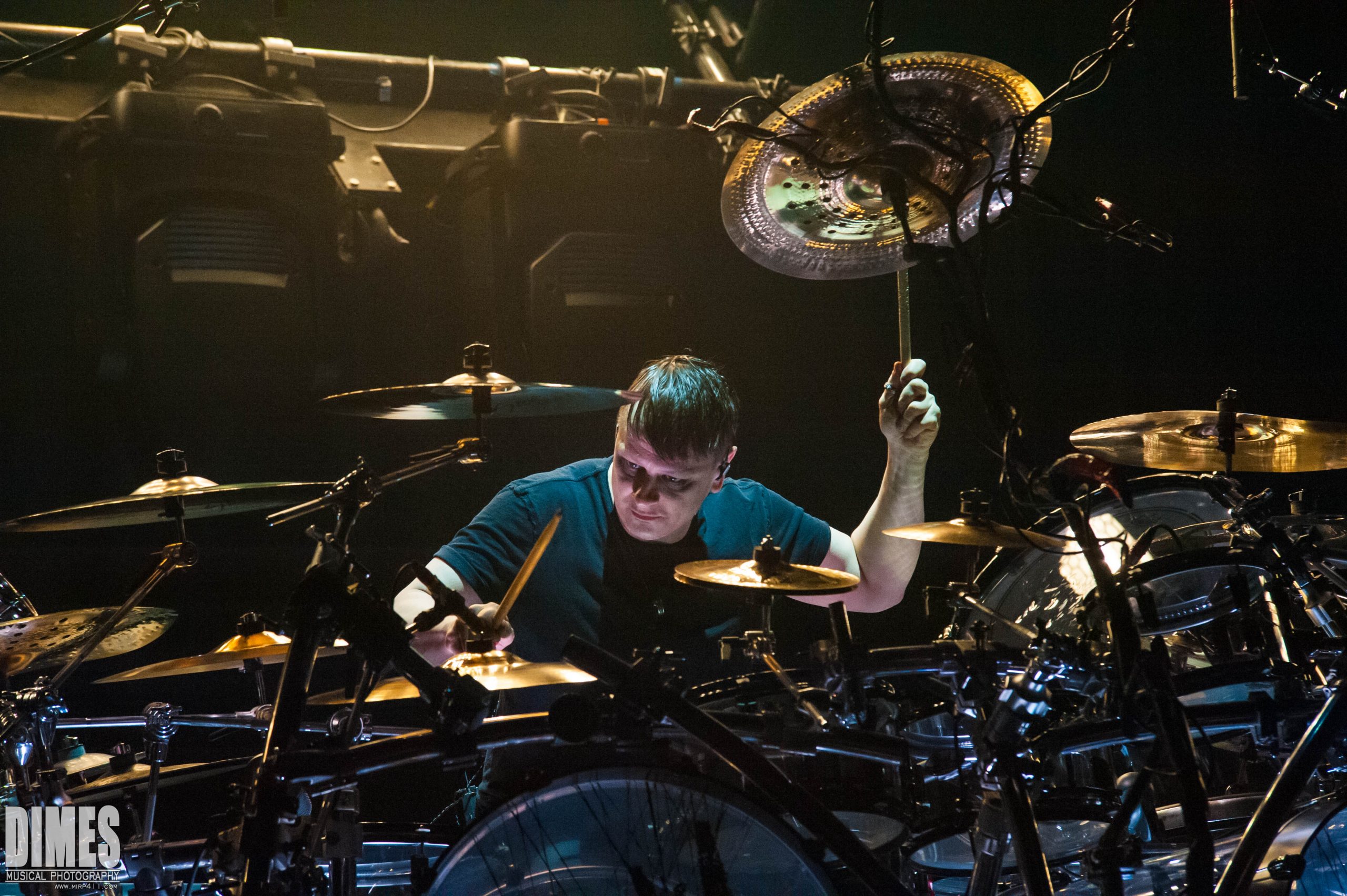 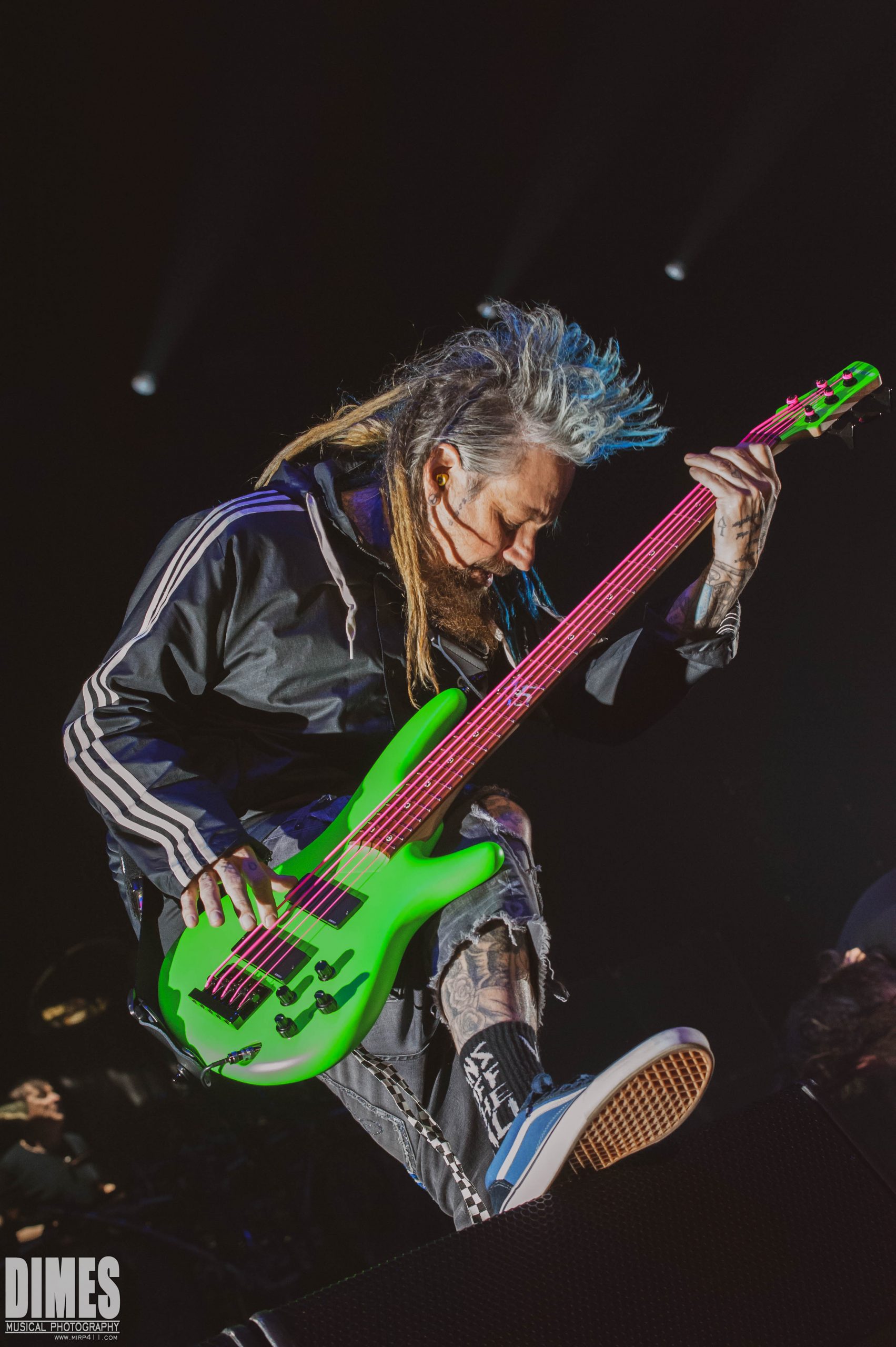 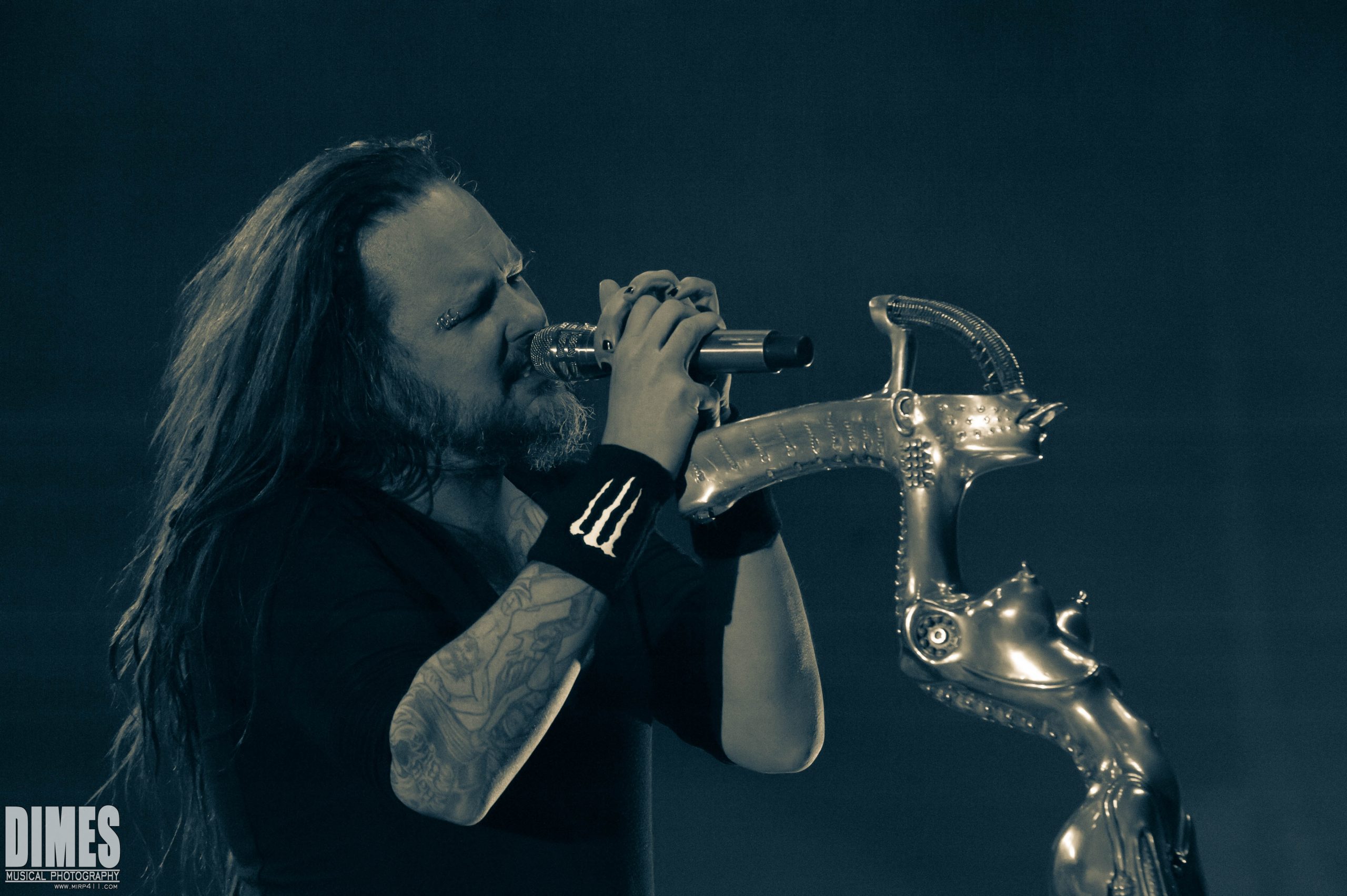 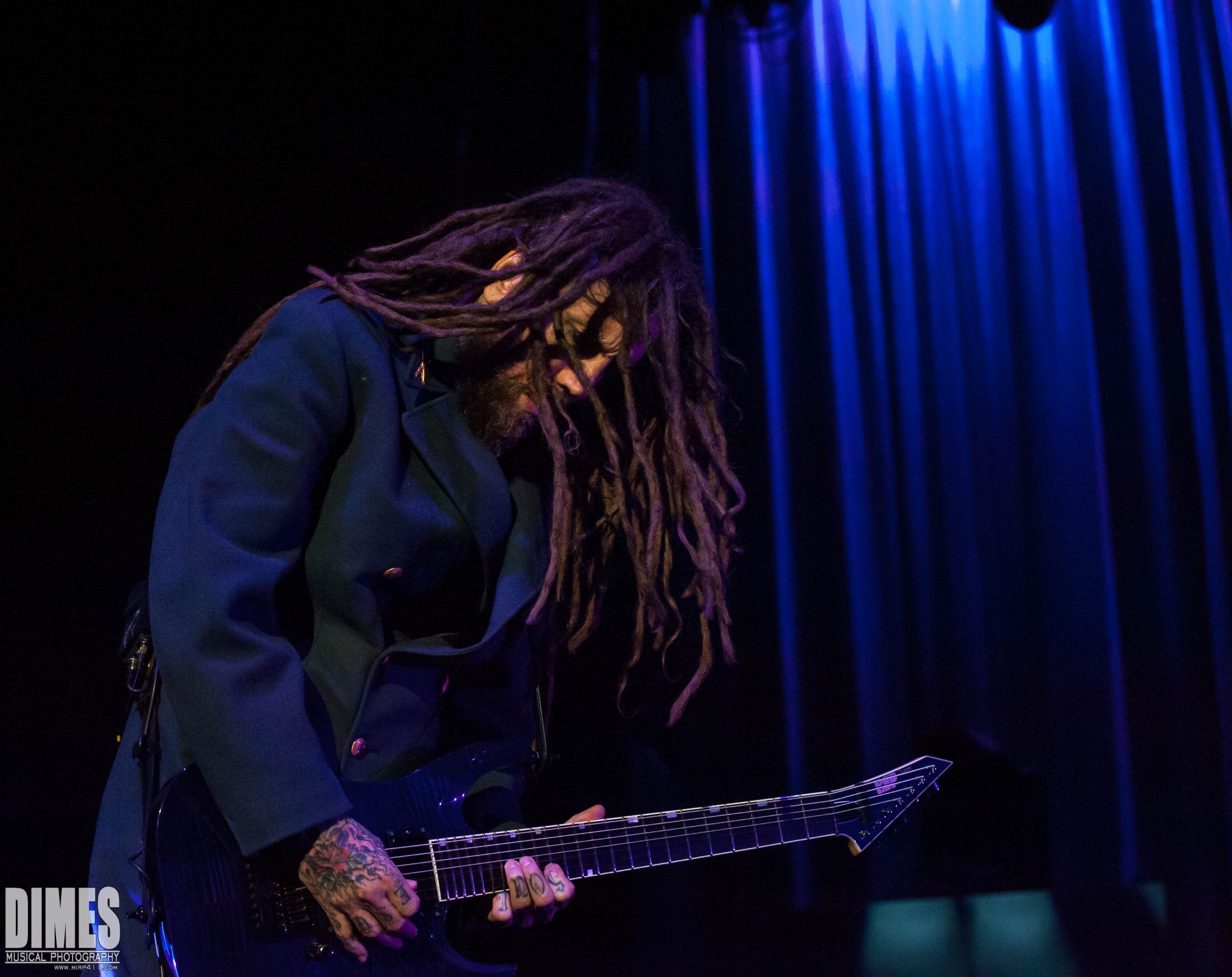 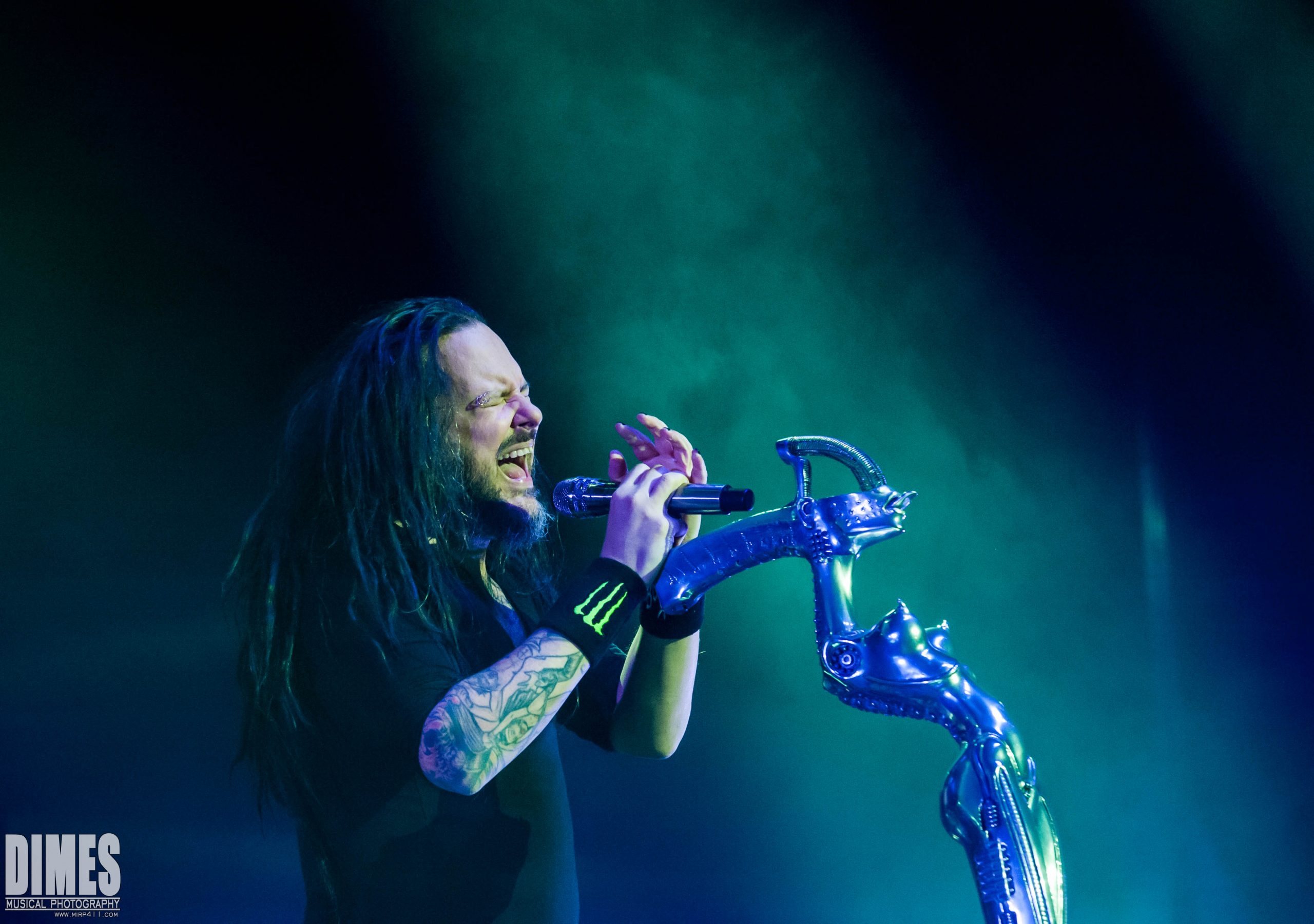 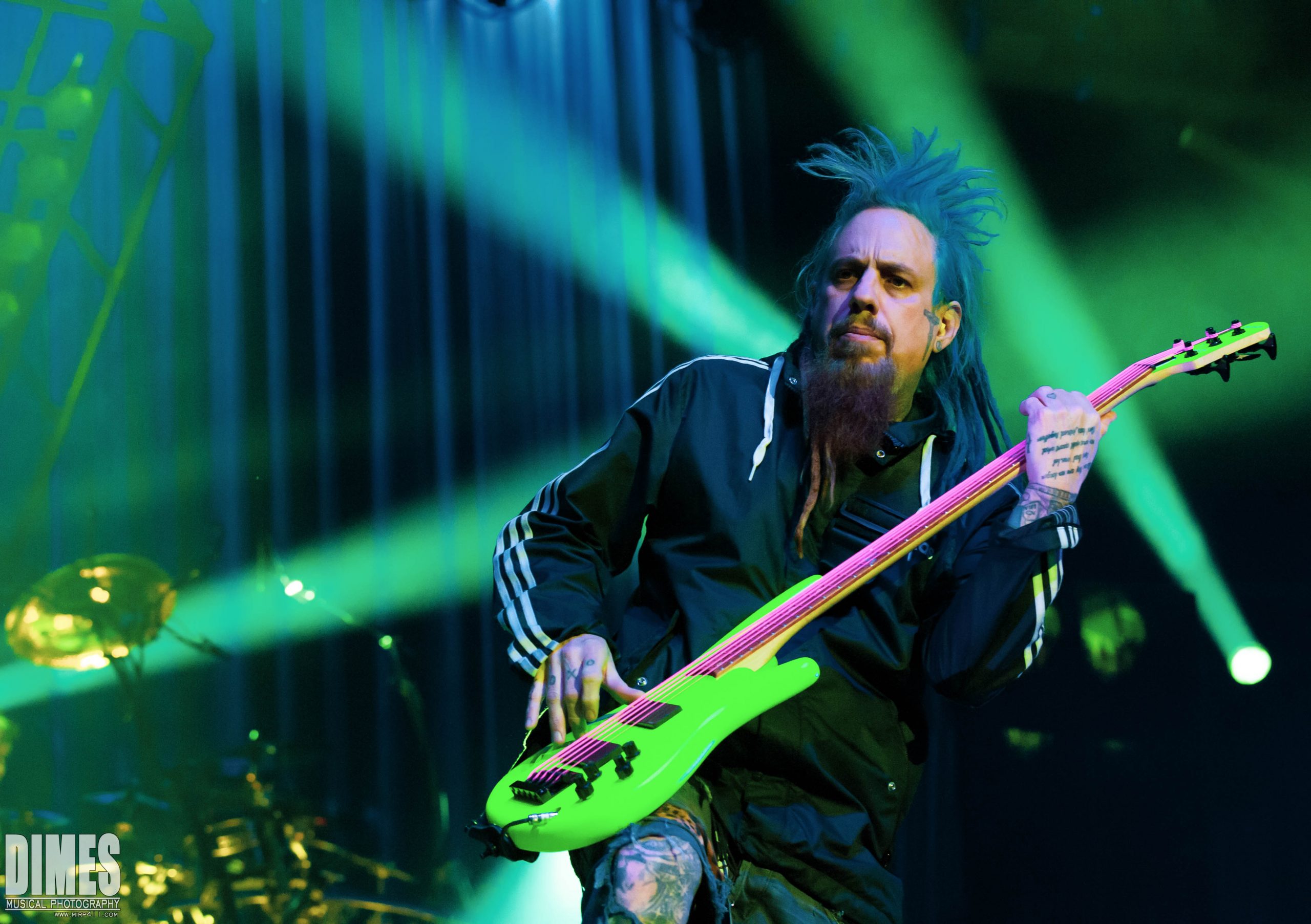