The revived Paris Theater is a beautiful venue.  Small, intimate, well laid out, and sensually decorated.  The show was ambitious with five bands, and that proved to be challenging.

We arrived early and had the privilege of watching John 5 and his band perform three songs during soundcheck. Good for us, but the reason for the need for a three song soundcheck would become very apparent.

The show was off to a late start, with people still in line during Ed to Shred’s set.

Time was to be made up during the 15-minute slots between sets, but that didn’t happen.

Felony Flats from Salem too 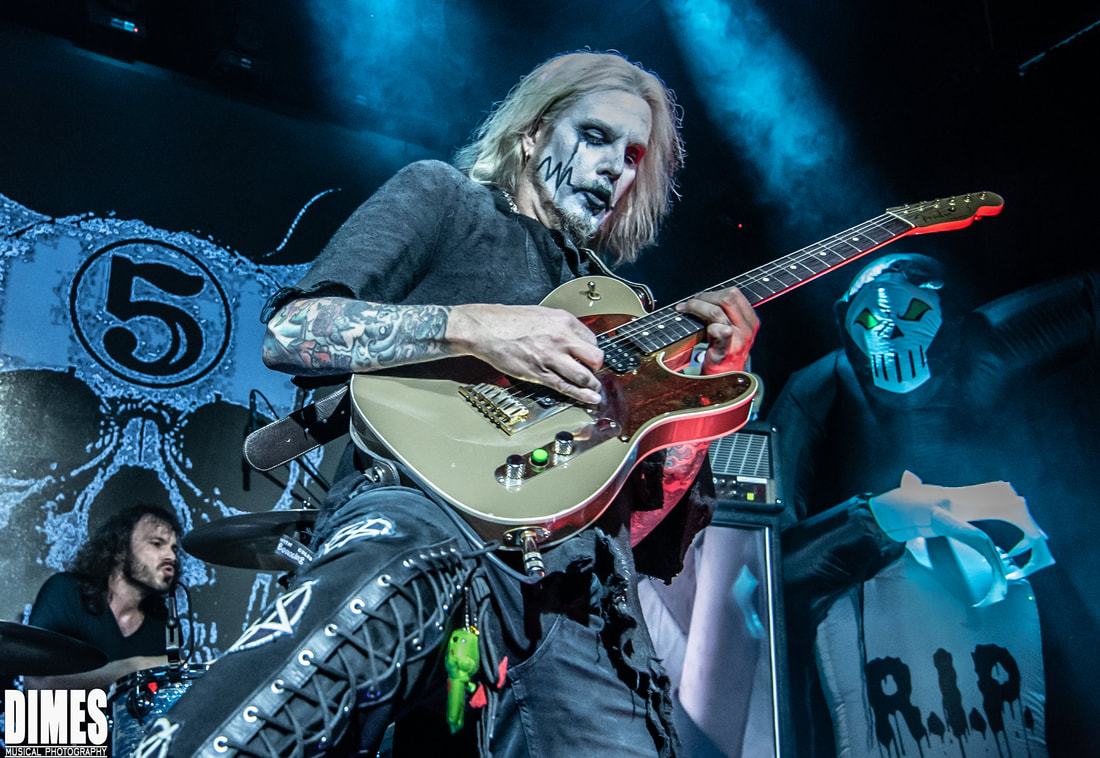 k the stage, and while they were a bit different than the rest of the bands but they were enjoyable.  Looking like a member of the Black Crows, the singer’s face morphed with the sounds that exuded out of his lungs.  They were a success.

Up next was Portland staple Piranhapuss.  The 15-minute timeslot took double or triple, and no time was shaved here.  The sound began to lose its quality, and it wasn’t very good to start with, but the men in Piranhapuss handled it well and soldiered on.

As the much-anticipated State of Balance began to set up, and the problems with the sound became paramount.  It was such a shame, as the members of this band are some of the best musicians in town (Brandon Cook of Black and Blue, and Joe Spencer of a multitude of bands). The first problem occurred when there as only one mic on stage, for two singers, and from there it just got worse.  Again, the professionalism of the band amongst the incompetence of the sound man was visible; ALL YOU COULD HEAR WAS BASS, but all you could see were seasoned musicians that powered through the crappy, immature sound.

John 5 was next, starting noticeably late due to the problems experienced by the opening bands.  The sweet sound of his guitar, came through with relatively good sound, and the crowd responded positively.  Complete with costume changes, and drool, he put on an amazing show, showing us why he is considered among the best of the best.

Notably, at about the half way point, John 5 went to the mic at stage left and kindly said, “sound guy…can’t you ear the feedback off of the snare”?  And as

he finished the SN of snare…the sound man cut his mic.  To everyone’s surprise, including John 5…John 5 paused and headed to the mic on Stage right and was met with no sound.  He approached the middle of the stage and loudly said, “really dude?”  Then he walked over to the first mic that was killed by the sound man, disconnected it, and said something like… “If we can’t use it..maybe someone else wants it,” as he tossed it gently to a fan in the crowd.  They start the next song…and then the entire sound was cut.  John 5 said something like, “It doesn’t matter…we are going to keep playing.”

After some time, and apparently someone talking sense into the incompetent sound man, the sound magically returned.

The buzz after the show was that someone in the crowd threw a beer up into the sound booth, and I understand he doesn’t work there anymore.

After the show we ran into John 5 and we talked a bit about the night.  He is a very personable and nice guy, and you could tell he was somewhat concerned on the impact the night’s escapades had on the show.  We assured him it was still absolutely amazing, and then we wished him safe travels.

John 5 And The Creatures
With local support:
State Of Balance
Piranhapuss
Felony Flats
ED to Shred