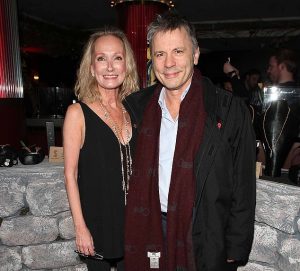 Paddy Bowden,  wife, estranged wife, or ex wife of Bruce Dickenson (Iron Maiden/Bruce Dickenson/fmr. Samson) has died.  They were husband and wife for nearly 30 years before splitting in 2019.  I hate writing that last sentence.  Why does it matter…except that we likely wouldn’t know who Paddy Bowden was world-wide but for her relationship with one of our beloved metal vocalists.

Per “The Independent” and many other publications, Dickinson said in a statement: “This is a terrible tragedy which appears to be a tragic accident. Our children Austin, Griffin and Kia and I are devastated.” and “Out of respect for Paddy we won’t be making any further comment at this hugely difficult and painful time for our family.”

I’m having a super strong reaction to this.  It’s even surprising me.

What I really dislike about this is:

2.  To announce this tragedy, there are headlines all over the online music and entertainment sites that irresponsibly report: “Rock legend’s wife found dead after divorce” – making it sound sinister, like it was because of the divorce.  Suicide?  Murder? “Paddy Bowden dead:  How did Bruce Dickenson’s wife die?  Cause of death revealed.”  No cause of death was revealed in the article, except through the statement Dickenson made himself earlier today that stated “it was a terrible tragedy which appears to be a tragic accident.”  Or my personal favorite (yes, that’s sarcasm) “Iron Maiden frontman Bruce Dickinson’s estranged wife Paddy Bowden, 58, is found dead by emergency crews in protective clothing after ‘tragic accident’ at their former marital home months after they split.” — Is there really a need to tell us or suggest that there was a need for protective clothing during this Co-Vid 19 pandemic?  Was the tragedy that she had Co-Vid or maybe Ebola?  Why during someone’s death is there a need need to mention her ex-husband’s new girlfriend’s name within the title or discussion of how much money Bowden was said to have received from the divorce because of Dickenson’s net worth.  “Bruce Dickenson left his wife for an Iron Maiden ‘super fan'” donned the bottom of the most used photo within the news reports.  It’s cringe-worthy and laughable.

Why does all of that matter?  Why can’t she just have died?  A woman who supported one of the best vocalists in metal for 30 years, died.  That is bad in itself.  I’m sure she had a lot more to her than the headlines.  She supported her husband through cancer, had three children, was a rockstar wife (which I’m sure is hard), and had her own goals and dreams and accomplishments. It’s sad.  There are three children who lost their mom.  It’s sad enough with out the extra drama and headline vomit thrown in.  Why do we need the nasty details and gossip at all? Isn’t it bad enough that someone died?  I remember when Bruce was diagnosed with throat cancer…the most prevalent thing wasn’t that he may not be able to sing again or that he may die (60/40 odds), but that he got it from performing cunnilingus.