The weather could not make up its mind in the beautiful town of Bend on the day of the show. While standing in line, we endured sunshine, snow and cold wind, but what could you expect for a Spring day in the Pacific Northwest?  I personally had no idea of what to expect at this show, as this was my first concert in Bend, Oregon.  It was also my first time seeing Attila not at Warped Tour, and my first time ever seeing ICP.

It was great seeing the super fans, aka Juggalos, come out to see their favorite band. Being an observer, I could tell this band means more than just music to these fans. It’s a family. They would even randomly start chanting ‘family’ at times. Every single Juggalo that I talked to or watched were really nice and genuinely excited. The once skating rink, turned venue, was a bit of a cluster fuck, but once inside, it was smooth.

The stage was on the opposite side as the doors, and there was a concession stand right next to the entrance. There was also a pretty big bar balcony that sort of bordered the floor. This place seemed like it has double capacity of venues such as the Hawthorne Theater in Portland.

I was lucky enough to find the perfect spot at the balcony and got settled in for the show.

First up on stage was rapper Lil Toenail from Florida. Lil Toenail was in costume as… You guessed it…. A big toe.  Most of his songs seemed to be about his dick, but he did get the crowd pumped.

I was surprised to see the stage get set up for a band. I was expecting it to be mostly rap, so figured there would be little to no stage set up. Then Sylar came on and brought some metalcore. I was pleasantly surprised.  Minus the clean vocals, I really enjoyed them. Hailing from New York, this five-piece seemed very humble to be here sharing the stage with Attila and ICP. At times, Sylar’s music reminded me of Korn’s “Untouchables “album. Finally, a few circle pits erupted because…every song had that deep bass and heavy growls that I (and everyone) loves.

Up next was rapper Cage from Los Angeles. Just the one guy on stage, but he had the energy of a full band. He was moving all around that stage, owning it! I thought his rhymes were a bit more poetic than Lil Toenail. He rapped about being an outcast, overcoming negativity, and perhaps my favorite line from one of his songs “You’re the stupidest bitch I know.  Congrats.’ ha!” I was thoroughly entertained by Cage.

From Atlanta, Georgia, the band Attila controlled the room and definitely made some new fans. Their performance was awesome. The circle pit was huge and everyone was having a good time. Singer Chris Fronzak stopped at one point and said that they have been around for 14 years and they have had a hard time fitting into the ‘metal’ world. But here they feel like part of the family which of course was received by huge cheers by the crowd. Starting their set with “Mosh Pit” was the perfect way to introduce themselves, although I thought some people in the crowd were not expecting the intense pit that this band brings.

When the singer asked how many people are seeing them for the first time, basically the whole room put their hands up. Attila played some of my favorite new songs, including “Three 6.” The new songs seemed to lean more towards the metal side.

Of course, they played their big hits “About That Life,” “Party With The Devil,” and “Middle Fingers Up.” I saw many people smiling in that mosh pit, and everyone was thinking the same thing as me:  Attila brought it!

Just by itself, watching the venue transform for what was about to go down was really entertaining. Tarps and plastic wrap were placed everywhere.  They even took part of the sound area down. At that point, there was no doubt that the Detroit, Michigan horrorcore duo that is Insane Clown Posse, was about to take the stage.

You could feel the excitement in the venue filling the air. We were given a show with a back drop that looked like a carnival, complete with a big red striped popcorn container and an ICEE cup. Looking, those set decorations also doubled as a holder for all the two-liter Faygo Brothers.

To start the show, two kid-like characters came on the stage with two big wrapped boxes. The music started and the kids tore the wrapping paper off the boxes, revealing Violent J and Shaggy 2 Dope. Starting the set with “Toy Box,” ICP kicked down the front of the boxes, and the show started. At about 30 seconds in, the Faygo Brothers started being sprayed. The ICP duo had other characters come out, dressed like creepy clowns; It was their job is to keep the stock of Faygo bountiful, and help get the audience dowsed in it.

The venue was filled with a fragrant Faygo root beer aroma as ICP continued their set.  Playing hits from their popular albums The Great Milenko (1997), Riddle Box (1995), The Ringmaster (1994), and Carnival of Carnage (1992), ICP captivated the audience with memories of their music from the 90s. There was no big break or transition between songs, so the party/carnival never stopped…and neither did the flow of Faygo.

I am definitely glad I can now say that I have seen ICP at least once!

The line up with Attila was the perfect combination. 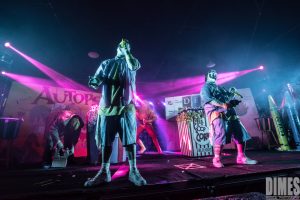