It’s a shiny new casino with a state of the art ballroom that opened just in time to handle all of the sequins, glitter, and rhinestones that would that was considered “normal attire” in the 90s.  The I Love the 90’s Tour brought 90s favorites such as Vanilla Ice, Salt N Pepa with Spinderella, Young MC, Tone Loc, and C&C Music factory featuring Freedom Williams.

All of the classic songs that you hoped would be played.  They included “Let’s Talk About Sex,” “Shoop,” “Ice, Ice Baby,” “Funky Cold Medina.”  The classic songs that we all love so much were present, and so were we.  We were a collective group of people aged 21 – 100 (OK, that may be an exaggeration).

The night made us all remember that simpler time, when boys in white track suits and ridiculously big sneakers looked hot, wearing your trucker cap sideways looked sexy, and when patterned razored-in hair parts were a sign of being up with 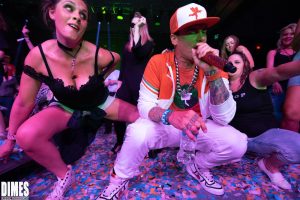 the trends, when “taking about sex” was still a bit taboo, and when music was fun and danceable.

Had this group of 90s superstars played together in the 90s, they’d have sold out Madison Square Garden for a week solid, and here they are collectively, 30 years later, still bringing medium size venues to capacity.

While the years have made them technically older, the years also brought about a quality and sophistication that wasn’t see by these artists in the 90s.

The highlight was definitely Vanilla Ice, who brought fans up on stage to bask in the extreme amount of confetti and glitter; it was indeed a party.  Girls of all ages still went crazy for the icon and he reacted with maturity and grace.

We had the opportunity to talk with him after the show, and I watched him give ev

ery person in the VIP meet and greet his full attention.  He was nice, gracious, and still awesome.

The I love the 90s Tour is something that can definitely be cherished year after year.  The artists, while not so relevant with new releases,  certainly transport us back to a time when life was a little simpler, fashion was a little crazier, and when music was fun.