First off, I’m a girl, and not a wrestling fan…so I have no idea what it’s like to watch Chris Jerico wrestle.  All I know is that he can sing, and people love him.  I love this band, mostly because I love Rich Ward’s Stuck Mojo, and he is one of the nicest guys I’ve ever had the privilege to interview.  I just interviewed him within the year, so we thought we’d wait until next year to request an interview; I was more than happy to just experience it as a fan and write this review. 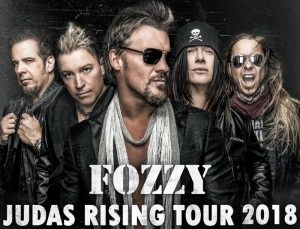 I arrived at the venue just as the first band was started.  As I got out of my car, over walked Brian Allen, the singer for Dark Sky Choir.  He grabbed me and took me to the bus to meet his band mates…and then he disappeared back in the venue, leaving me with his band.  They were very nice, and after a bit of conversation, I ventured into the venue with Jerimia, who was excited to shoot this show.

I arrived inside just as Noise Brigade were ending.  Jerimia and I walked towards the front, and to my delight, two of my very tall friend were standing right in front.  They pulled me in front of them, so I was just at the stage…stage right.  My friends were able to see over my head by miles…so, although I continuously asked if they wanted to switch spots, they told me no.

Brian Allen, one of our local Portland rock stars, is also the singer for the East Coast band, Dark Sky Choir.  He is an amazing front man; one who fronts many bands.  Dark Sky Choir was energetic, technically great, and the buzz around the venue was that the bassist was the bassist for Disturbed, which took fan’s respect level and interest up 10 notches it appeared.  They looked seasoned, but except for Allen, they didn’t interact with the crowd much.  I guess it is an unfair comparison, as the marker for this show is Fozzy, and their fan interaction is crazy good.

Up next was Santa Cruz.  I was positioned directly in front of the bass player, and he was awesome.  The singer looked like he was 15, but clearly had the maturity and voice of a veteran performer.  They were reminiscent of early Guns and Roses, in sound, in looks, and in movement.  I stood next to a pretty girl and her husband.  I know this because I saw their rings.  Her amorous gaze never left the bass player, and I just kept thinking…I wonder if she is fantasizing about the bassist in the presence of her normal looking husband, as I remembered the 80s when there was no fantasizing necessary.  I really liked the energy of this band, and besides Fozzy, they were one of the highlights of the night.

Through Fire took the stage and I have to say there were one of the nicest looking bands I’ve ever seen. They were very polished and put together, looking a bit more like millennial metrosexuals in an Australian metalcore band, than simply rock musicians.  Their look was unified and a specific style, until the singer came out.  The stark contrast between his all black modern urban outfit, juxtaposed with his spectacular red hair.  It put a twist on what I thought the band would sound like…and I’m glad that happened.  They were really great.  They were excellent musicians, with catchy and well-constructed songs, played perfectly.  I did some further research on them after I saw them live, and found that I wasn’t alone in my thoughts about them.  They are currently experiencing some great airplay with their songs.  Their fame, and the hype around them is justified.

Disco music played between sets in preparation for Fozzy.  The group in the venue was very diverse, with many fans that I’d never seen before.  I think Jerico’s popularity must be the reason.  Timely, out came the band, sans Jerico, and the place erupted.  Like a dribbling volcano…causing excitement, but not the full eruption.  Then, Jerico hit the stage.  Fans absolutely went crazy.  His energy and the way about him was so pleasing.  He is a good singer, with an incredible band behind him.  I think of Rich Ward and his Stuck Mojo, and how long he’s been doing this.  Fozzy seems to bring out a breath of fresh air for Ward, and his little dance steps, and infectious smile complement Jerico’s celebratory persona.  They all look like they are truly happy to be there.

Fans were brought up on stage, Jerico had outfit changes, each member had eye contact with every fan, and Mr. Ward, made the way up the catwalk on stage right, to play over the audience.  It was spectacular.

​You’ll never be disappointed if you see Fozzy live.