I have never heard “bitches, hoes, n-word, pussy, and dick,” so many times in one setting…not ever in my life.  Admittedly, I’m not a big fan of rap; mostly because I’m just not that familiar with it.  As a die hard metal fan, when I was asked to cover this show I jumped at the chance.  I think being a music journalist means you shouldn’t be an elitist, closed-minded critic.  Good music is good music, and the more wide-spread your exposure is, the better you are at your job.

Sunlight Supply Amphitheater always treats us well and we had amazing seats.  It’s was hot, but we were under the cover of shade, and when P-Low took the stage at 6:30, there were a lot of empty seats.

My exposure to rap has been 90s old school, Eminem, and some local friends.  I guess I like flowy rap…rap with interesting rhymes, intelligent lyrics, and smooth lyrical patterns.  Up until G-Eazy, that wasn’t what was happening at this show.

I marveled at all of the teen and 20 something girls who were dressed like strippers, sipping what may be their first beers, and doing booty grinding dances while standing on their seats, likely not realizing those of us in the seats behind them were just that…right behind them.  I watched countless men change seats to position themselves right behind them, with big grins and high fives to their friends; the girls were clueless.

I found that the majority of the crowd were girlfriends in pods of two or three, or boyfriend/girlfriend combinations. There were groups of guys, but the girl pairings out numbered the men easily two to one.

P-Low, YNB, Ty Dolla $ign were all progressively beloved by the crowd.  “Put your number twos in the air,” “show me your phones,” “where are all my ladies in the house,” were phrases used by nearly all artists, and the growing crowd responded louder with each request.

Lil Uzi Vert was where I found the vibe of the show changed.  He was charismatic, showy, and the crowd responded by singing back the

lyrics in force; he seemed quite well known.  I was confused when he said, “I play guitar.”  I didn’t know rappers did that.  And then, I smiled silently to myself when he walked out with a bass and the girls screamed, appearing not to notice that it wasn’t a “guitar.”  The girl-shrills were defining towards the end when he took off his shirt.

As Lil Uzi Vert ended his set, I thought to myself:  Where is the lyrical talent, the thought, the skill, the art? 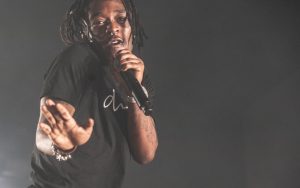 I stepped outside to clear my head and to try and reset my elitist metal preference.  I was able to summon up pure open-mindedness before G-Eazy, which was my goal.

I walked back into the stadium to find the anticipation tense.  Promptly at 9:30, G-Eazy took the stage, and the crowd of fans ran from the concessions into the stadium.

I have to admit.  My reset recharged me and I was quite excited.  The graphics behind the stage were intense, and there was no question why G-Eazy was the headliner of this tour.  I was unfamiliar with his music except for the few songs that I YouTubed in the days prior to the show.  I found him to be cool, void of any detectable auto-tune, smooth, commanded the stage, and showed me a different side to rap.  I enjoyed many elements of his show.

I am happy that we all have the privilege of having our own taste in music. I nearly 100% sure that the majority of people at G-Eazy’s show do not like melodic Swedish death metal like I do.

While I am not the biggest fan of modern rap or pop, I can appreciate it for what it is if it is good.

G-Eazy came with skill, tact, and effort, and his graphics and light show were amazing. While modern rap likely isn’t going to ever be my “thing,” I appreciate what G-Eazy did.  I can say that overall, last night’s show was not good music; the headliner, however, was leaps and bounds above the rest that played that night.