It was probably the most nervous I’ve ever been for an interview since my first ever interview with the drummer from Dying Fetus about eight or nine years ago.

I’m not the biggest Misfits fan, and do not like Danzig, but when I heard I had the interview with Doyle, I got my hands on everything I could of his, including every interview I could read, listen to, or watch.  I knew what an icon he was and was intrigued the more I found out.  I listened to his two releases, and really enjoyed the music, so that was a fantastic surprise.  But the more I watched the interviews…the more nervous I became.  You see, Doyle is a no-nonsense, direct guy, who has no problem being blunt, and telling you to get off the bus if he doesn’t like your questions. 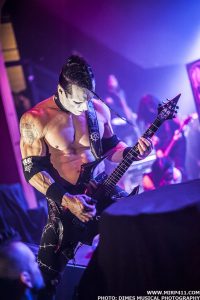 I was given a head’s up early on regarding what to stay away from, and the best piece of advice was, “if you ask questions that would yield a one-word answer…that is what you’ll get.  And if you ask, “can you elaborate on that?”  he will say no.  I was giddy with the challenge, yet sort of scared.  What if the interview sucked.  I’ve never been kicked off a bus.

The interview was scheduled during the first band’s performance, so I missed it completely.  We arrived at the tour bus and waited in the cold.  The tour manager came

out and asked if we were “Ryan,” or some name like that.  We said no.   Apparently, the interviewer before us was late.  So, he returned and said, “Doyle is getting dressed… if it’s audio, you can come in.”  By that time, Ryan or whatever his name was arrived.  I said, “Oh, Ryan is here now, do you want him first.”  The tour manager said, “Nope, come on in.”

Here we go… I thought.

As we walked in, smack dab in front of us was Doyle, sitting on his bed, no shirt, full face makeup and his signature hairstyle called the devilock.  He patted the bed and told me to have a seat.  Jerimia sat opposite us, and I got right to it.  His bedding was black and neat, and there was a picture stuck to the wall of Alissa of Arch Enemy, his love interest.

Before the recorder was turned on, I said, “You are my 106th interview, and I’m a little nervous.  I’ve watched every interview I could find.”  He laughed.

The interview went very well, and we gleaned some great information.  He continued to get dressed while he talked, and we even had a cool interruption by his singer.  I ended the interview saying, “I know you have another interview, and go on pretty soon, so we will conclude.”  He said, “Fuck that guy.”  We laughed.

Originally the post said Doyle would be performing in the lounge of the venue.  I couldn’t wrap my head around how that would work, because it is tiny.  As we entered the venue, to our delight, plans had changed; we’d be seeing him perform in the regular part of the venue.

Doyle came out to screams of delight, and they began to play.  They were incredible!  The singer, that we had just talked to, morphed into this 1980’s English punk front man, starting the show with, “This next song is a Love Song,” which it was not.  With 100% accuracy, he started every song that way, and the crowd loved it.  He spent most of the time on the floor, or spewing water all over himself.  He was awesome!  During our interview with Doyle, he had said that for young kids in today’s time, “start a band, get laid, and get a good singer.”  Obviously, Doyle followed his own advice…well with the front man anyway. 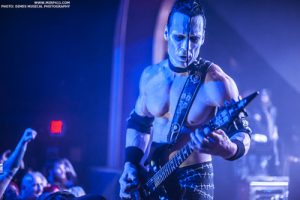 Doyle.  What an amazing man to watch on stage.  Rather than strumming, he pounded.  He walked across the stage as if he was a 400-pound behemoth of a man.  He was ridiculously fit, energetic, and the crowd was awestruck, and in love.

Wearing pounds of Velcro, and very tight tights, Doyle was an inspiration to me, and to the crowd.  For doing this so long, he seems to genuinely love it still.

I didn’t want to ask him the obvious question of how he maintains his amazing appearance of healthiness, but it came up in conversation.  And his world ring true to me today.  “If you don’t want to smoke, don’t.  If you want to get fit, do.  If you want to diet, don’t eat the cake.”  I’ll remember that for life I think.