It was an uncommonly beautiful February day in Portland, Oregon. The sun was out, there was no typical rain, and Cyhra was in town.  Not only were they in town, but it was their first show as a band on US soil.

It’s no secret to anyone who knows me that Cyhra’s “Letters to Myself” is one of my favorite albums for 2017.   I’m a big Jes 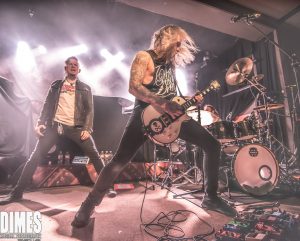 per Stromblad fan and have been for years, but there is something more to my fandom for Cyhra.  The album brought me to tears when I first listened in its entirety,  and the song “Letter to Myself” holds a very sentimental place in my heart.  It served as the soundtrack to something I was personally going through.  So, to say I was excited for this night would be a gross understatement.

Touring on their first album, “Letters to Myself,” in the opening spot for monsters Kreator and Sabaton, I could hardly stand the wait.  I purchased my ticket the date Cyhra was announced, and took the day off work.  I had to take the day off work…. I knew I had the privilege of interviewing and reviewing this very special band on their first ever US date.

Whenever I am granted an interview with a band I love, a gift of Portland’s historic Voodoo donuts is typically the norm.  We at MIRP like to let bands know we appreciate them giving us the gift of their time.  Being a Cyhra super-fan (I’ll give myself that title willingly), and knowing Jesper’s sobriety, I also ventured out to our beloved Stumptown Coffee and asked the barista for a recommendation on the very best coffee they roasted.  Coffee secured, it was on to Voodoo Donuts.  Portland is 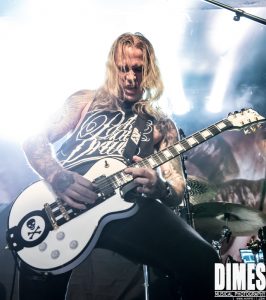 known for a lot of things, and Stumptown and Voodoo were the best and most appropriate gifts I could think of in this own if legalized marijuana and the most strip clubs per capita.

Jerimia, MIRP’s photographer and I arrived to the venue early, and called the tour manager at the arranged time.  As it was the first show, it was obvious that they were busy.  We agreed to do the interview after they played.   I mentioned I had a gift and wondered if I could drop it off to someone beforehand.   “Come on into the venue now,” was the response I was met with. “Sweet!” I thought.  So, Jerimia and I ventured in.  There was gear all over the floor, but in an organized fashion, and it was impossible to decide who and how to drop off the gifts.  So, we headed to the balcony and just waited for a good obvious opportunity, and then we’d be on our way and out of the way until show time.

Hours past.  A friend of mine showed up who is a rock star in his own right.  He is a friend of a member of Cyhra, and this being his town, he told me to follow him to the floor.  As I’m a little shy and don’t like to be where I’m not supposed to be… I was hesitant to follow him.   But after he grabbed my hand and the gifts, I followed.

To my delight, it was right in time for Cyhra’s sound check.  It’s one of my favorite things to experience.  It always feels like the band is playing just for me; it is such a privilege. 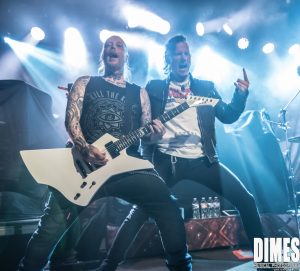 We ventured to the side of the stage as they put down their instruments, and I stood against the wall with my obnoxious pink box of donuts, and bags of coffee.  It was one of those slightly uncomfortable moments like in the movie Dirty Dancing when “Baby” says, “I carried a watermelon.”

My friend and Jake came down the stairs and stopped where I was standing, staring at the pink box.  I presented the donuts to Jake and told him how excited I was for the show.  Right behind him, Jesper began down the stairs.  That’s when I got a little nervous.  You see, I’m a big fan of Jesper.  So, I quashed the butterflies in my stomach and remembered I was a professional.  I’m not often star struck…this, after all, would be my 104th professional interview, and I meet musicians (often my heroes) all the time.  So, as he cleared the final stair, he stopped when he got to me, and I handed him the two bags of coffee.    We ended the short meeting with hugs of gratitude, and they disappeared.

Jerimia and I left the venue, and got the appropriate approved credentials, but I was told I’d have to go through security, and they sent me to the back of the line.  While I had the interview and responsibility of the show review, I had no official pass; just an email verification and my MIRP credentials.  It was 6:39, Cyhra was to go on at 7:00, and I was now standing in a line that was about two blocks long.  I was about in tears.  I was sure I’d miss my beloved Cyhra.

I took a deep breath. 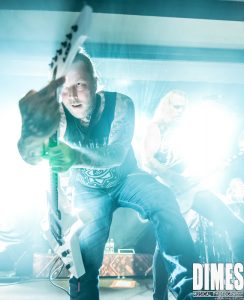 The venue did an amazing job moving the line along, and I was in with three minutes to spare. Knowing how much I love this band, Jerimia stood in the spot that I had earmarked earlier as “my spot.”  I made my way there quickly.   Stage right, front row, just in front of where Jesper traditionally stands.

The lights dimmed, and the opening tones and prerecorded spoken words of “Dead to Me” began. Jake appeared on the stage alone, and began to sing.  His voice heartfelt, the audience quiet…listening contently…pleasantly surprised with the complexity, range, and purity of his voice.

While I was in that long line prior to entry, I asked everyone around me who they were there to see.  The responses were always Sabaton or Kreator.  I thought to myself…you guys have no idea what you are about to see, and I told everyone who would listen about Cyhra and how amazing I knew the show would be.

As Jake winded down that first song, Jesper, Euge, and Alex entered the stage.  The crowd came alive at the sight of Jesper, and they went right into “Letter to Myself.”  Knowing this album intimately, I sang every word, as the men in Cyhra performed it perfectly.

Visually apparent, the members of Cyhra have achieved that level of magic that translates both audibly and visually.  A smile between members, pure engagement with the audience, a kiss on the check or a pat on the back…it seems as if Cyhra is exactly what Alex, Jesper, Euge, Jake (and Peter) are meant to do.

While Peter was obviously not present visually, they did a fantastic job with pre-recorded adjustments so that the music wasn’t without the necessary bass.

The 30-minute set felt very short.  They followed up “Letter to Myself” with “Here to Save You,” “Heartrage,” “Closure,” and ended with “Karma.”

As expected on this first day of the US tour, there were a couple of equipment snafus, but they handled it professionally, without skipping a beat.
While the individual members of Cyhra are each seasoned in their own past experiences, there is something very special about them as a unit…as a band.

As I exited the front and made my way to the back to meet up with MIRP’s photographer after the set, I heard a continuous buzz about how great Cyhra’s performance was from the fans.

Part way through Kreator’s set, I was called downstairs for an industry meeting.  I quickly texted Cyhra’s tour manager to formalize the interview time, and it was arranged to occur after they got settled and had a bite to eat.  Our industry meeting ended, and we too grabbed something to eat.  It was the only restaurant around, and it was about to close, so we grabbed something quick, and scarfed it down to be there in time f 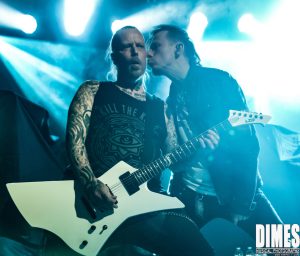 or Sabaton.  As we took our last bites, over walks Euge, Alex, Jesper, Jake, and Seattle photographer Diane.  We hadn’t seen them previously, and truth be told, wouldn’t have bothered them had we seen them.

We went in to see Sabaton, and the phone call came.  I was escorted to a tiny room down

stairs in the basement of the venue, and to my delight, Jake, Jesper, and Alex were all there.  My interview was

scheduled with Jake, but Jesper and Alex participated at times.  The interview was a success, but unfortunately Sabaton was so loud above us, and Jesper was a bit far from the microphone, so some parts are a bit hard to hear.  While I could have edited those parts out, I chose to leave them. There is a part where they speak to having an impact on people’s lives through their music, and Jesper speaks to his sobriety and the responses of encouragement and gratitude he receives from his fans that was very heartfelt.
When it was over, I appropriately reached under my shirt and pulled out my official Cy

hra fan club laminate.  I explained that theirs was the first fan club I’d ever joined, and we all smiled.  They each grabbed a sharpie and said, “then we must sign it.”
​
Talented, kind, gentlemen make up the band that is Cyhra, and they make amazing music.  ​