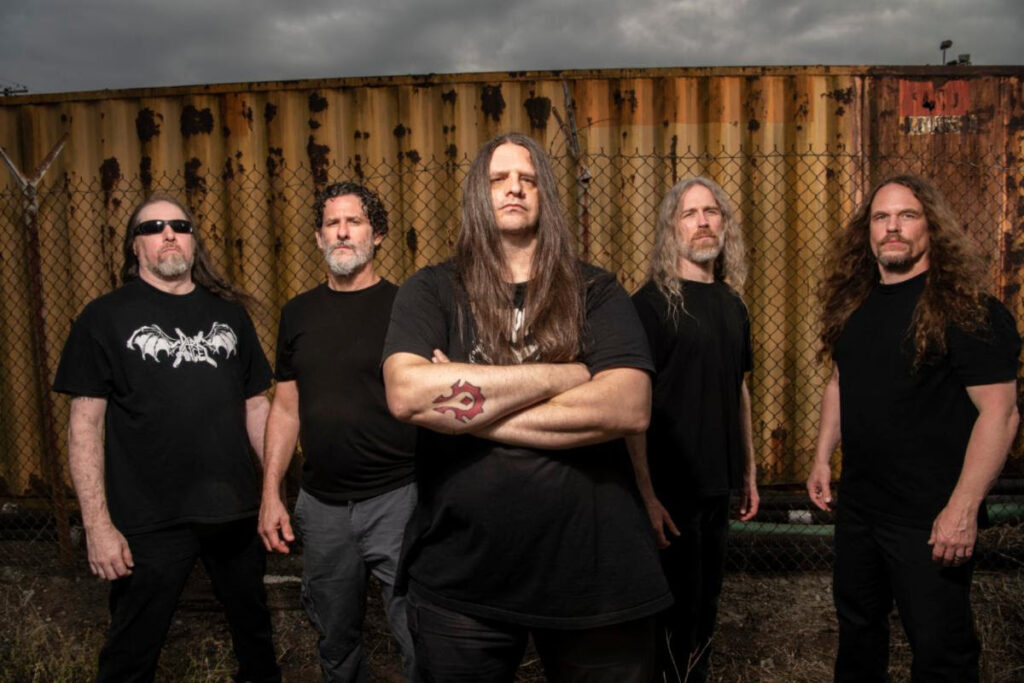 The first time I saw Cannibal Corpse was at the tiny, now defunct, legendary, Satyricon in Portland; it remains one of my all-time favorite shows.  Intimate.  Scary.  Life altering.  There was vomit, urine, sweat, beer, and someone broke their wrist in the pit.  It was terrifyingly delightful, and I found it to be near spiritual.  Standing amongst a sea of metal men, in a venue that held maybe 150, I had my back to the barricade and felt the music, literally.  I remember feeling connected to the crowd and the band in a once-in-a-lifetime perfect night.

As a journalist, I think we all have “our band.”  In my case, it’s Revocation.  They were my second ever interview so many years ago.  Just before I interviewed them, my first was Dying Fetus.  I take no baby steps.

On to the review of the show.  I received a photo pass in my request to do a review, and…well, let’s just say, I’m not MIRP’s photographer, but I tried.

Up first was Connecticut’s Shadow of Intent.  They were fantastic!  A proper way to start the show, akin to Cannibal Corpse, but a slightly adolescent version.  I say that only because there is no band that compares to Cannibal Corpse.

Shadow of Intent hit the stage and the mosh pit erupted.  With my camera in hand, I gingerly approached the walkway between the stage and the barricade.  I turned my camera on, remembered I needed to remove the lens cap part way through the first few shots, and then…blurrrrrry.  Crap.  As I didn’t want to fiddle with it while they were on stage, I just stepped aside and watched.

Shadow of Intent has been around since 2013, and are absolutely ready for headlining shows, however, what a sweet spot to be placed on this bill.  One more thing about Shadow of Intent:  Their drummer is fantastic.  Grooves, riffs, and harsh vocals, they were a pleasure to watch.

Revocation is the band I’ve interviewed the most.  Prior to the show, I met up with Ash, drummer for Revocation, and handed him a box of the delicious, yet touristy Voodoo donuts.  Between sets, prior to Revocation taking the stage, I took a walk to a lit area to try and figure out the camera.  Crap, I AM NOT THE PHOTOGRAPHER!  But, I figured it out and was good to go.

It’s funny.  I can interview anyone, but standing with a camera in someone’s face knowing you have to get a good shot is really intimidating.

David Davidson is a spectacularly amazing guitarist and front man.  His contorted facial expressions while he plays guitar are awesome to capture on film.  I don’t think there is another guitar player who appears to love playing as much as Davidson.  He makes playing Revocation’s complex songs look super easy, when clearly it can’t be.  Not a note out of place, their set was perfect.  Brett is ridiculously good at bass and fun to watch, and their fill-in live guitarist kept up just fine.

WhiteChapel was up next.  I’d seen them a few times before and was well aware that the tornado of bodies flying and the push and pull of the crowd and pit would likely happen.  However, on this night they were a little more demur.  One clean singing portion of a song, and the rest was top-notch, head banging, bodies flying over the barricade, metal.  Killer grooves, what must be exhausting vocals, the men that make up Whitechapel were 100% on-point and enjoyable.

Now for Cannibal Corpse.  I had forgotten how vile Corpsegrinder can be.  Fisher blew snot rockets, picked a bugger and wiped it on his pants (after he threatened to eat it and throw it in the crowd).  I had to turn my head a few times, but my ears were fully invested.  His knife up the ass or vagina impression, and rapidly pretending he was spewing blood from his man parts was funny, however.

In the crowd was a young pretty girl who yelled, “my pussy is the best pussy around.”  I thought to myself…yeah, probably not, but ok.  She made her way to the middle of the crowd, up on a strong man’s shoulders, and waited for the band to look at her as she provocatively loosened the straps on her skimpy top.  The band didn’t even notice; Fisher was talking about a comedy show, “Sometimes it’s a metal show and sometimes it’s a comedy show, it’s a crap shoot,” he yelled.  She finally pulled her straps down exposing her breasts and jiggled them with her hands trying to gain the attention of the band; the band didn’t even look her way.  She quickly pulled her top up and vanished.

Cannibal Corpse is a band that, if you love metal, you must see live.  Extreme death metal, but full of sexy grooves.  Fisher’s voice is like none other, and the addition of Erik Rutan was a brilliant decision.

Thick necked Fisher is a fantastic front man both vocally and visually (except the snot rockets), but hey…they do have an album entitled “Vile,” which happens to be my favorite, and I guess we all have buggers.

I was privileged to stay behind the barricade for all of Cannibal Corpse; what a gift.  After the first three songs were shot, I put my lens cap on and put the camera away and just leaned against the wall, feeling every beat…every note, every deliciously morbid word in my entire body, literally. I don’t dance and I’m pretty reserved, but today, the day after, my hip and neck hurt a bit.  I guess that is the epitome of a good time!

The one show that I always mention as being my absolute favorite happens to be the one I referenced at the beginning of this article.  It was Hate Eternal and Cannibal Corpse over 20 years ago.  Seeing Cannibal Corpse with Hate Eternal’s Eric Ratan was really special.