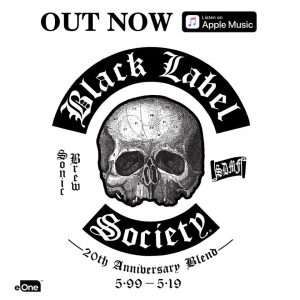 I love the words that accompanied the release in my in box along with the audio.  And I couldn’t say it any better than Zakk’s camp already did:  is nothing like the infamously awful, failed experiment of New Coke. This is the original formula, like Coke Classic, but spiked with Viagra, the Captain America super soldier serum, and triple the caffeine.

You’ve had 20 years to pick up this album.  If you don’t own it, buy it now because it is a little brighter and mastered for today’s devices.  If you own the original, you’ll want this one too.

Sonic Brew is one of Zakk’s best albums in my opinion.  It’s the one I’ve played the most.  It’s the one that has helped me through some of the hardest times in my life.  It’s given me strength and been a friend.  If you don’t know it, do your self a favor and get to know it.  Twenty years later, it’s as relevant as it was in 1999. It’s a timeless record full of passion and pain.  Anguish and love.  It’s thought provoking both musically and lyrically.  It’s emotion that you can hear.  It’s what you wanted to say, but didn’t have the words.

True to the original, the album starts out with the amazing and infectious “Bored to Tears.”  That build up…. the pic pokes that squelch down the neck of the guitar…. that groove.

“Tired of this.  Done with that…never satisfied with where I’m at….”

“It’s less of a floor to ceiling remodel than it is a fresh coat of paint, in preparation for another crazy house party. Zakk Wylde and crew were careful not to mess with the magic captured on the long-lost two-inch tape. Instead, they blessed the master with some note-for-note enhancement, spicing up Sonic Brew with a perfected recipe.” – Zakk Camp/PR

“The Rose Petalled Garden.”  The cry, the anguish…the sorrow and the pain. “Yeah….Yeah…..”   Such a powerful song.  I challenge anyone not to move some part of their body when this song breaks in.  The squeals, the low primal beats, the voice box.” Barefoot baron, and dust distorts the sound.”

“Hey You Digital.” One of the sludgiest BLS tracks …absolutely unmistakably Zakk in every way.  The pretty acoustic starts… “Bound and chained by your silence, things to be known, if it awakens, just ……WHERE… (will it go now)… HEY HEY YOU…WHAT YOU GONNA DO?  WHEN YOU OPEN YOUR EYES AND YOU REALIZE…  The solo is all over the place…in a good way…. It’s a bit of an uncomfortable song until you know every twist and turn…

The acoustic version of “Peddlers of Death” is one of my favorite songs on Book of Shadows.  The acoustic version stands high on its own.  Two completely different “same” songs.  More sinister feeling for sure than the acoustic version.  It invokes something in me that I can’t explain.  I don’t play air guitar or head bang, but there is something in this song that makes me turn into a 14-year-old boy (and I’m an over 40-year-old woman).  I guess my transformation hits with that first note that is held to just about infinity…and then the solo!  That groove is ridiculously good, and I could listen to this song over and over all day.  Any version of this song will always be perfect as long as Zakk is controlling it.  Zakk could do it in any genre…country, hip hop, opera….it wouldn’t matter.  It’s a masterpiece.

“Mother Mary,” the unreleased Pride and Glory demo (and if you don’t know Pride and Glory…go Google it now because you are missing out on that amazing release.) That fuzzy bass.  That perfect lead in.   That squeal.  This song always surprises me.  There is so much going on if you listen carefully.

“Beneath the Tree,” is one of the more out of character songs in the BLS/Zakk catalog, in my opinion (but hey, this whole review is my opinion.).  The up and down vocal pattern is unique.  The softness of his voice is refreshing.  The chug chug chug chug (duga duga) is infectious.  I’ve always wondered what was going on in Zakkk’s life to write this song. Lyrically I can see…but the music is so odd, yet heartfelt and unique.

“Low Down.” One. Of. My. Favorite. Songs. Ever!  A little Stone Temple Pilots…A little 70s AM Gold…A lot BLS.  This song has everything in it.  If I wanted to introduce someone to BLS, this would be the song I’d use as the starting point of introduction.

“Lost My Better Half.”  This song is a perfect representation of the Southern scene (think bands like Down and Corrosion of Conformity and Crowbar) even though he’s from New Jersey.  There is no mistaking who it is though, with the signature squeals perfectly placed.  This song provides such nice pauses, and of course, Zakk’s exquisite mumbling.  Ahhh…I love this song!

“Slipped inside a hole… don’t know where it’s gonna lead.  Lost in a world all alone and I’m
lookin’ for me…I gotta get it back.”

And then there is that groove.  THAT sexy groove.  No one does this better than Zakk.

“Lay waste to a friend, killing all the past.  Pray that all is forgotten. Lost my better half.”

The skillful and descriptive solo is beautifully tucked into this gem of a song.

“Black Pearl.” It’s a spacey…Hendrix-y song.  For me it falls in the “a tiny bit out of character for BLS song” category.  Zakk’s voice is great on this song, however; it’s soft and pretty…FOR ABOUT A MINUTE!  And there it is….at :42 seconds, the song really gets started.  It will take you on a ride…back into spacey at just after 1:10. It’s a bipolar song of sorts, but fits nicely in its own place and in Zakk’s catalog.

“World of Trouble.” “I drank all my fuckin’ brew…and now I aint’ got no more…complete with finger snaps.  It’s a fun song, and another song that I challenge you to not move some part of your body to.  It’s the sludgy groove…it’s the unexpected chorus.  And when you hit the mid-point of the song, it takes an unexpected turn with a repetitive bass solo, layered with guitar pic slides, and then onto something completely different.  I love the ending of this song.  My only complaint is that at 5:20 minutes in length…it’s way too short.

“Spoke in the Wheel.”  I’ve listened to this song probably 1,000 times.  It is the very best song to communicate feeling like you aren’t good enough or you’ve been dumped by someone you love.

Every single word in this song is necessary.  There is not a word or note out of place.  This song was meant to be written.

“Once my blood was strong, and now it’s jaded and it’s thin, and unlike you— I can still tell right from wrong.”

“The Beginning…At Last.”  It’s a stark contract to Spoke in the Wheel in its placement. It’s a pummeling song, and another good classic BLS song.  I always feel like this song is multiple songs blended into one.  It provokes so many different emotions….and just after the 3:00 minute mark…it goes completely sideways with a ripping solo.  Excellent!

Bonus Track – “Black Pearl,” is beautifully done acoustically.  I’m not sure which version I like better.  Like “Peddlers of Death,” both versions stand perfectly tall by themselves.  Zakk’s voice is very pretty on this one.

Bonus Track – “Spoke in the Wheel” (the piano version.)  I just heard this version for the first time while doing this review.  It’s interesting.  It’s more modern and somehow less sad.  In some ways it’s a stronger version of the song, but the classic will remain my favorite.

You won’t find “No More Tears” on this version (as was the US Reissue in 1999).  What you will find is a fresh new upgraded shiny version