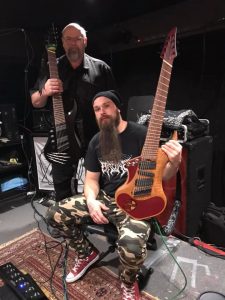 There is a guitarist in town who goes by the nickname “Cricket.”  If you know him you know why that is his nickname.  For those of you unfamiliar, he is the guitarist for Portland’s Eyes of Arcane, and he makes really cool cricket noises.

Last summer I had the pleasure of seeing Eyes of Arcane live and conducting an interview with the entire band after the show.  What happened between the show and the interview was a conversation that stayed on my mind.  It was a casual conversation with Cricket’s dad Curtis and the topic was the custom guitars his son plays.  During the conversation Curtis slipped in that he had made the guitars.  Not a formal luthier by trade, but certainly one none-the-less, what this father made for his son is truly exceptional and inspirational.

Left handed and a unique sound visionary, Cricket’s needs were clearly realized by his father.  Listening closely to his son’s wants and needs, Curtis made two spectacular and very unique guitars.

I sat down with both of them on a crisp fall Saturday morning and asked the questions I had wanted to ask ever since that brief initial conversation.

Note:  It was very early morning and we were drinking strong coffee, so on occasion you’ll hear a bit of “finger” tapping.

You can hear the full conversation below.