Jiva Sakti “You Are The Light” Single/Video Out Today

Jiva Sakti, “You Are The Light” – It’s their debut video/single and it’s really really cool!

I liked it!  They are solid.  Add in guest bassist, The Human, from Amerakin Overdose and you have something super unique.  Yeah, that’s it!  “You Are The Light,” is as unique as Nomad himself.  Both of which are hard to do in today’s saturated music scene and in life. 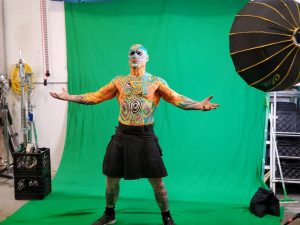 It feels a bit like a peyote trip; spiritual.  Or like a super weird dream that you need to have to move forward with something that is bothering you or hindering your progress.  It’s indoctrination, mind control, and power, yet beautifully necessary.  While you are passing through, you are safe with vocalist Nomad walking you through it like a Guardian Angel with experience.  You aren’t really sure how it is going to turn out until the very end, but you have to stay with it because there is no choice, and you are intrigued.  A little fear, a little playful, a lot of interesting and new elements, you are warned through “You Are The Light” in a manner that forces you to experience it for yourself.

If you listen well…he also shows you a beautiful way out.

It’s out today and you can check it out here:  Jiva Sakti “You Are The Light”

Harnessing the very best of turn-of-the-Millennium alternative/nu metal to a heightened consciousness of our universal connection, the six-song collection (due for late summer/early fall worldwide release) is a timely outpouring of positive energy, world-class songcraft, and deft musicianship.

“Our belief is that music heals and, if channeled with the power and light of the universe, we can be an unstoppable force for healing,” offered English expat drummer Huwy Williams, who formed Jiva Sakti (which loosely translates as “the living force”) with Nomad in 2018.

Discovering a meant-to-be creative synergy with Williams after meeting online, Nomad relocated to Oregon from the East Coast in order to realize their shared vision. They were soon joined by relentless riff machine Jeremy Campbell on guitar. (Bass on the EP was handled by its producer, The Human, also a member of Amerakin Overdose).

Self-proclaimed “Prophet of the Fire” Nomad combines vivid body paint with incredible fitness, as a highly-trained MMA and yoga expert, to rival even the world’s greatest front men.

“He goes into a trance-like meditative state when he paints for stage and video, and remembers nothing afterwards,” Williams explained.

Jiva Sakti incorporate the “om” symbol into their artwork, and took its translation – “the sound of the universe” – as the title of their debut EP. Released through Imusic/Von Artists, The Sound of the Universe is a dynamic, intelligent ride through soaring melody, rousing unison riffage, contemplative poetry, and arresting rap.

Announcing their global presence with the ballerina-enhanced video for “You Are The Light” on June 19, Jiva Sakti also have clips for the entire The Sound of the Universe in the works, plus extensive touring planned immediately post-pandemic.