A wide variety of people made it out to this sold out show. More than a handful of ladies donned a hat similar to ZZ Ward’s signature style. It was nice to see a different crowd than I am use to in the metal world.

To start the night off was Canadian born, young, Dave Grohl look-alike, Billy Raffoul. He was accompanied by a fellow male Canadian drummer and a female bassist from Denmark. His music was a mix of the White Stripes with a heavy side of blues, sometimes David Bowie-esque.  I’ve got to be honest though, watching the drummer play was pretty entertaining. Not only is he a good drummer, but he plays like he is in another world. It seemed like each part of the drum set was connected to a different facial expression.

Back to the music, Billy’s voice was soulful, gritty, and smooth…all at the same time. He played his hits “Dark Four Door” and “Driver.” Billy and his band put on a set to remember, ending with their cover of the mighty Jimi Hendricks’ “Fire.”

Next up was a very energetic duo Black Pistol Fire. This rock duo consisted of Kevin McKeown on guitar/vocals, and Eric Owen on drums. This band was just pure energetic rock.

Kevin moved around a lot on stage, and at one point, jumped down into the crowd and made his way around, playing and singing to excited fans in the audience.  You could tell that he was having a good time and breathes music!

They provided a good mix of lyrics and all out jamming.  If you want sheer energetic rock, check them out.  They have a new album out called, “Deadbeat Graffiti,” and during this show they played their hit “Speak of the Devil,” which was very enjoyable. I was thoroughly entertained and would see them again for sure.

During my patient wait for the one I came to see, miss ZZ Ward, I listened to people talk around me. Someone mentioned how ZZ used to write songs for Adele, another person mentioned that she hoped ZZ plays the Lindsey Stirling song featuring ZZ Ward “Hold My Heart.” Another group were talking about their experience the last time they saw ZZ.

Finally, ZZ and her band took the stage to screams and applause. 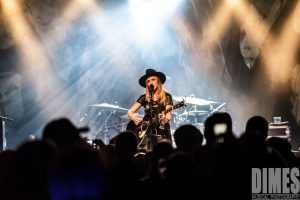 They started off Their set with my personal favorite song from the new album, “Let it Burn.” I was worried her voice wouldn’t sound as velvety and strong live as it does on the record, but my worry quickly diminished as she sang.

She dazzled us with her excellent harmonica skills, and you can tell she writes from the heart!   It was obvious that she loves sharing her craft to fans; it was evident as she belted out every song.

Filled with such emotion, I couldn’t help but sing along and sway with the magic she provided.

She played songs from the new album “Storm,” with “Ghost” and “Ride,” which the latter was featured in Disney/Pixar’s Cars 3. For such a petite lady, she sure has some amazing pipes.

ZZ played killer songs from her first album, including a fan favorite, and very soulful “Till the Casket Drops,” the blues inspired “Blue Eyes Blind,” and “Put the Gun Down.”

I feel so lucky to have the chance to watch this talent rise. She is a true performer and song writer, with songs that I believe are timeless and will live on. She respects the path she is on and paid homage to the ones that paved the road for her, with Etta James’ version of “Waiting for Charlie.”

ZZ Ward ended the night with the upbeat “365 Days” to a sold-out crowd showing their appreciation screaming back.