Trivium has done it again. They have delivered one epic packed album in What The Dead Men Say. This 10-song, 9th studio album, has everything you know and love about Trivium rolled into one technical, heavy metal, death metal, melodic, epic story.

Trivium is Matt Heafy (vocals, guitar), Corey Beaulieu (guitar), Paolo Gregoletto (bass) and Alex Bent (drums) and they have really fine-tuned their craft. What The Dead Men Say perfectly follows 2017’s The Sin and the Sentence, as both albums have a cinematic theme to it.  Both allow you to imagine the music in a soundtrack to an adventure or action-packed metal movie. Part of that is due to Matt taking you on a lyrical journey, and musically the band provides an adventure filled emotional journey with ups and downs and twists and turns.

I am going to break down the songs just a little and give you my take, but I strongly urge you to check out What The Dead Men Say for yourself. 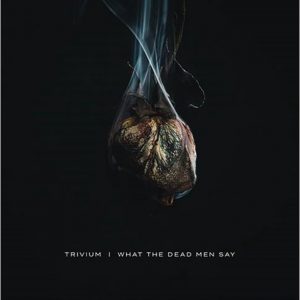 The album opens up with song titled “IX” which is very fitting, as this is their ninth studio album. This instrumental introduction is typically where the beginning credits would scroll on the screen of a movie; slowly introducing the characters for the adventure ahead. It’s quick, but beautifully done. It perfectly sets the stage for the epic-ness that follows.

“What The Dead Men Say,” is the album title track that flows well following IX. It starts with guitaring that gives you the feeling of anticipation, followed by the catchy melody. Heafy’s vocals go from rock operatic to a growl filled with determination. “What the Dead man say / It’s just between us / What the Dead man say / You can’t let go” chorus has that hook that will keep you holding onto every word of the story. It is at this point where the hero tells us the back story so that we can understand what lies ahead. The guitar riffs on this song are so precise, I can’t help but to play air guitar along.

“Catastrophist,” The first single released off this album is the epitome of a “Trivium” song. It showcases the range Trivium has.  It provides a slow heavy metal melody to a fast and technical machine, throw in catchy parts that grab hold of you.  This is where our hero voices his distaste for the villain. Whoever that villain may be, they are “the bringer of devastation” who “stole our innocence, we never had a chance.” Something needs to change and our hero is going to make sure of it.

“Amongst The Shadows and The Stones,” Well if this song doesn’t just punch you in the face, I don’t know what will. It starts off with Heafy screaming: “Bloody corpses broken bones reveal.” This song is definitely the fight song to get the soldiers pumped up and to remind them what they are fighting for: Fighting for justice. The trash metal undertones that get your heart pounding, the gritty growling and the fast drums… I can’t wait to see this song live. I can just picture the mosh pit. “Amongst The Shadows and The Stones” really does paint a picture of bodies moshing or getting ready for battle.

“Bleed Into Me.” I absolutely love the bass in this song.  It is the rhythm section that takes charge here. This song has all the great parts of a song that makes you want to sing along to. It’s beautiful.  It has parts that flow smoothly, followed by moments of sludge heavy-ness, and then goes back to a lighter melody, returning with riffing guitars. I don’t know how else to describe this song other than it just feels right. Seems like our hero is pleading to someone, baring their soul a little bit, creating a bit of vulnerability.

“The Defiant.” It is hard to choose a favorite among these songs, but this song really gets me in the feels; it is definitely one of my favorites on this album. Heafy’s vocal range and lyrics are packed with so much emotion. Pair that with the guitars that amplify that emotion, and the drums and bass that give you the foundation, this song kicks ass. “I stand in the defiance of your ways.” Seriously, the guitars put a smile on my face every time I listen listening to this song.  Our hero is finding his footing, discovering who they really are and they are not going to take shit from anyone. They are here to fight for what is right! That final scream by Heafy is absolutely magnificent.

“Sickness Unto You,” starts off with a bit of an intimate moment with Heafy’s vocals, and then moves into that operatic tone. The bass on this song is killer! This song is its own story. Musically, it seems like it is all over the place, but in a very deliberate way. It goes from a fast pace, to slow, to amazing guitar solos, back to fast. It is beautifully and technically done. Our hero seems to have conquered the villain…but is there a little bit of regret? Perhaps there is now an internal battle for our hero. But the hero came this far and did what they set out to do.

“Scattering The Ashes.” This song lyrically seems to be about the relationship between a father and son. It doesn’t seem like it was the most loving or nourishing of relationship; it appears to be somewhat troublesome. Distance has been put between these to, and the son is scattering the ashes. Feels like this is the closure the son needs for this chapter in his life.  Could it be that our hero was defying his father and the battle was their relationship the whole time? Musically, this song is set to be a solid hit.

“Bending the Arc to Fear.” Again, another beautiful and technical song with peaks and valleys and twists and turns, paired with the head banging heavy drums and bass. To me, this song has parallels to “Amongst the Shadows and the Stone.” “Bending the Arc to Fear,” has a similar feel of a song that would be used to pump up the troops and get that mosh pit moving, but in a stomping sort of fashion instead of an ‘all hell breaks loose’ sort of way.  I felt think our hero is seeing that there is a bigger problem; a bigger picture than what was originally seen.

“The Ones We Leave Behind,” is another favorite of mine on this release. This song is more upbeat…more of that pump up, in your face metal. Equipped with an on-point guitar solo, emotion filled vocals with the best mixture of clean and growls, this song has our hero realizing that we are all in this together, and together we can make a better tomorrow, and it is our duty to honor those we left behind. The way this song fades out is different from any other song on this album. Perfectly placed, this song closes out this journey for now, giving the story a “to be continued” ending.

I don’t know if Trivium’s goal was to portray this exact story, but it is what I felt while I listened to What The Dead Man Say. Trivium has perfected their craft. With each album, Trivium gives us a little bit more of who they are and what they are capable of. I enjoyed listening to this album in my car, through headphones while running on the treadmill, but I especially enjoyed it loud while writing this review. The epic-ness that this album provides was ‘music to my ears’… literally. I thoroughly enjoyed it and can’t wait to see what Trivium gives us next.