I was so excited for this show.  We were granted the interview with Erik of Watain, and I’d known this for weeks.  Being a fan of Watain, I wanted the interview to be flawless, plus…I have a burning desire to try and understand black metal in its entirety.  I don’t mean simply the music; I mean its full essence.   I love 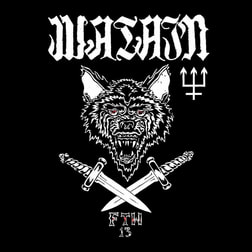 how I feel when I listen to black metal, but I must admit, sometimes feel like I am not worthy.  I know that sounds weird, but I feel like I can never fully understand it in its entirety.

Buying the traditional Voodoo Donuts seemed silly for Watain, so I settled on a nice box of hand-selected Moonstruck Chocolates, made right here in Oregon.

We have a rule at MIRP that we don’t get on a tour bus alone, and because the interview was so early in the day, and I wasn’t sure MIRP founder and photographer Jerimia would be there in time, I made arrangements with the venue to conduct the interview inside.  My contact at Portland’s Hawthorne Theater was incredibly accommodating, and I felt a bit relieved.

Jerimia arrived just in time, and I emailed the tour manager that we were in the venue.  We were shown to the booth where the tour manager sat.  I said, “We are from MIRP and are here for an interview.”  He laughed, and said, “With me?  It isn’t going to be very exciting!”

He had us sit, and said he would fetch Erik when Watain was done with sound their check.  Sitting there, listening to sound check was awesome; it’s one of my favorite parts of this job. I read over the questions quickly, and sat there… nervously awaiting Erik, who was high on my list of “must have” interviews.

He came through the door accompanied by the tour manager, and introductions were made.  He sat on the opposite side of us, and I quickly felt ridiculous for having a box of chocolate as a gift.We exchanged small talk for a moment and then proceeded with the interview. It was fascinating, revealing, and thrilling.

He was soft spoken, with really kind blue eyes, andWe talked about the essence of black metal, which countries they were most free to do as they wanted on stage, how much of an impact Metallica had on him, and how their belief system is pivotal to Watain.  After we finished the interview, Jerimia and I had a few hours to kill, so we did.

Just in time for Degial, we positioned ourselves front row, stage right.  The buzz in the venue was that real animal blood would be used, and, in fact, there were two signs posted on the entry doors that read: “No animal parts allowed in the venue,” and “Real animal blood used tonight.”

The first band up was Degial.  Degial is band that hails from the same town as Watain (Uppsala, Sweden).  Their music was fast-paced, and they were a great opener for the night.  I wondered if there was some relationship between Watain and Degail since they came from the same city.  Again, they were good, but not quite a seasoned as a band like Watain.

Next up was the controversial Destroyer 666 from Australia.  Labeled as racists, misogynists, and more, this was a band that I’d never seen, and felt that I should see at least once, as a music journalist.  In my effort to not be judgmental when it comes to music, I watched… I watched for a few minutes, and then went to explore the merch, food, and visit with others who were not watching…and there were quite a few.  Their music was alright, but nothing spectacular.  And, I guess they were memorable only because it is so rare to see them live.  I left because they were mediocre, and I don’t support misogyny or racism.

The venue was a buzz with preparations for Watain.  We were given a heads up by the staff at the venue that we might want to consider not standing in the front row…that (insert specifics regarding timing and quantity of blood used) would occur.  I’m leaving it out here on purpose, so that no secrets are revealed for future shows on this tour.  Jerimia and I discussed it, and decided that, yeah, we wanted to experience it all.  All of it.   So, we stood in the front.  After all, we’d just done the interview and I now had a better understanding of what Watain was about…more than just the music.

Being vegetarian and an animal lover for many years, I had a moment of feeling like support for this live show might be wrong, but then I decided that that thought was wrong.  I’ll tell you why: My immediate reaction was that it was wrong for them to use real animal blood, and I was consumed with thoughts about my judgement about it.  Just as I had a handle on how I felt, I remembered the interview and hearing Erik passionately talk about Watian and their belief system.  To me, from that conversation, it appeared that in some ways, Watain is a way of life.  As I struggled for a solid stance in my mind, it hit me!  I realized that in the hours between the interview and the show, at dinner, Jerimia ate a hamburger.  Both animals died.  So what is the difference if it is for a hamburger or for ceremony?  Who am I to judge what parts of the animal are used for what purpose?

I stood stage right, front row, with a quick exit strategy for the timed bloodbath.  The members of Watain came out amidst thick fog and red lights, and the atmospheric, dark music began.  I was excited.

That was until the smell hit me.

At first, I thought the horrible smell was the fog, but it soon became apparent that it was a putrid smell of death.  Once I realized what I was smelling, I looked for Jerimia, who was in the photo pit, right up against the stage.

A girl pushed past me with her hands to her mouth, as if she was vomiting.  A few people held their noses.  I wasn’t sure what to do.

After a few songs, Jerimia appeared next to me, and we gave each other a look of confusion. Instinctually, we both headed for the back of the venue without saying a word to each other, and gasped when the fresh air hit our nostrils.  We quickly discussed what to do, and decided that the smell was too strong for us, and we ventured outside.

We enjoyed the rest of Watain through the venue walls and the fresh Oregon air.  However, during the ride home, and the subsequent crawling into our respective beds, we both reported that the smell stayed in our nose for hours…much akin to when you inhale too much bleach.

I membered that the last time I saw Watain in 2012.  They were more heavily restricted on what they could use in their ceremonial performance at that same venue.  I remembered that  during my interview with another band the day after Watain played that year, I smelled something so disgusting that I had to see what it was.  I searched around and found myself by a big dumpster.  Against my better judgement, I opened the  dumpster, and found the sun baked, rotting remains of what could not be used.  I HAD smelled that smell before.

I like Watain’s music, and respect that they have a spiritual belief system so strong, that it unifies the three core members.  I like how I feel when I listen to them.  There is beauty in the darkness, and an element of magic in the mystique.  I feel proud that the majority of the questions I asked were not routine, and that Erik was so forthcoming and honest.

I stepped out of the venue during Destroyer 666 because I have a problem with misogyny and racism, and felt just fine with my decision to do so.  I stepped out of the venue during Watain because I couldn’t stand the smell…not that I had a problem with their spiritual belief system or use of blood.  Look, I am vegetarian and an animal lover.  I was raised Lutheran.  I’ve read the bible through with an emphasis on the book of  Leviticus.  I was raised as a hunter and fisherman.  I am very aware of the world and the seemingly unpleasant use of animals that I don’t personally support in my life.  I’m vegetarian and don’t eat meat, but I leave your personal decision up to you.   Who am I to decide which animals are OK to kill, and for what.  Who am I to decide what parts become food, shoes, clothing, or sacrificial fluid?  Believe me, I’ve spent hours considering how I feel about this.  I don’t like it, but am dumbfounded by the hypocrisy that surrounds what we consider appropriate (eating a hamburger) and what we don’t (blood sacrifice).  Seriously, 95% of the people in attendance likely had meat before they came.

While I will likely never grasp the entirety of the essence of Watain, through their live performance, they provoked me to understand that I have a stand to make.