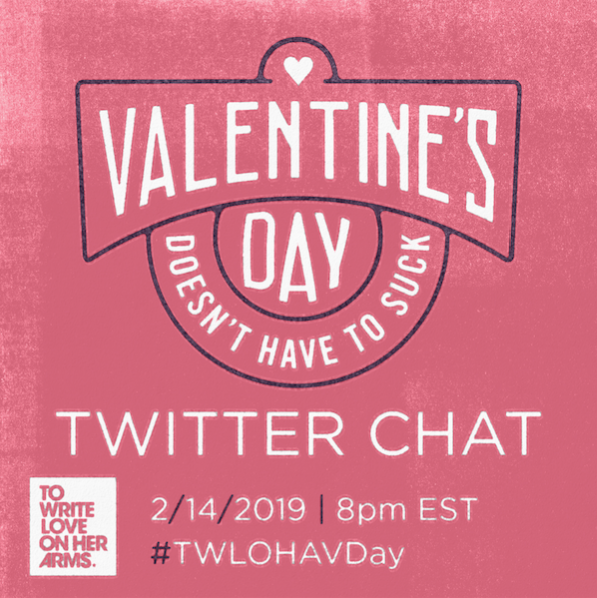 To Write Love on Her Arms (TWLOHA) has announced its 12th Annual “Valentine’s Day Doesn’t Have To Suck” live chat on Thursday, February 14th, at 8PM EST on @TWLOHA’s Twitter page. People can participate in the chat, led by TWLOHA founder Jamie Tworkowski, by logging on to Twitter and using #TWLOHAVDay to follow along and ask questions that will be answered by Jamie and other members of the TWLOHA team. The organization will also be broadcasting a portion of the chat live on their Facebook page (Facebook.com/ToWriteLoveonHerArms) and via the launch of their channel on Twitch (twitch.tv/twloha) for an hour starting at 8:30 PM EST.

Additionally, as part of their “Valentine’s Day Doesn’t Have to Suck” chat, TWLOHA is asking content streamers to help them raise money and awareness for mental health. From Monday, February 11 to Sunday, February 17, streamers are encouraged to bring a conversation about hope and love to their communities and to help raise $10,000 to support the organization’s mission. Streamers can set up their fundraisers here: https://bit.ly/2HT8mIR.

“We know that Valentine’s Day can be a rough and often lonely day for so many folks – that’s why we want to remind people that their love matters and that they matter,” says COO Lindsay Kolsh. “Our chat is an invitation to talk about these uncomfortable feelings but to also remind those struggling that they are not alone during this holiday or any other days.”

To Write Love on Her Arms is a nonprofit dedicated to presenting hope and finding help for people struggling with depression, addiction, self-injury, and suicide. It exists to encourage, inform, inspire, and also to invest directly into treatment and recovery. Since its start in 2006, TWLOHA has donated over $2.3 million directly into treatment and recovery and answered over 200,000 messages from over 100 countries.

This past September TWLOHA wrapped their 7th annual campaign to honor World Suicide Prevention Day (WSPD) and National Suicide Prevention Week (NSPW). With the help of supporters from around the world, the organization was able to raise over $200k for treatment and recovery, more than doubling their initial goal of $100k. Over 3600 people donated to the “Tomorrow Needs You” campaign, in addition to the sale of 4,655 World Suicide Prevention Day packs. The money raised will help sponsor nearly 4000 counseling sessions and connect 55,000 people to local mental health resources.

As part of the campaign, TWLOHA shared an inspiring video featuring actors Chris Sullivan (from This Is Us) and Jaina Lee Ortiz (from Station 19), country music star Hunter Hayes, who raised $25,000, writer/artist Morgan Harper Nichols, and singer/songwriter Matt Wertz, along with a number of clips submitted by TWLOHA supporters from around the world. To watch the video, please visit: youtu.be/aEzUMnBHHK0.

For more information on To Write Love on Her Arms, please visit: www.twloha.com