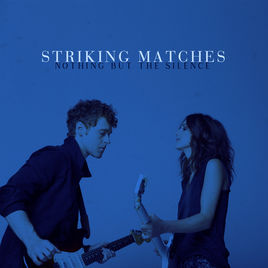 On Sept. 17, Striking Matches (Sarah Zimmerman and Justin Davis) released an all-guitar version of Kanye’s “Gold Digger”. Watch the video (directed by Josh Kranich) in the player below or follow this link.

“We met in guitar class” is not a thing many people can say… but Sarah Zimmermann and Justin Davis performed together for the first time on the very same day they met… in guitar class.

Fast forward, following the international success of the Striking Matches’ album Nothing But The Silence, produced by T-Bone Burnett, and 9 songs on TV’s “Nashville”, Davis and Zimmermann have teamed up with Kennedy Karate (BØRNS, Silver Sun Pickups) for a new LP yet to be released. The forthcoming album is what the band calls “blues-pop”– an amalgamation of their blues and roots based guitar riffs, combined with pop melodies. Check out the check out the EPs Shameless and Retrograde and stay tuned for new music being released this Fall.

Striking Matches just wrapped a UK Tour with TV’s “Nashville” star Clare Bowen and are starting the second leg of their headlining US Tour tonight at the Satellite in Los Angeles. Check out remaining tour dates below.