What is better than summer weather, tacos, beer, music, and Lucha Libre wrestling?  Nothing!  When the Sabroso Festival came to Portland on May 13th, we had unusually hot weather. Our very white, virginal Oregonian skin was seeing the sun for the first time in nearly a year, and by the end of the night, our white pasty skin turned a nice, very sensitive shade of pink.

It was a very well thought out and laid out festival with an offering of bands that was both nostalgic and thrilling.  The over 100 beer options saw lines that were manageable, and the food carts were well thought out, although mid-day the lines were quite long (but, that long wait was worth the frustration once you tasted the excellent food.)

There were stand out moments for me that I want to get out of the way.  First, the staff, security, and venue workers, in nearly every case, were singing along with the bands.  Second, during Pennywise, there were five guys, likely in their late 40s, that obviously had loved Pennywise in their youth.  They were dancing, and jumping, and screaming the lyrics, high fiving each other, and it was awesome to see the teenager come alive in these middle-aged men.

There was just one stage, with the grounds split by VIP and non-VIP areas. Los King Fu Monkeys were up first and while most of us had never heard of them, they were truly awesome.  From Tijuana, Mexico, this rock band came with the coolness of Clutch or 36 Crazyfists, with a bit of ska, topped off with a horn section.  They showed us how much they loved performing, and they were absolutely the right fit to start off this festival.

Between sets there was, of course, tacos and beer, but also there was Lucha Libre Wrestlers.  Being a girl, and not having seen this type of wrestling before, I found it to be ridiculous and glorious.  AND, the best part, was as you’d head to the stage to catch the next band, the foes (I could have said faux here, but chose not too), would walk together laughing all of the way back to the back-stage area.

San Diego’s Unwritten Law performed next in a half hour set of alternative/punk infused tunes; powerful in their presentation and passionate in their sound, they kept the pace of the festival, adding a bit of what would be increased intensity that lasted into the night, culminating in the climax that would be The Offspring.

Lit was my favorite of the night.  I was most looking forward to them and they absolutely didn’t disappoint me.  They began their set with Tom Petty’s 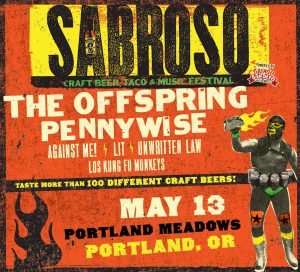 and followed it up with “Four,” “Easy,” “Zip-Lock,” “Miserable,” “The Last Time Again,” “Good Problem,” “Someday,”  “Something to Someone,” and “My Own Worst Enemy.” I know I wasn’t the only one enjoying them as the crowd around me sang along, reliving the easier time that was the 90s.

Florida natives, Against Me! took the stage next and each member looked so comfortable and at ease on stage; this was truly their happy place. Against Me! put on a performance that would rival their best show over the years.   They played their punk, hard and heavy hits “I Was a Teenage Anarchist,” “Pints of Guinness Make You Strong,” and “Black Me Out.” The sun was starting to take its toll and I fought others towards the back for mere inches of shade.

The mighty Pennywise was next.  They are a band who have stayed true to their message over the years.  Hardcore punk at its finest, they still talk about politics, being yourself, and encourage you to throw up your middle finger to anyone who tries to stand in your way.  They played their classics, and this is where I fell in love with the men directly in front of me. They looked like doctors or lawyers, and upon the first chord, they turned into to angst ridden teens during Pennywise’s set.  Their fists pumped with integrity in the air, they danced about, and one of them, the one who was obviously THE main Pennywise fan, looked to his middle-aged comrades and pointed at the pit.  They shook their head no, and he gave them the finger with a devilish smile.  They all sort of huddled together in disbelief and it was a fine moment to see the transformation of man to teen…the anarchist come out of the law-abiding tax payer.  It was priceless, and Pennywise ruled the night.

Sunburned, tired, drunk (not us, we were working) and full…many people sat on the grass between the change over from Pennywise to The Offspring.  Once The Offspring took the stage, the sun stroked, tired crowd energized.  Everyone was up on their feet, and as dusk approached, the sound level increased.  Not from the soundboard, but from everyone in attendance who sang along with the familiar and fun hits the The Offspring provided.  Their setlist was as follows: “Americana,” “All I Want,” “Come Out and Play,” “Coming for You,” “Smash,” “Staring at the Sun,” “Want You Bad,” “Mota,” “Bad Habit,” “Gotta Get Away,” “Gone Away,” Why Don’t You Get a Job?” “You’re Gonna Go Far Kid,” “Can’t Get My Head Around You,” “Pretty Fly (For a White Guy), “The Kids Aren’t Alright,” and “Self Esteem.”

A very well thought out and organized festival, with Van’s Warped tour ending it’s run, the inventors of Sambroso should seriously consider doing this festival every year, and bigger and better.  We are hungry for it (although we left very full from the delicious food.)