By Susan Welch|2018-07-23T03:17:34+00:00July 19th, 2018|Featured, Show Reviews|0 Comments
It was a hot day in Ridgefield, Washington and not just because of the temperature; Miami, Florida native Pitbull was in town! Just like I imagined, Pitbull was here to bring the party. The Cowlitz Ballroom at the beautiful Ilani Casino, was packed with approximately 2,500 screaming fans.  A quick little side note: the security and Ilani employees (and Tom who sort of runs the place) treated everyone very well and with smiles.The staff at Ilani made us feel like a guest and that added to the overall experience. To get the packed house ready for the show, DJ Denver played songs that made us shake our collective booties.  DJ Denver periodically spoke in Spanish asking occasionally where his Puerto Ricans were? Venezuelans? Mexicans? Spaniards? Peruvians? Argentinians? Some in the crowd represented their country of origin by waving appropriate country flags. This was truly a Mr. Worldwide crowd.
With the highly anticipated intro video that started the set, Pitbull the the stage. Surround ed by six beautiful back up dancers, Mr. Worldwide started with the perfect song: “Don’t Stop The Party.” Just to give you an idea of the maybe hardest working man in the industry, Pitbull (his real name is Armando Christian Perez) has provided 10 studio albums since 2004.

Even if you don’t know for sure, there is no way you haven’t heard his songs!   Pitbull’s songs are featured on the radio, in the grocery store, in commercials, everywhere really. Also, if you have ever taken a Zumba class (I do every Saturday morning) you are absolutely very familiar with his music.  Likely because Mr. Worldwide songs have  that perfect rhythm that makes you get up and dance.

He played one of his biggest hits, “I Know You Want Me” from the 2007 album Boatlift, and another dance worthy oldie but goodie “Bon Bon,” from the 2010 album Armando. Pitbull talked a little bit at one point about the important women in his life and that all women are true nurtures that are always a couple steps ahead of men. He went on to say that women work so hard and sometimes they just need to have a night out with the girls!  He then offered up himself as a ‘hall pass’ and segued into the song “Hotel Room Service” from the 2011 album Planet Pit. Mr. Worldwide also showed us his serious side by talking about how we are all one people, no matter what our background or beliefs; that there is a universal language of music. 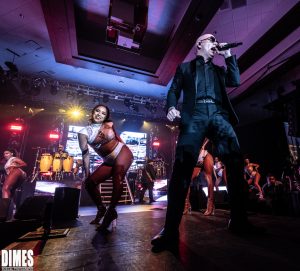 It was amazing to hear and feel that unity, a unity that is obvious by the songs that he sings, even if some of his songs are just straight up “shake that ass” music.  Pitbull played one of my favorite songs from the 2014 Globalization album “Fireball,” which just has that Latin, electric feel throughout the entire song.  He put on a great show and the dancers where amazing.  The show was high energy from beginning to end!  One thing that I found sad was how everyone had their cell phones in the air, no doubt to record the show to enjoy for many hours in the future, but doing so resulted in not fully enjoying the experience live.  I suppose everyone enjoys things differently.  I know I enjoyed the show with my cell phone securely placed in my pocket!  If you didn’t leave this show in a good mood, you should check yourself!