PAPA ROACH challenging fans to “Feel Like Home” in Quarantine 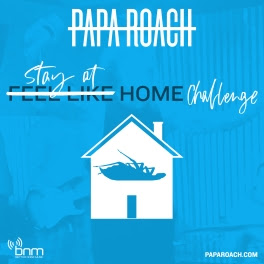 NEW YORK, NY (April 29, 2020) — Today, PAPA ROACH releases the official video for the track “Feel Like Home.” The minimalistic, high-energy video was filmed at home, under quarantine, providing a rare and very entertaining look into the band members’ and their family at home.

The band explains “We’re all home, in quarantine, and decided to try and entertain our families a little bit with one of our favorite songs from the record – we hope it brings a little joy and positivity. Really looking forward to seeing people around the world trying their own! “

And with that comment – Papa Roach and Better Noise Music are launching the #FEELLIKEHOMECHALLENGE, encouraging fans anywhere in the world to create their own version of the video, from home, for the opportunity at several prizes, including a Grand Prize of $1,200.  All entries are to be submitted by Sunday May 31st,  at which point band will review all entries and choose a winner with 2 runner up prizes, along with prizing for 10 submissions selected at random on June 8, 2020 Anyone can enter anywhere in the world 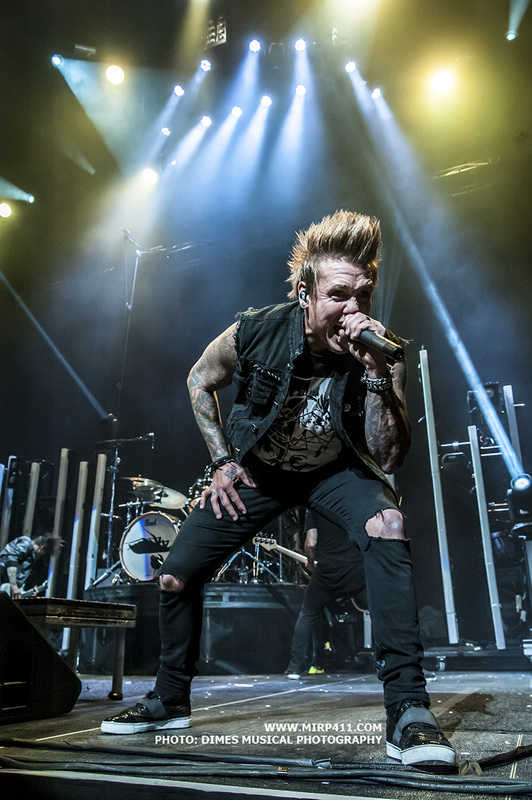 The figures tell their own story, and time, as ever, is the real test – Papa Roach are a rare breed of their own. Sure, you might have hits early on in your career, but what do you do after the initial heat cools off, and the spotlight moves to someone else? This leads many to mistake the game of rock as a sprint. Many lose their nerve, flail blindly and shape their sound to whatever’s trending. Many by default fall into their catalogue and continue touring as “heritage” acts, or museum pieces performing to an ever-dwindling crowd. However, there’s the band that holds their mettle, that takes the time to grow, that uses those moments when fame’s fickle finger is pointing elsewhere to take risks and to try new things. This is the band that comes out the other end making the best music of their career, ready to change the world’s perception of them, and Papa Roach has done exactly that. As frontman Jacoby Shaddix puts it, “We were these young dudes making this music that was visceral, raw, angsty and unapologetic. Then we got tattered up by the industry a bit – but that was just the beginning of our evolution”

Before Nu-Metal’s body was even cold, Papa Roach had left it behind and weren’t even going to consider looking back. “We felt like, let’s discover what we can be,” remembers Shaddix. The albums that followed we’re a case study in sonic exploration, showcasing the group’s return to heavy rock and connecting with a purer spirit. This influenced a run of titles – Getting Away With Murder, The Paramour Sessions, Metamorphosis, F.E.A.R. – that saw Papa Roach earn back their bragging rights, that proved they had an identity of their own, that they were a band with a future with a destiny that was in their own hands.

“We fell in love with classic rock, and I wanted to prove I was an avowed rock singer,” laughs Shaddix. “But after a while, it felt like we were boxing ourselves in again.” To keep things fresh and alive, another reinvention was necessary. As bassist Tobin Esperance puts it, “We wanted a new chapter in our career. We wanted to carve a new path, be ‘Papa Roach’, true to form.”

Who Do You Trust? released on January 18, 2019 is an album that aims wildly and from the hip, but always hits its target with the exhilaratingly chaotic “Renegade Music,” and the uplifting chorus of “Elevate,” a song which also sees Shaddix reconnect with his swaggering rap MC side. Tracks like “I Suffer Well” and “Maniac” tap into pure, raw, punk emotion, but leaven that spirit with melody and precision, delivering something uniquely addictive.

“There’s a lot more ‘major key’ on this record,” says Shaddix. “Like rays of sunshine coming through the music, on songs like “Come Around,” “Feel Like Home,” and “Problems” are songs that are fuckin’ bangers.” But there’s depth beyond that energy and velocity, too. Shaddix says that the album is “a mental health record – we’re at a point where we can be vulnerable and honest about our lives and open up.” That honesty shapes and gives power to songs that are emotional and soulful, songs built for the wide-open spaces this in-demand festival act make their own.

Two young producers, Nicholas Furlong and Colin Brittain, began working with Papa Roach on the sessions that would become Crooked Teeth (2017). “We got in the studio one day, and we wrote a song, and it was so fun and the chemistry was great, and we just said, ‘if we just do it twelve more times, we’ll have a record’,” remembers Esperance. And that’s pretty much what they did, taking a leap of faith that delivered Crooked Teeth, and a new incarnation of Papa Roach that tapped into their earlier identities and spun them into a new sound that embraced both the anthemic, rousing rock band they had become, and the raw, ratty and unpredictable beasts they once were, mixing polish and precision with something more animal and inspired.

Crooked Teeth (2017) marked a rebirth for the band, commercially and creatively, staking out new frontiers for their music, new spaces for their sound. Who Do You Trust? redoubles that effort, Furlong and Brittain re-joining the group to produce another step towards a defiant future for Papa Roach, breaking down every wall that might hold them into a single genre, and just daring lightning to strike twice. Its twelve tracks prowl the range of heavy rock as Papa Roach have defined it, but every razor-edged hook and neck-breaking twist underscores the only rule this band obey now: that there are no rules. “Crooked Teeth taught us that the more we go out and get adventurous with our music, as long as its from an honest place, we can do it,” says Shaddix. Who Do You Trust?, he says, snatches that smash’n’grab ethos and runs with it. “This record is about extremes. The heavy is more heavy. The pop is more pop. The hip-hop is mad hip-hop. The punk-rock is just insanely punk. But it all makes sense to us.”

But while there might be a sense of darkness that keeps Papa Roach’s feet on the ground, the mood within the band is heady, one of excitement and hunger. “Some bands have animosity and drama,” says Esperance. “We just don’t have that. We’re just up for the challenge of keeping everything fresh and new. ‘Crooked Teeth’ was like our shot at proving everyone wrong, to have fun and make people happy. It worked! So now we feel like a well-oiled machine.”

“I don’t feel like we’ve been doing this for twenty years,” nods Shaddix, restless, and clearly ready to get back out onstage and start fucking shit up. “We have that same intensity we always had, that makes us wanna jump out of our skins the minute the drums start.”