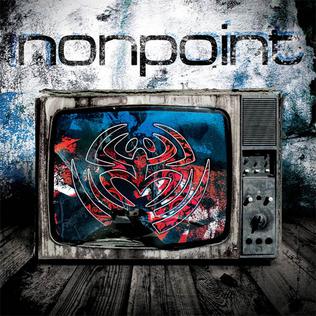 Nonpoint is a heavy metal band that has been around since 1994. The band currently consist of vocalist Elias Soriano, guitarists Rasheed Thomas and Dave Lizzio, bassist Adam Woloszyn, and drummer Robb Rivera. They have had their own headlining tours, and have opened for acts such as Mudvayne, Drowning Pool, Sevendust, and Stone Sour. I started liking this band when I saw them open up for HELLYEAH at the Roseland Theater. Then, I saw them headline at Hawthorne, and at that show, it was so cool — they had the fans pick the playlist for that night by writing their favorite song on a piece of paper and collected in a box at their merch table. I’ve never seen a band do that before but it was awesome, and showed that they knew their material well, and were up for anything. Live, each member looks like they are having the time of their life!

Nonpoint released their self titled album on October 9, 2012. This is the bands ninth studio album to date.

It starts off with a song that will hit you so hard, you’ll be pumped and primed for the next song. This is how every cd should start off! “Lights, Camera, Action” is the perfect intro to not only the cd, but for a live show. I swear you can hear the echo of Elias’ vocals in a large stadium. If this doesn’t get the crowd going, I don’t know what will. They follow up with a couple of classic Nonpoint songs – great melodies and catchy choruses with heavy moments in between. “Left for You” is their first single off this cd and it was a great selection. It is a perfect “difficult relationship” song that I believe anyone who has ever been in love in a difficult relationship can relate to. “International Crisis” and “Pandora’s Box” have just the right amount of heavy to easily get air time on the radio. The fast and heavy F-you song “Temper” is a great song! My personal favorite song, however, is “Ashes.” It starts with a Spanish-style guitar, and Elias’ smooth vocals — then it hits you in the gut and invokes a primal urge to scream. This cd showcases Nonpoint’s heavier side, with more screaming vocals, heavy guitars, and head banging drum beats. If this is your first time hearing of Nonpoint, first off… where have you been?! Second, you’re in for a treat with this cd. I highly recommend it. – SS11