Mushroomhead, Vyces, Gabriel and the Apocalypse, Align the Tide – May 18, 2018 – Portland, Oregon – The Analog 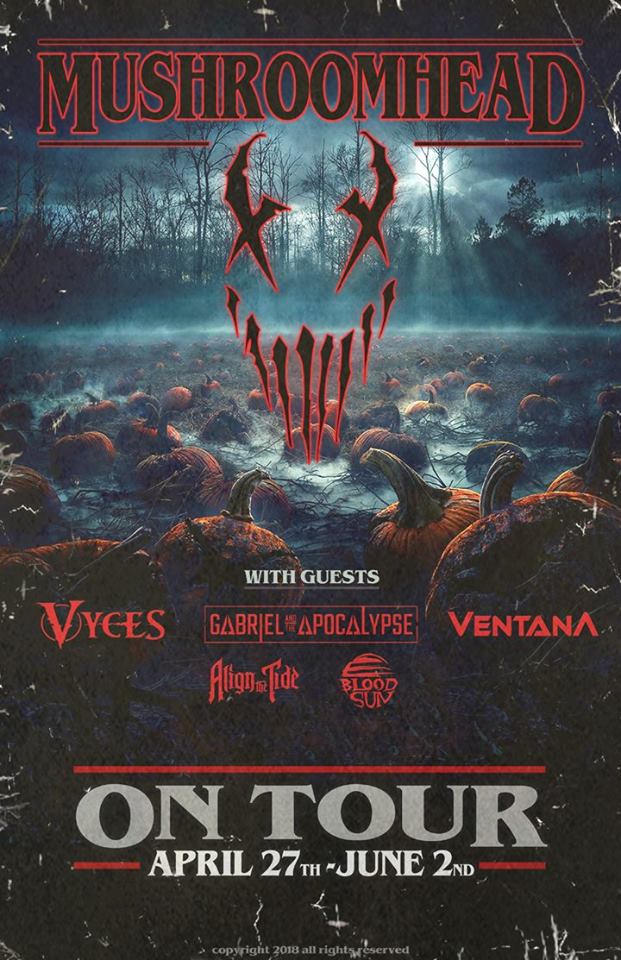 After some controversy, and a quick ownership change, the Analog (or new unnamed venue) held this long-awaited show.  The controversy of the quick ownership change surrounded some bad yelp reviews and Facebook posts that made an accusation, locals reacted, and the show that was scheduled for the downstairs stage was cancelled.  That left room for all of us attending Mushroomhead and Vyces to get a breather and a beverage during the very intimate and hot setting upstairs where the show took place.

We had an interview with Dave (vocals) and Russ (drums) of Vyces, so we missed the first band, and caught the last song of the second band.  We stood right in front of the stage (which is barely six inches above the ground, sans a barricade.  It’s always so weird to be so close that you are standing face to face and can feel the pelting of saliva as they sing, or the droplets of sweat as the band performs.  But, when you love a band like Vyces and Mushroomhead, it can also be a pleasure.

Vyces are a band that I discovered while I was in South Africa and had never seen them live.  Not only were they amazingly nice guys, their performance was full of passion and fervor.  The guitarist had a broken foot or let (had a cast) and sat for the performance, that is until the last song, when he climbed up on the cloaked Mushroomhead percussion set on stage right and braced himself against the monitor.  The drummer was absolutely amazing, and the vocals were so passionate you could feel every emotion he put out.  Vyces is a band that gets compared to Chevelle and Killswitch Engage, but I didn’t see that at all.  In this day and age where there is a blur of copycat bands, Vyces stand out as able to do something different.  They were the start of the show for me.

Mushroomhead.  Well, sort of.  Without Waylon and Tommy, it just didn’t feel the same. The water splash on the drums was less than normal, and the stage was way too small for them.  The sound however, was classic Mushroomhead and the set was good.  Wearing their trademark masks masked the missing members to the light Mushroomhead fans, but…to those of us who know, there was a void in both the quality of the music and the showmanship.  Mushroomhead are a band that need room to perform, and I think we all wish they would go back to the classic lineup we all loved so much.  The choice of venues was unfortunate, but at least they didn’t play downstairs!