It felt like the 1980s again…not quite Heavy Metal Parking Lot 1980s, but 80s all the same.  The venue, the Memorial Coliseum, brought back so many amazing memories, seeing arena worthy bands of my youth…back when life was simpler…when the biggest decision I had to make was what to wear to school the next day, and wondering if my crush of the week liked me back. 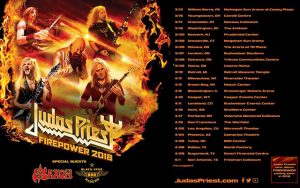 I remember the first time I heard Judas Priest.  It was a KGON announcement for the June 21, 1980 British Steel tour in Portland, Oregon.  I was standing in the laundry room of my childhood house, and I stopped cold.  What was I hearing?  I’d never heard anything like it.  It was Sad Wings of Destiny’s “The Ripper.”  Now, I’d just made the leap from Leif Garret to Boston to Van Halen, and had just discovered AC/DC, but none of it was like what I was hearing.  It was a defining moment in my life-long love affair with metal.

Too young to go to the show, I waited patiently by my radio, with a fresh cassette inside, waiting to push play when that song came back on.  Fast forward a year (1981), and my parents hesitantly let me attend Motorhead and Ozzy Osbourne with my best friend, her older brother, and his friends.  Third row, Paramount Theater, Portland, Oregon…Randy Rhoads…Rudy Sarzo side…I was forever in love with live music.

In 1983 I worked at Portland’s Pine Street Theater and was immersed in the local Portland metal scene, tape trading, and a love affair with musicians; it was the 80s after all.  Someone gave me Judas Priest’s “Unleashed in the East,” Saxon’s “Denim and Leather,” and Warlord’s “Deliver Us.”  I played them until they were unplayable.  I was so taken by Saxon, that I had the Saxon “S” tattooed on my body at 17.  It was 1983 when tattoos were not mainstream.

My friend and I were in downtown Portland and got the tattoos on a whim.  We lie

d about our age, and I remember enjoying this new feeling of being “bad,” “unique,” “metal”!   The “S” was tattooed right where the belt line of your jeans hit your body…you know those snazzy San Francisco Riding Gear jeans that are now called Mom Jeans.  Well, I had forgotten about it, (mostly because I personally couldn’t see it), until that one evening when I was doing the dishes.  I had my sweet jeans on with a cropped t-shirt. My dad came in and yelped, “Come here right now Susan.”  Oh no, that tone always meant I was in trouble.  He didn’t call me by my nick name or the more common “Susie,” this was a stern “SUSAN.”  Knowing he meant business, I slowly went to him, a little perplexed by his tone, totally unaware of the situation.  He grabbed my belt loop, licked his fingers, and trie

d with all of his might to rub off the tattoo from my skin.  “That better wash off,” he opined.  Well, that was the end of my freedom for a while.

Now 18 and full of shit, I moved out of the house, found a boyfriend who loved metal as much as me, and well, the rest is history.  From that point on, whenever Judas Priest was in town, I was there.

So, last night, at the Memorial Coliseum, I was flooded with nostalgia, and beyond excited to see two bands that had such an impact on my life and taste in music.

Black Star Rising was up first, and I was unfamiliar with them.  So, of course, I spent an hour or so the night before perusing YouTube videos, and their discography, taking note of how much they sound like Thin Lizzy.  Not doing my due diligence, I didn’t check the members or read Wikipedia.  To my surprise, at the end of their set, they announced the Thin Lizzy connection.  “Black Star Riders began when members of the most recent line-up of Thin Lizzydecided to record new material, but chose not to release it under the Thin Lizzy nam

e. While Thin Lizzy will continue on an occasional basis, Black Star Riders is a full-time band” – Wikipedia

They were solid, good, relatively entertaining, but they were really just filling time, as we anxiously awaited Saxon and Priest.

Biff Byford and his band Saxon hit the stage to shrieks of excitement.  While he has obviously aged in the 40-year span of his career, the only way you’d know that for sure was the fact that his jumps started from a little lower point, his stride a little slower, but his voice was nothing but perfection.

Playing a combination of old and new songs, my only disappointment was purely personal; they cut Princess of the Night short, and didn’t play my favorite Saxon song, “And the Band Played On.”  As th

ey played, I smiled, remember everyone saying, “You’re going to regret getting that tattoo when you are older.”  Well, I’m older, and, nope…don’t regret a thing!  Saxon were awesome and exceeded my expectations.  They opened the set with Olympus Rising prior to taking the stage.  They followed it up with a fast-paced set consisting of:  Thunderbolt, Power and the Glory, The Secret of Flight, Motorcycle Man, Nosferatu, Dallas 1 PM, They Played Rock and Roll, fan favorites: Denim and Leather, Princess of the Night, Wheels of Steel, and ending their set with Sons of Odin and Heavy Metal Thunder.

Standing next to my left was a metal head and his nicely dressed girl.  To my right was

a new friend who loved Priest and loved the seat next to me that was reserved for Jerimia who was taking photos.  Behind me were two guys that were also there just to see Priest.   I was in middle, and we all bragged about our Judas Priest pedigrees.

The giant banner dropped and Judas Priest took the stage.  I was pleased that the two new guitarists did not try to mimic KK and Glenn’s synchronization, rather, they just played the music.  Rob Halford, looking eclectic in his bedazzled robe, silver pants, and evening slippers, slowly, but deliberately, waked across the stage, singing new and old songs with the intensity of what you’d expect on a perfect night.  The behemoth of a screen behind them often displayed the album of the song they were going to play next.  Of course, the beloved old songs received the loudest response, but the new songs were just as groove-oriented and good, just not as familiar.
The highlight of the night was when they played “Grinder.”  As the familiar song star

ted, the guy to my right tapped me on the shoulder and gave me a high five.  Just as that happened, the guy to my left turned to me and smiled and held out his hand to give a high five, but instead intertwined his fingers in mine and shook our married fists with a giant smile of happiness.

I knew that we were all one at this moment.  Knowing the nuances and every twist and turn of the familiar songs, we collectively banged our heads to the band that made us love metal.

There was a touching moment when Glen Tipton came out for Breaking the Law and stayed for a song or two.  The applause was deafening, as the beloved guitarist, who now suffers from Parkinson’s disease, stood still with guitar in hand.  The replacement guitarists vanished from the stage, out of our sight, but still obviously playing… allowing Mr. Tipton his rightful applause and adoration.