I had the pleasure of sitting down with all five members of Eyes of Arcane just after they opened up for Born of Osiris in Portland.  This interview is late in its release because I have struggled with this audio.  I’ve edited it inside and out, backwards and forwards to salvage it.  It’s a great interview…but with wind.  There are parts that are illegible, but they last mere seconds.  Mid way, there is a brief interruption from a former member of Black and Blue who honked and yelled at the group of us sitting in the parking lot outside the venue, but it’s funny.  To maintain the integrity of the interview I left the “windy” parts; it just didn’t feel right to edit them out because what they had to say was often a door into what makes Eyes of Arcane. 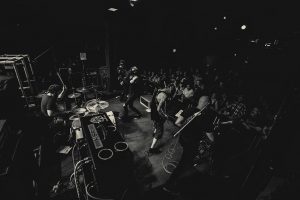