I have been looking forward to hearing “No Halos in Hell.”  Cyhra’s first album, “Letters to Myself” was a special companion during healing from the death of my father and the dissolution of my marriage.

Wondering what raw human experience would inspire them this time, I prepared myself for something significant.  “No Halos in Hell is a fantastic next step from “Letters to Myself.”

This second release has the same “sound” as “Letters to Myself”; what I mean by that is that

you know it’s Cyhra…only it’s better.  The men of Cyhra are more vulnerable, and with this release, they offer mankind a voice and a friend.  The quality is striking; the composition, the hidden elements that you can only properly hear with headphones, the use of enhancements that make it full and voluptuous, all help to make it spectacular.  The magic between all members is clear, yet the distinct sound of Jesper and Jake E., that was so prominent on “Letters to Myself,” remains.   All members shine throughout the release, but it is the quality of Jake E.’s voice that has the most immediate impact.

Pure notes, incredible range, mellifluous (it means having a pleasant and fluid sound), the texture of Jake E.’s voice penetrates you somehow.  One of the most believable vocalists in heavier music today, Jake E. allows you to believe him.

Most songs are honest, raw, and human.  Many are intense.  All have catchy choruses and exquisite guitar work and composition.

The songs that had the most impact for me were:

Out of My Life.  This is the perfect song to start this album, and one that will stay with you long after you’ve turned the music off.  There is so much going on behind the main melody it is the perfect conduit between the two releases.  I was left with the feeling of an obviously hard decision, but the right one.  When you love someone so much, but they are wrong for you.  You know you have to learn to love yourself more if you are going to survive.  It’s a tale of finally figuring out your worth. I found myself holding my breath until the perfect abrupt ending happened.

No Halos in Hell has a substantial level of intensity with a very catchy chorus.  It’s emotional with the most beautiful and unexpected chords.  When I thought instinctively the note would go up, it went down, and vice versa.  There is an excellent solo in this song, engulfed by exquisite melodies, with a trademark Jesper melodic sound.  Jake E.’s voice on this one is fantastic.  It’s a great song to represent the namesake of this album.

Battle From Within.  The impact of the use of fans in this video is very powerful.  A simple, yet creative video that packs a powerful message.  If you haven’t seen it, I’d recommend you do. “Battle From Within,” is very appropriate and timely for most all of us.  “These wounds won’t heal…please sing for me.”  In reality, intentional or not, that statement is actually what we beg Jake E. and Jesper to do for us; they sing what we feel.  They allow us to put a sound and words to our feelings.  They help us to show others what we can’t say.  They provide substance when we are mute.  I once read an interview with Richie Blackmore where he said that Joey Lynn Turner could sing the phone book and make it sound good.  Well, Jake E. would sing it better (and I love Joey Lynn Turner.)  Jake E. is a rare talent that can make you hear the words he sings without the actual word…strictly through tone, inflection, and a bunch of other vocal words that I have no idea what are…  This song is modern and classic, and will hug you and give you chills at the same time.

I Am the One is a crisp, heavy, catchy, song that nicely showcases Jake E.’s incredible vocal range.  It’s an interesting mix of heavy and mainstream: complicated but not, simple but complex.  It’s full and then within one second it becomes fine…not thin, but fine.  Synth heavy with a heart-felt solo, this song is a strong contender to be my favorite.

Bye Bye Forever. This song, if it had one more “bye” could make you think of N’Sync, but luckily it only has two and is not at all similar but for that word.  It has the loveliest drum pattern I’ve heard in a long time.  It’s another clever song with raw emotional “real-life experience” lyrics that we can all relate to.  The beautiful acoustic break feels like contemplation and then getting stronger and stronger with each “heart beat.”

The substantial ending is satisfying.  During this song I was compelled to think of my own loss, my own rebuilding, my own journey over the past few years.  Soul searching is no joke.  If you’ve been through it…congratulations.

Dreams Gone Wrong has a line in it that says, “Nightmares belong where dreams gone wrong.”  How clever (and true).  Beautiful, classic Cyhra that is fast paced with an interesting second voice on the verse just underneath Jake E.’s voice.  There is an interesting break at two and one half  minutes in.  Jake E. hits notes beautifully throughout and the ebbs and flows of this song make it incredibly interesting.

Lost in Time.  Epic.  Stripped down, but breathtaking.  Jake E.’s voice is so strong and pure.  The note crawl he is/will be known for is super prevalent in this 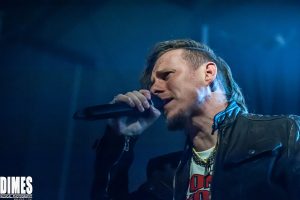 song.  This is the song that made me cry; it made the hair on my arms stand up and gave me shivers.  Jake E. absolutely and unequivocally proving that his voice is one of the best.  I can’t wait to know every note, and breath, and lyric in this song so that I can sing it at the top of my lungs…in the car…when no one is near.  Upon the second listen to this song (because I hit repeat immediately after it was done), I found myself acting like a conductor with my dog and cat watching confused, as I waltzed around the room (no one was home).  This song will penetrate you.  Truly.  And it will more than likely make you cry.

Kings Tonight snaps you out of it very quickly with its fast, classic guitar.

I Had Your Back is one of my favorites on this release. Again, there is so much going on subtly behind the main melody.  It’s pounding, pretty, and gritty.  This song has a bit of everything in it.  Stellar drumming, piano, amazing guitars, synthesizer, classical elements, with a beautiful fade.

Blood Brothers is fast-paced, allowing Alex and Euge to really shine.  The drums and acoustic guitar make it feel almost tribal yet could be the soundtrack to a movie.

Hit Me.  I love the mix on this song.  The right/left panning is fun.  A poppy, radio friendly song.  I can compose an entire movie in my head during its 3:47 minute run.  There are heavy parts and unexpected changes in intensity; it’s another solid song.

Man of Eternal Rain.  Alex is a stellar drummer.  That is what I was left with at the end of this song.  That is a statement that will likely ring true for every single person who hears it.  The solo makes me want to cry, and then run really fast.  Awesome ending!!

I’m just going to review one song on the digi-pack because it’s my favorite song on the release.  The other five I’ll leave for discovery.

While checking out interviews from the men of Cyhra on the making of “No Halos In Hell,” I found some quotes that I think make good sense after hearing this album.

In summary, while obviously personal to the band, “No Halos in Hell” allows us to claim it as personal too.  Jake and Jesper have a unique magic between voice and guitar…blending human and instrument into one. Alex and Euge’s adeptness at their instruments and their contribution creates a stunning release.  The men of Cyhra have discovered that perfect combination of talent and songwriting that is heartfelt and timeless and they seem to do it with ease.  The release communicates raw vulnerability and strength with a refined polish.  Once again, Cyhra have made it clear that being human is an experience we all share, and we are never alone.

Cyhra has written an album with a unique yet familiar sound, a cohesive assembly, allowing each song to have its own independence.